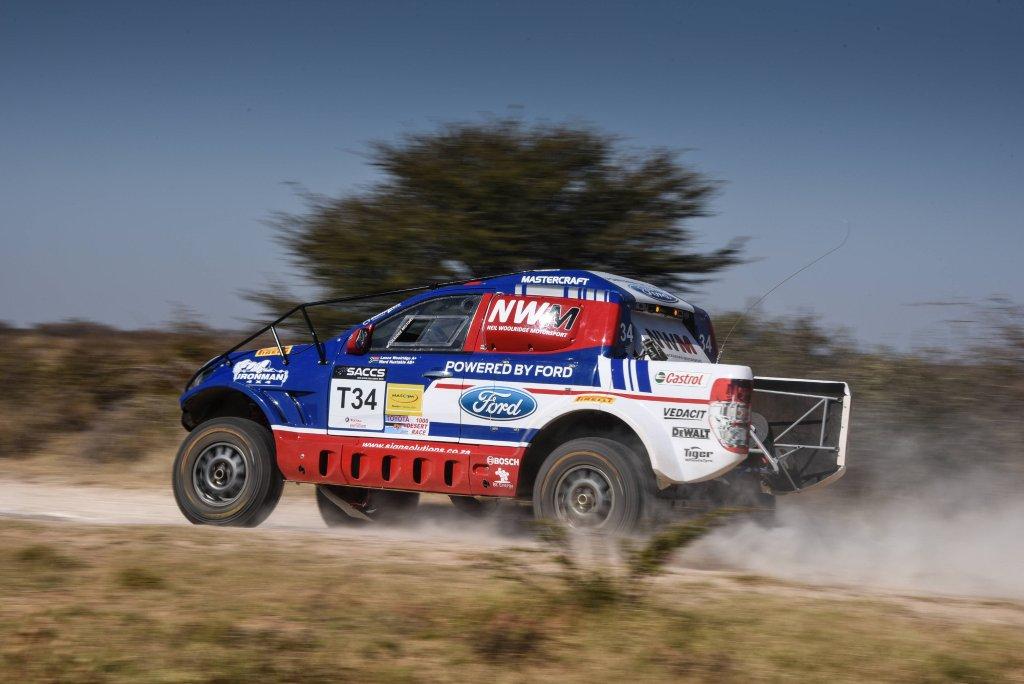 Brian Joss – The Ford Neil Woolridge Motorsport (NWM) team enters the second half of the 2018 SA Cross Country Series (SACCS) leading the Class T championship, and their main objective at the upcoming Atlas Copco 400, on 3 and 4 August, will be to extend their advantage.

As the fourth round of the fiercely competitive SACCS, the Atlas Copco 400 will see the teams charging through the dry and dusty maize fields around Bronkhorstspruit on the eastern border of Gauteng.

Points leaders Lance Woolridge and Ward Huxtable (T34) have proved the class of the field this year, taking victories on the opening two rounds, as well as the Race 1 win at the Desert Race in Botswana in their mighty NWM Ford Ranger. Unfortunately, their hopes of claiming a clean sweep of trophies in the second heat disappeared when their vehicle suffered a broken rear crown wheel and pinion, and they are intent on returning to the top step of the podium at the next race.

This will be particularly important for the championship, as the reigning title holders, Johan and Werner Horn (Toyota), scored the Race 2 win in Botswana, and closed to within seven points of the Ford crew.

“Lance and Ward have done an amazing job this year, and our Class T Ford Ranger is the best it has ever been with extensive work done on the suspension,” says Neil Woolridge, NWM team principal. “Dropping out in Botswana while in the lead was very disappointing, but we have stripped and rebuilt the vehicles completely after the beating they took in the desert.

“We have a very strong package this year, and it should suit the fast and flowing nature of the Highveld terrain.”

Ford NWM team-mates Gareth Woolridge and Boyd Dreyer (T77) have a point to prove after a difficult start to their season, despite being consistently among the front contenders during the short but intense qualifying sessions.

The young pair are currently fourth in the championship, and are determined to make up the eight point deficit to third-placed Gary Bertholdt and Geoff Minnitt (Toyota).

For the Brazilian X Rally Team of Marcos Baumgart and Kleber Cincea (T20), their two outings so far in this year’s SACCS have been very successful.

They earned a commendable third place at the season-opener in Dullstroom, followed by a combined third overall at the tough three-day event in Botswana.

As the current leaders of the Brazilian cross country championship in another NWM-built Ford Ranger, Baumgart and Cincea hope to continue this good form while getting to grips with the much rougher and more challenging racing conditions in SA.

The Atlas Copco 400 action kicks off on Friday, 3 August at the Soetdoring Function Venue on the outskirts of Bronkhorstspruit, with a 40km sprint qualifying loop that determines the starting order for the main race.

Competitors will complete two loops of the 170km course on Saturday, with fans being given the opportunity to meet the teams during the scheduled 20-minute service and regroup in the pits at the halfway mark, from about 10.30am to noon.

Fans can follow the cross country action, and track the position of the crews during the race, on the RallySafe app which can be downloaded free of charge for iOS and Android devices.