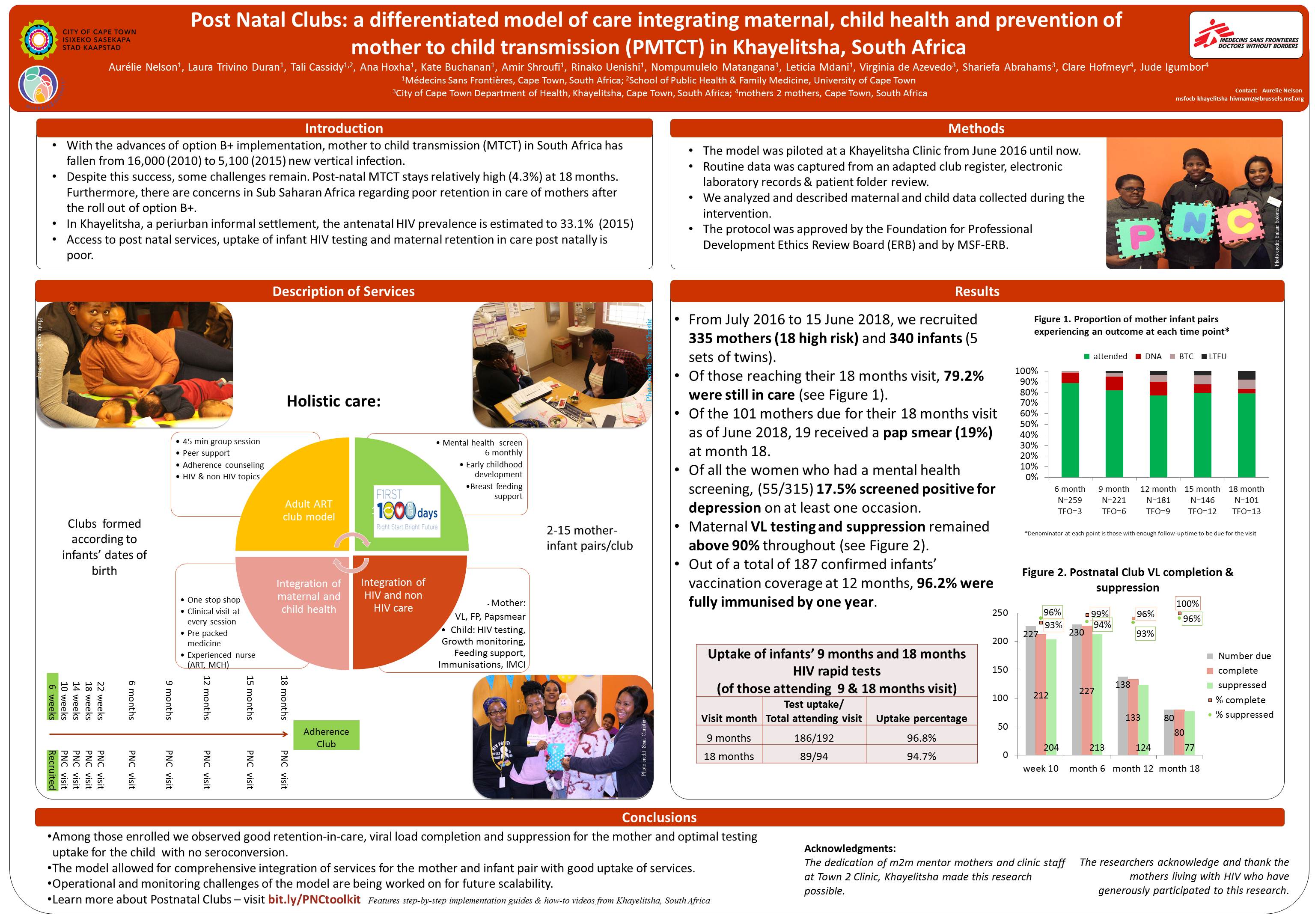 Tomorrow Doctors Without Borders (MSF) releases inspiring results from a unique integrated healthcare programme for HIV-positive mothers and their uninfected infants in Khayelitsha at the 22nd 2018 International AIDS Society Conference hosted in Amsterdam.

Piloted in partnership with international non-governmental organisation, mothers2mothers (m2m) and the City of Cape Town, the “Postnatal Clubs” (PNC) approach out performs the current standard approach at providing mother and infant pairs with the healthcare they need in the first 18 months. Results show significant improvements in retention in care, HIV treatment adherence, and patients’ interaction with the health system.

“It is really encouraging that 82% of moms and tots have been retained in care at 18 months, considering that the retention rate in standard care is 34%. Furthermore, at 18 months not a single one of over 100 infants who completed the pilot programme had been infected with HIV, whereas in standard care an estimated 4.3% of infants born to HIV positive mothers are infected at the same stage,” says Dr Aurelie Nelson, an HIV doctor with MSF in Khayelitsha.

The results further show that PNCs recorded higher infant testing rate of 94% for HIV, as compared to 33% in standard care and excellent viral suppression rate of 96% among mothers, while proving extremely popular with participants.

South Africa’s antiretroviral programme has reduced HIV transmission from mothers to infants from 25-30% before 2001 to around 1.4% currently. However, with levels of HIV transmission estimated at 4.3% occurring between 10 and 18 months, more efforts are required. These levels are partially due to poor retention of mothers and infants in care after birth, meaning that mothers stop taking their treatment, which increases the risk of HIV transmission through breastfeeding as the virus once again rises to detectable levels in their blood. Reasons for low retention to care include: arduous clinic waiting times and onerous travel costs to reach care; mothers not disclosing their HIV status to people close to them; a lack of partner involvement, and more.

The successes of the PNC programme comes with strong peer, psychosocial and early childhood development support. In PNCs, groups of HIV-positive mothers together with their uninfected infants have educational or support sessions with HIV-positive mothers trained in counselling, and from then on, both the mothers and their babies get so see an experienced nurse at the same time, thereby sparing them from long and different queues for themselves and their babies and from visiting the clinic on different days.

More PNCs will soon be rolled out at a second public health facility in Khayelitsha.

MSF and m2m now call for national uptake of the PNC model in South Africa and for PNCs to be adopted in other countries with high rates of postnatal mother to child transmission – partially attributed to poor retention of mothers and infants in care after birth.