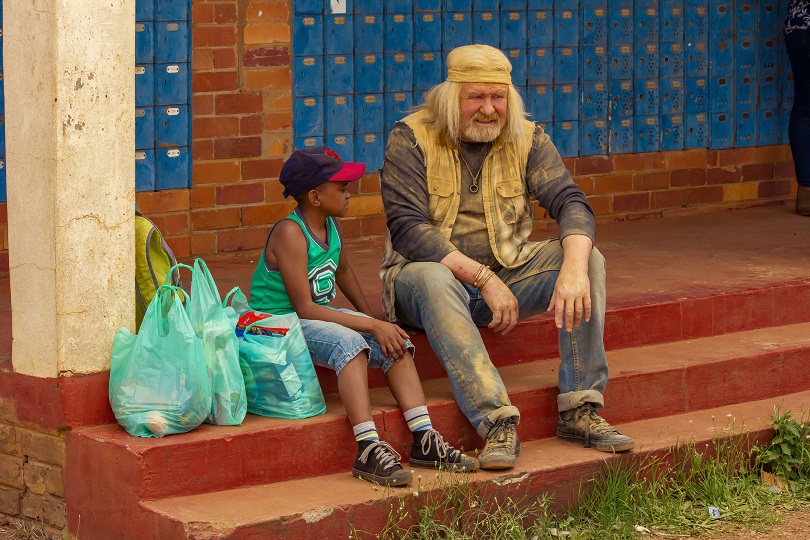 The first sneak peek of funny man Leon Schuster’s latest quirky comedy, FRANK & FEARLESS, has just been released on social media and it is clear that audiences are looking forward to this film, because the teaser trailer is spreading like wildfire!

In true Schuster fashion, FRANK & FEARLESS, follows the hilarious and heroic antics of four loveable characters in the African bush, but also introduces a relevant and engrossing story and a depth of emotion which sets it apart from anything else previously produced by Leon whose films, like Mr Bones and Mad Buddies, are some of the highest-grossing local productions with impressive international sales.

The film, written by Gray Hofmeyr, Leon Schuster and Geoff Newton, was created by a dynamic team of experts, with acclaimed filmmaker Gray Hofmeyr as director and André Scholtz and Menzi Thabede as producers. Hofmeyr has been in the industry for many years and created various award-winning South African box office hits, including the first Jock of the Bushveld, Leon Schuster’s Sweet and Short, There’s a Zulu On My Stoep and more.

Set in Africa, the movie takes you on a thrilling adventure as a loveable old man, Sonny Frank (Leon Schuster), and a ten year old rural African boy, Fearless (Themba Ntuli), set out to kidnap the ambassador of a South-East Asian country in an attempt to stop rhino slaughter. They are joined on this mission by two four-legged friends; Reini a baby rhino whose mother was killed by poachers and Fearless’s big and faithful black dog called Dog. When things go terribly wrong, they have no choice but to take on a platoon of merciless poachers, who are led by the terrifying ranger turned poacher, Dolf (Kenneth Nkosi), with whom Sonny has a past. The emotional heart, of course, stems from the characters’ individual journeys.

Aside from brilliant cinematography, the movie also boasts high-tech 3D animation (Luma Creative Studio), animatronics (DreamSmith) and special effects (Refinery), as well as impressive performances by the star-studded cast. Leon Schuster is brilliant as an insecure railway chef and collector of indigenous spices, while newcomer, Themba Ntuli (Meerkat Maantuig), nails his role as a complex African child who is terrified of his own shadow. Kenneth Nkosi (Tsotsi), Khanyi Mbau (Happiness is a Four Letter Word), Jennifer Steyn (Goodbye Bafana, Madam and Eve) and David Dennis (Soul City) can also be seen in the film.

Strap in and hold on tight to your seats, because FRANK & FEARLESS promises some incredibly funny laughs combined with a powerful message and some heartfelt personal revelations that will keep audiences captivated until the credits start rolling.

The film was produced by Thabede Menzi Films & Dapple Films, in association with M-Net, Film Chrome, the IDC and the DTI and will be released in cinemas by Filmfinity (Pty) Ltd. on 23 November 2018.