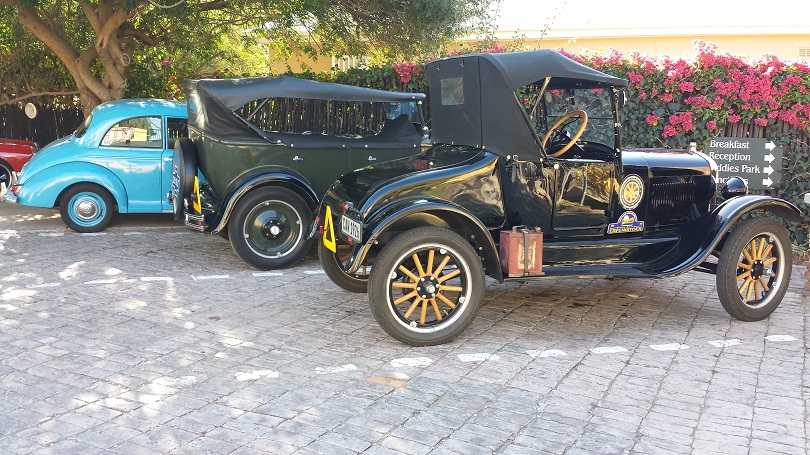 George – The 7th Heritage Tour of the Southern Cape Old Car Club (SCOCC) will be visiting the West Coast from 21 – 25 September. The Heritage Tour celebrates National Heritage Day, and a visit to the Westcoast will provide an opportunity to admire Namaqualand’s flowers that are in full bloom at this time of year.

The 2018 Heritage Tour is supported by Montego Pet Nutrition. Owners Hannes and Carol-Ann van Jaarsveld are based in Graaff Reinet in the Eastern Cape. “Although I have always been interested in old cars, my sons and I have only recently started collecting old cars and motorcycles,” said Hannes.

“We support the Heritage Tour because we love old cars. We believe our support can help conserve our rich car heritage for future generations.” They are the proud owners of 42 cars and 9 motorcycles, and they plan to open a new museum, called ReCollection Drives, in the Eastern Cape town.

Veteran and classic cars generate a lot of interest wherever they go, and residents and visitors to towns along the 2018 Heritage Tour route can look forward to a display of cars, some of which date back to 1915.

The 51 participants in 27 vehicles will arrive at Matroosberg 4×4 near Ceres on 21 September. On 22 September they will leave via Malmesbury, Darling, and Yzerfontein to Velddrif, where they will overnight in the Riviera Hotel.

The two oldest vehicles taking part in the 2018 Heritage Tour belongs to Philip Kuschke and Ockert van der Berg, who will both be driving 1915 Ford Model Ts. Phillip and Amanda Rosser will be traveling in the second oldest vehicle, namely, their 1926 Ford Model T. These Model Ts have become icons of the tour and excite a lot of enthusiasm wherever they go, with lots of townspeople who want to take their selfies with these grand old cars.

Mike and Susan Alexander will take part in their 1936 Plymouth Sedan, and Kevin and Desmond Casey from Harrismith in the Free State in their 1936 Ford Phaeton.

Most participants live in the Garden Route, but Jan du Randt and Jani Klomp will be traveling from Storms River in their 1962 Consul Capri 215, while Sydney and Daphne Young of Tulbagh only have to travel to neighbouring Ceres in their 1961 Morris Minor 1000 to take part this year.

The popularity of the British Morris Minor 1000 is illustrated by the fact that no less than five of them, manufactured between 1957 and 1962, will take part in the Tour.

The Southern Cape Old Car Club, which was founded in George in 1988, presents the George Old Car Show every year in February. The Show is preceded by a Veteran Tour, which in 2018 for the first time took place over five days. The Heritage Tour offers SCOCC members yet another opportunity to travel in their beautiful old cars, which are often lovingly restored from a bakkie-load of spare parts. They love showing off their collector’s items to an appreciating audience in all the towns they visit.

Contact Pierre Olivier, chairperson of the organizing committee, at 082 872 6456 for more information.