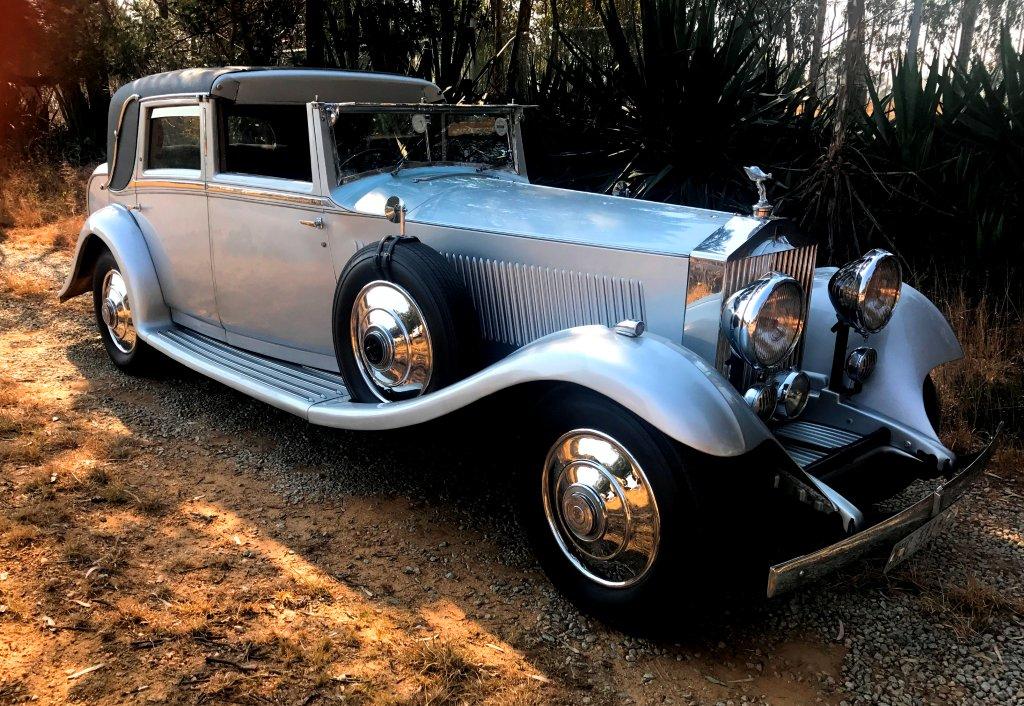 Brian Joss – The regal presence of a special-bodied Rolls-Royce Phantom II will ensure that it is one of the stars of Concours South Africa 2018, to be held over three days at Steyn City, Sandton, from August 10 to August 12.

This huge car, built in an era when Rolls-Royce could undoubtedly lay claim to the title of “Best Car in the World” will tower head-and shoulders above other entrants, and dazzle Concours South Africa visitors with its beautiful bespoke coachwork.

This long-wheelbase Phantom chassis was built in a style which saw chauffeurs of the era drive up front, un-protected from the elements, while the Lord and Lady of the Manor languished in cossetted splendour at the rear, sipping champagne and discussing the merits of Robert Frost’s poetry or perhaps the upcoming flower season at Harrogate.

Famous Phantom II travellers and revellers from that period included the Prince of Wales, the Duke of Windsor and silver-screen star Marlene Dietrich. A Phantom II also starred in the 1964 movie, The Yellow Rolls-Royce.

“This particular Phantom II has coachwork work by Barker of London,”

explains South African Rolls-Royce aficionado Marek Letowt. “The car is clothed in a style known as a Sedanca de Ville, which is denoted by its open front section and fold-back or upright fabric roof at the rear. The front of the car does, however, have a retractable cover for weather protection, when absolutely necessary, but generally the style was to drive the car with the front open and the rear enclosed.”

The Phantom II has an extremely diverse provenance. Built in 1934, it was exported to Kenya in 1952, returning relatively soon thereafter to the United Kingdom. The car spent time in France, before returning to the African continent, whereupon it resided in South Africa, South West Africa (now Namibia), Bulawayo (Zimbabwe), and then the Northern Cape.

The car, painted in an eye-catching combination of silver with a black roof and stainless steel detailing, is now the property of Dr Frank Snyckers of Westcliff, Johannesburg.

Letowt, an executive at Rolls-Royce Motor in Sandton, was a prime motivator of the 84-year-old Rolls entering Concours South Africa 2018. He cautions that this car will not be presented in anything approaching typical concours d’ elegance condition, but rather as a car with a restoration carried out many years ago, in a condition with plenty of patina.

“The owner, and indeed many Rolls-Royce marque enthusiasts, are well aware that various items, such as the upholstery, are not to the period-correct specification on this particular Phantom II. But this is a car that has been used and lived in and it has immense presence thanks to its magnificent radiator and gigantic wheels with stainless steel caps.

“The key elements of the car, such as the radiator with its thermostatically-contolled vanes, the Spirit of Ecstasy mascot atop the radiator cap, and the pair of side-mounted spare wheels with period hubcaps, are all present and correct. Inside it is notable that the dashboard, handbrake and gear lever, and the steering wheel are perfectly preserved, as is that distinctive Sedanca-style windscreen which can be swivelled horizontally or vertically.

“Another big plus for this rare Rolls is that it boasts 100 per cent original mechanical specification, and it is in such fine mechanical fettle that we believe it fully deserves its place in the concours line-up,”

Indeed, the full mechanical restoration of the car has been carried out by Marek’s father, Bogban Letowt, who himself owns an early 1930’s Rolls-Royce Phantom II. This car is currently undergoing a complete nut-and-bolt restoration.

The Phantom II was immensely powerful and fast for its day. It features a 7,6-litre six-cylinder engine with a four-speed gearbox, semi-elliptical springs and a rather unique up-draught carburettor, augmented by an auxiliary starter carburettor. It also featured one-shot lubrication and steering wheel-mounted adjustment levers for the carburettor and ignition timing. It was said to be easily capable of well over 80 mph (135 km/h).

This 1934 Roll-Royce Phantom II will be just one of 80 classics competing for honours at Concours South Africa 2018 at Steyn City on 10-12 August. The three-day show, with judging by international and national judges of the highest calibre, will be augmented by special events including the induction of Formula One designer Rory Byrne into the South African Hall of Fame on the Friday evening, and by the Concours South Africa International Classic Car Auction on Saturday evening, 11 August. This event will see over 80 of the finest classics in South Africa being auctioned by Coys of Kensington who will be receiving bids from clients all over the world.