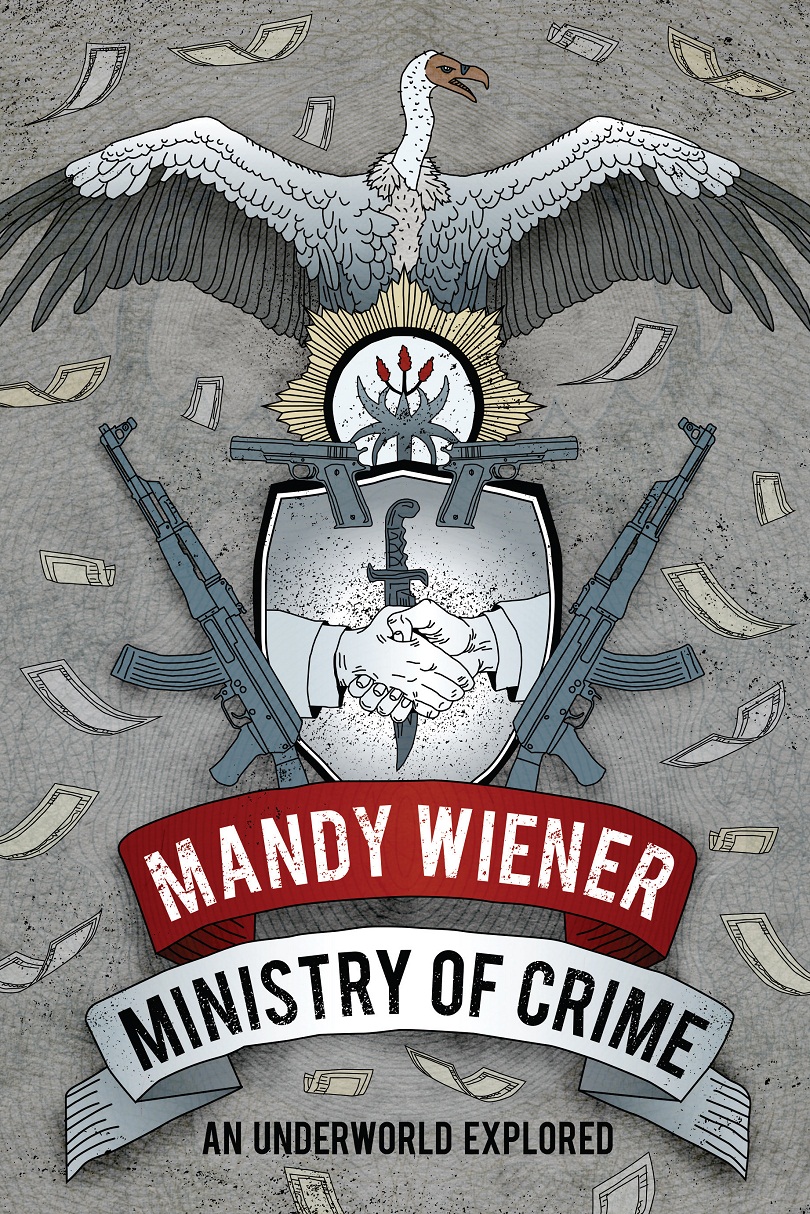 The first inklings of State Capture emerged at the trial of former Interpol head and South Africa’s police chief Jackie Selebi who was convicted of corruption. The corrupt cop’s trial was covered in Wiener’s other book, Killing Kebble.

However, Ministry of Crime is not about Selebi, it’s about one man, Radovan Krejcir, a Czech citizen and career criminal who was allowed to make his home in South Africa, where he corrupted cops, some powerful politicians, and tried to subvert the country’s justice system, with, it seems, the connivance of the Jacob Zuma administration and his acolytes who did their best to dismantle the institutions that were meant to uphold the law.

Key to the unmasking of Krejcir is forensic consultant, Paul ‘O Sullivan, who in turn was persecuted by police on what appeared to be trumped-up charges.

The book opens with a confession to Wiener. “It’s not as blatant in other countries. Nobody seems to give a damn. People corrupt politicians and they corrupt cops… It leaves the man in the street, and that includes me without hope,” said a career policeman who was pushed out by politicians because he got in their way.

“In this fertile landscape, organised criminal networks were able to flourish. Enterprising individuals like Krejcir, were able to grow empires, Wiener writes.

However, it was not only Krejcir that had free rein. Others included former boss of Teazers, the late Lolly Jackson; Lebanese drug dealer, Sam Issa; Jackson’s alleged killer, George Louca; Cyril Beeka, the gangster who was gunned down in the Western Cape; Nafiz Modack who has links to the security world; controversial Cape Town businessman, Mark Lifman; banker Alekos Panayi, who to put it mildly, did some money laundering for Jackson when he wanted to buy a Zonda, a mouth-wateringly expensive sports car. Wiener recounts their dealings in great detail and it doesn’t make happy reading. In fact, it’s terrifying to discover how deep into society their criminality extends, and what is more astounding is that they do it with impunity.

One issue that was a seven-day wonder in the Cape Argus and the Cape Times was that of Pierre Lodewyk Theron. Their main focus was the dealings he had with Community Safety MEC Dan Plato and allegations that top cop Lieutenant-General Jeremy Vearey allegedly received a R2 million payout from Krejcir, reportedly because Vearey was working for a gang boss to eliminate a 28s gang leader in the Strand. It was part of a smear campaign against Vearey, a former MK veteran and a member of Nelson Mandela’s bodyguard. The press in Cape Town only touched on the periphery of the story, but Wiener goes in to great detail about Theron’s claims which have yet to be tested in court. In an affidavit Theron implicates high ranking politicians including Marius Fransman, former ANC Western Cape chairman; businessman Mark Lifman who denies having any dealings with the Czech crime lord; ex-intelligence head, Richard Mdluli, who allegedly used a state security slush fund to buy luxury vehicles for his and his family’s use.  If Theron ever takes the stand, and if his claims are correct, a lot of people will have a lot of explaining to do, Wiener writes.

Krejcir and his co-accused including three Hawks members were finally convicted in the Bheki Lukhele case of attempted murder, kidnapping and drug-dealing, it was in spite of the police investigators, and not because of them. Judge Colin Lamont , who sentenced Krejcir to 35 years, lambasted  police for their shoddy (to put it mildly) work. Two of the cops who got a drubbing, Freddy Ramuhala and Bongani Gininda were promoted for their role in the affair by disgraced national police commissioner, Rhia Phiyega, who was later suspended for her part in the Marikana Massacre.

With Radovan Krejcir incarcerated, his audacious bid to escape from prison, was thwarted, someone had to fill that vacuum. There were some incidents in Johannesburg: the killings of former debt collector Raymond “Razor” Barras in Kensington who was linked to the illicit tobacco trade, and Ralph Stanfield, alleged 28s gang boss at Melrose Arch. But the real struggle for power is playing out in Cape Town which is being led by Nafiz Modack who has been linked to the Czech and Beeka. However, Vearey told Wiener that he doesn’t believe that Modack is a “figure of significance”.  At stake though, is the lucrative nightclub security industry.

Wiener also secured a face-to-face interview with Mark Lifman, one of the few journalists who has been able to do so. The interview came shortly after Jacques Paauw meticulously listed the businessman’s tax woes in his book. The President’s Keepers,  (Tafelberg) and what Lifman has to say is illuminating. He explained how he came to be at Zuma’s birthday celebrations at Vygieskraal Stadium in Athlone and his connection to Marius Fransman, “who he knew from his escort agency where he was a regular customer”. Lifman also opens up about his involvement with some of Cape Town’s top gangsters and with the Russian, Yuri Ulianitski, who was shot to death after leaving a restaurant on Woodbridge Island, Milnerton. Lifman was at dinner with him that night but denies any connection to the killing.

Sometimes things have unintended consequences. In this case it was a letter Modack sent to his nightclub customers wishing them  a “happy fest of season” and at the back was a note that in 2018 they would charge double for their services. The bail application, after his arrest, opened a Pandora’s box as details of gross police corruption emerged.  Vearey was instrumental in overseeing the  arrest of the seven people involved. Modack doesn’t know if he will be arrested again but he is carrying on his business, accompanied by a security detail. Still, there are many unanswered questions about Modack’s close association with politicians, including Zuma’s son, Duduzane with whom he was photographed at the One&Only at the V&A Waterfront.

Truth is often stranger than fiction and Ministry of Crime reads like a first-class detective thriller. Wiener is an award-winning journalist and author of Killing Kebble; My Second Initiation and Behind Closed Doors about Oscar Pistorius which she co-authored with Barry Bateman who was one of the first reporters on the scene.

In Ministry of Crime, sub-titled, An underworld exposed, Wiener is the messenger and doesn’t pass judgement. It is up to the reader to decide whether our crime-fighting organisations have been captured by corrupt cops and people like Krejcir who go about their criminal activities without let or hindrance.

The images include an organogram which show how it all ties up. An index would have been useful.