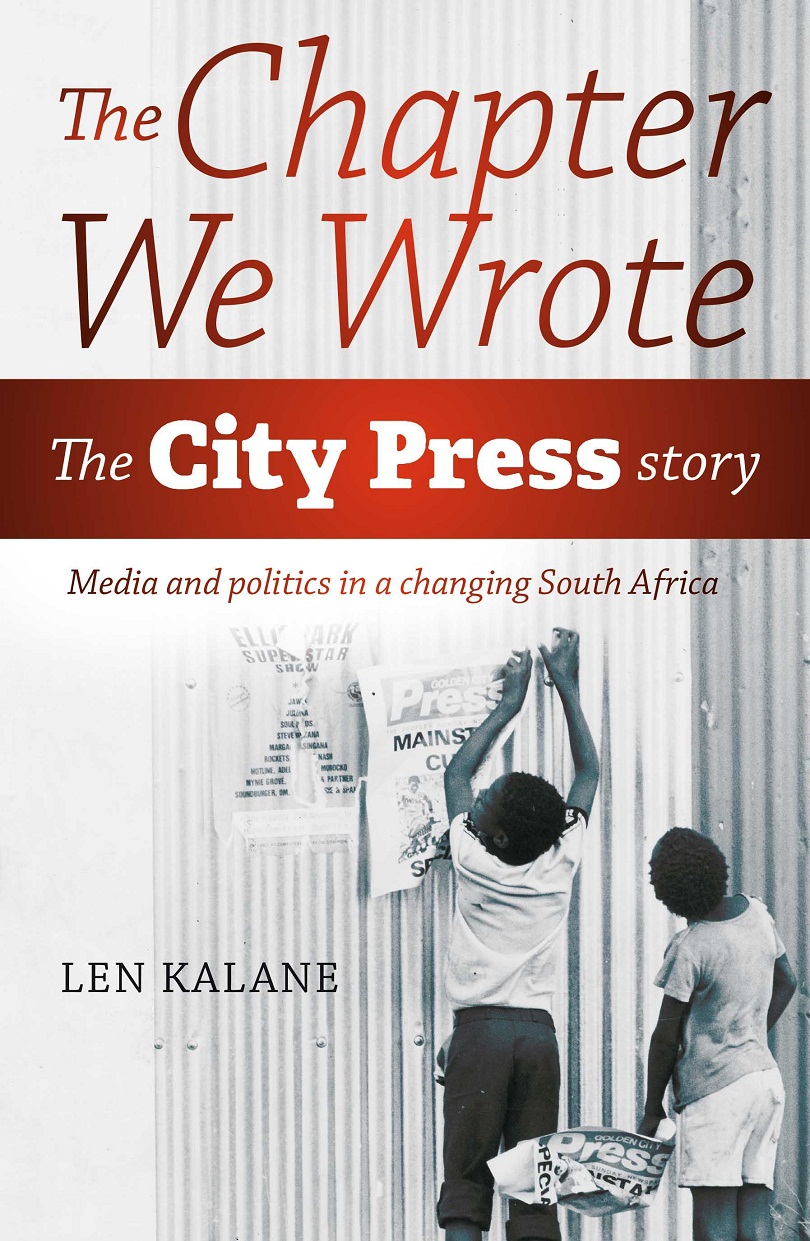 The success of City Press probably exceeded the expectations of its founder, the legendary Jim Bailey, who changed the face of journalism and publishing in South Africa when he launched Drum, aimed especially at the black market. It’s much more than the history of a great South African newspaper that had its genesis at a boozy meeting when Bailey mooted the idea of a paper along the lines of the wildly popular Golden City Post. It’s a microcosm of the country’s history through the most repressive years of the apartheid regime to the dawn of democracy with the release of Nelson Mandela and beyond told by Len Kalane who saw it all and reported on the events that shaped us, from the trenches, so to speak.

One of the surprises in The Chapter We Wrote, sub-titled Media and politics in a changing South Africa, is that the media giant, Naspers, then Nasionale Pers, did something extraordinary, as Kalane points out, they bought City Press, Drum and True Love, because they saw then that apartheid was on its way out. It was a masterstroke, writes Kalane,  as the three English publications were considered the leading anti-apartheid “black voices”.

It’s not only the story of City Press, it is also a history of journalism during some of the most turbulent times the country suffered through; it is also gives a brief glimpse of DF Malan, HF Verwoerd, the men who designed apartheid and the obdurate PW Botha, who if he had dared to cross the Rubicon all those years ago, the South Africa might have been a different country. The book also examines the rise and rise of the ANC until the new dawn of democracy was ushered in by the first black president, Nelson Mandela. It is also the story of the men and women who were there from the beginning and their names read like a roll of honour: the first editor, Phillip Selwyn-Smith; deputy editor ZB Molefe, the indefatigable Des Blow; Drum editor, Stan Motjuwadi, and Barney Cohen, True Love editor, were at the event when the then Nasionale Pers announced the buy-out. As was the doyenne of black journalists, Percy Qoboza, who was editor of The World until it was banned by the National Party government on Black Wednesday, October 19 1977. Kalane was earmarked for the job but it was given to Qoboza first. Later Kalane was appointed editor. The Chapter We Wrote is also a tribute to Qoboza, a long-time friend of Kalane’s, and a few of PQ’s cutting columns are reproduced in the book.  They are written from the heart and worth reading even if you have read them previously.

Kalane examines some of the more seismic events that shaped the landscape as we know it today. One of these is Muldergate, or Infogate when the National Party set up the Citizen with taxpayers’ money and tried to buy various overseas publications in a bid to change the world view of South Africa which was often called the pariah state. The idea was the brainchild of Eschel Rhoodie, then Secretary of Information, who when he was a press attache in the Hague helped to establish a pro-government magazine To The Point. When the Bailey publications were sold in 1984 there was considerable speculation about the motive for the buy-out. Kalane’s take on the issue helps to clear the murky waters surrounding the deal, much of which has not been in the public domain until now.

Kalane, in 1985, as news editor of City Press, was in the centre of the action, and instead of  computers there were telex machines that spat out copy from SAPA and other wire services.  It was around this time that there was the first inkling that things were about to change in South Africa. By then Mandela was in Pollsmoor and a request by City Press to interview him in 1986 was turned down because the government had begun the sensitive negotiations that would lead to his eventual release. A year later Qoboza began receiving letters from Mandela, “one of the privileged few on the revered ANC leader’s mailing list”, and Qoboza would often signal to Kalane when another letter arrived.

Kalane was news editor when rumours surfaced that Mandela was going to walk free. “This was a damn big story for us and the world,  but it was also a nightmare for news editors”, and plans had to be made to cover what was essentially a major news story. But life hardly ever goes according to plan. One of the reporters, Charles Mogale, who was one of the team assigned to stake out Mandela’s Orlando West home, recalls the events of that momentous day. “It was like waiting for the second coming”, he wrote. Even with all their contacts the City Press reporters were denied the opportunity to interview Mandela on his release. That honour went to Ted Koppel, the host of US talk show, Night Line.

ZB Molefe also recalls his meeting with Oliver Tambo in Botswana in 1993. It is the writings of the people who were there that bring the City Press narrative to life.

Kalane also looks at the state of journalism today and compares today’s writers with legends like Obed Musi and Can Themba, among others. One of the reasons for the dearth of black talent then was the insidiousness of the “Bantu education system” dismembering the legacy of the missionary schools. One of City Press’s reporters was Thokosile Masipa, now better known as the judge who presided over the Oscar Pistorius trial.

Kalane looks at forced removals and reporter Daniel Molefe recalls on the 30th anniversary of that tragic event, how he covered the story of the resettlement of the Mogopa people.  The chapter, Murder, She Wrote, features some of the crimes that made headlines. One of these is the capture of the kingpins of the Razor Gang. Another is the story of the Wire Gang which was brought to justice by the Soweto Murder and Robbery Squad.

Kalane also examines the decision by Percy Qoboza to publish an anonymous letter from Proud Afrikaner of Harrismith and the consequences, intended or otherwise.

Another chapter in The Chapter We Wrote is about the Guptas and the launch of the ill-fated New Age newspaper which was kept afloat by government advertising and their by now notorious New Age breakfasts, sponsored by State Owned Enterprises to the tune of R70 million. Then there was the launch of the Gupta’s television news channel, ANN7 on the MultiChoice  platform. Later the newspaper and the TV channel were sold to staunch Zuma ally Jimmy Manyi. However, New Age has now gone into liquidation and ANN7 is scheduled to be taken off air shortly. The question Kalane poses is why the government, in the interests of transformation, didn’t step in to help Thami Mazwai and his company Mafube which published Sawubona, SAA’s inflight magazine and others, from sinking. Not to forget the loan the Public investment Corporation made to Sekunjalo to acquire the Independent Media titles, the Cape Times and The Star newspaper, among them. Kalane points out that many people still believe that not a lot has been done to diversify media ownership.

The Chapter We Wrote is a fascinating look at the life and times of a well-respected newspaper that was founded on a dream,  the characters who made it what it is, and a brief history of South Africa.