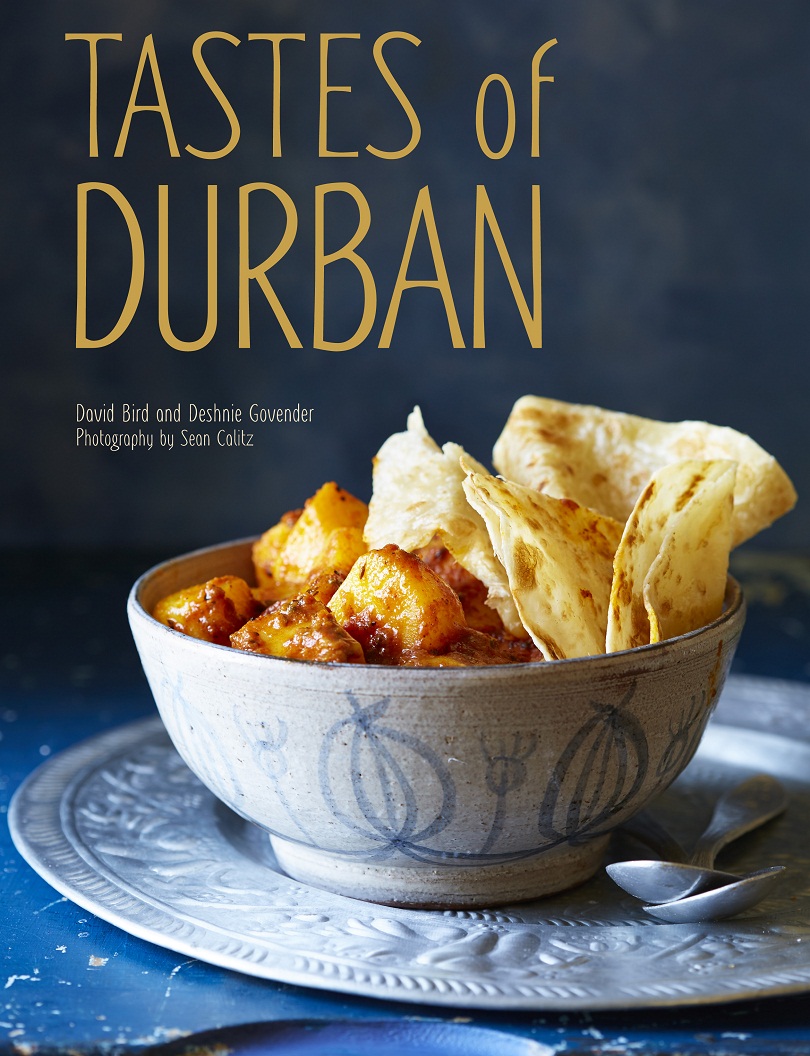 When you think of Durban, apart from the fact that for many people it is a holiday destination,  the first thing that springs to mind is curry or bunny chow which defines the Indian and Pakistani communities of the port city.

But the city, the largest in KwaZulu-Natal, is a melting pot of cultures including Portuguese; Britain and Zulus, and the various recipes in Tastes of Durban attest to the diversity of the people living there. According to Bird and Govender about one million people of Indian descent live in South Africa, most of them in KwaZulu-Natal. The Indians arrived as early as 1860 as indentured workers to toil in the sugar cane fields. However, they left an indelible mark on the menus with their breyanis, spices including the African bird’s-eye chilli and peri-peri sauce.  The Brits left their Roast Beef and Yorkshire Pud as well as the Toad-in-the-hole. The sea also had a profound influence on the cuisine and the annual Sardine Run is a prime example. Prawns, crab and lobster are often an integral part of the curries on offer. Zulu cuisine is traditionally based on grain but in recent times Chakalaka and Chisa Nyama have gained in popularity. Chakalaka is a spicy vegetable relish and Chisa Nyama is basically a braai where customers cook their own meat flavoured with various spices.

The book is divided into eight chapters: Soups and Sides; Beef; Lamb, Mutton and Goat; Pork; Chicken; Fish and Seafood; Vegetarian and Desserts. There is a comprehensive index and a conversion table. The images are by Sean Calitz.

Among the soups are a Portuguese Carrot Soup or Yellow Pea Dhal while salads and relishes include Tamarind and Mint Chutney and there is a recipe for Chakalaka, the real thing. And to accompany the curries, Bananas in Milk. Restaurants serve it with chutney to enhance the dish, but the milk (or yoghurt) neutralises the effects of the chilli. There is a variety of samoosas with different fillings and recipes for Naan and Roti.

Trinchado (African Beef Stew) is a Portuguese creation which has come down from Angola and Mozambique to Durban and the rest of the country. Espatada is another favourite as is Beef Curry. The Indians used the various spices to disguise the taste of the inferior cuts of meat the poorer classes used to eat.  There is also a recipe for the ever popular Prego Steak Rolls, which are usually served at pubs and drinking holes but are increasingly available at traditional eateries. The British contribution to the Tastes of Durban are Roast Beef with Yorkshire Puddings and Steak and Kidney Pie, to highlight two. So Colonialism couldn’t have been that bad. These dishes are in the section,  Beef.

There are numerous curry recipes in the chapter Lamb, Mutton and Goat.  They include Masala Lamb Chops; a Simple Lamb Curry; Trotters and Beans and Curried Goat. Goats are often used in Zulu culture to celebrate special events and rites of passage. Another traditional British dish is Liver, Bacon and Onions.

For many years, according to the authors, the Portuguese dominated the spice trade and their contributions include Marinated Pork; Sausage Chutney or Pork Pie to take on a picnic or served as part of a snack platter and these recipes can be found under Pork.

If you’re hooked on fish you’ll be spoiled for choice in Fish and Seafood. There are recipes for Tinned Fish Curry; Tinned Fish Breyani, with pilchards as the star of the show. There is a Fish Curry using tamarind juice to give it an unusual flavour. There is a Paella Durban-style and Portuguese Grilled Sardines. Salmon in Mango and Ginger Sauce is another tasty dish.

The authors haven’t forgotten the vegetarians among us. In the category, Vegetarian, you will find a Mixed Vegetable Curry; a Bean Curry and an Exotic Vegetable Curry.

For those with a sweet tooth, look no further than Desserts. Pride of place goes to that perennial favourite, Pasteis de Nata (egg custard tarts), a Portuguese speciality. Eccles Cakes, pastries filled with dried fruit and nuts were first sold commercially in Eccles, Greater Manchester, and were introduced to South Africa by the early British settlers. Of course, no cookbook featuring curries would be complete without a Lassi,  which originated in Northern India and is flavoured with various spices and this one uses dried fruit of your choice. Often, fresh mango is an ingredient.

The authors have included hints and tips for preparing soft-cooking potatoes; rice; using tamarind juice; turmeric powder and grated or tinned tomatoes. They also say if a recipe calls for a specific masala, Bombay or Madras, that is not available locally, you can substitute it with a mixed masala, but it does not apply to garam masala which has specific spices. If you’re puzzled about the names of some of the ingredients jeera is another name for cumin, coriander; dhania and cilantro are the same herb and soomph is another name for fennel.

Tastes of Durban will be a valuable addition to your cook book collection and help you broaden the boundaries of your culinary skills.