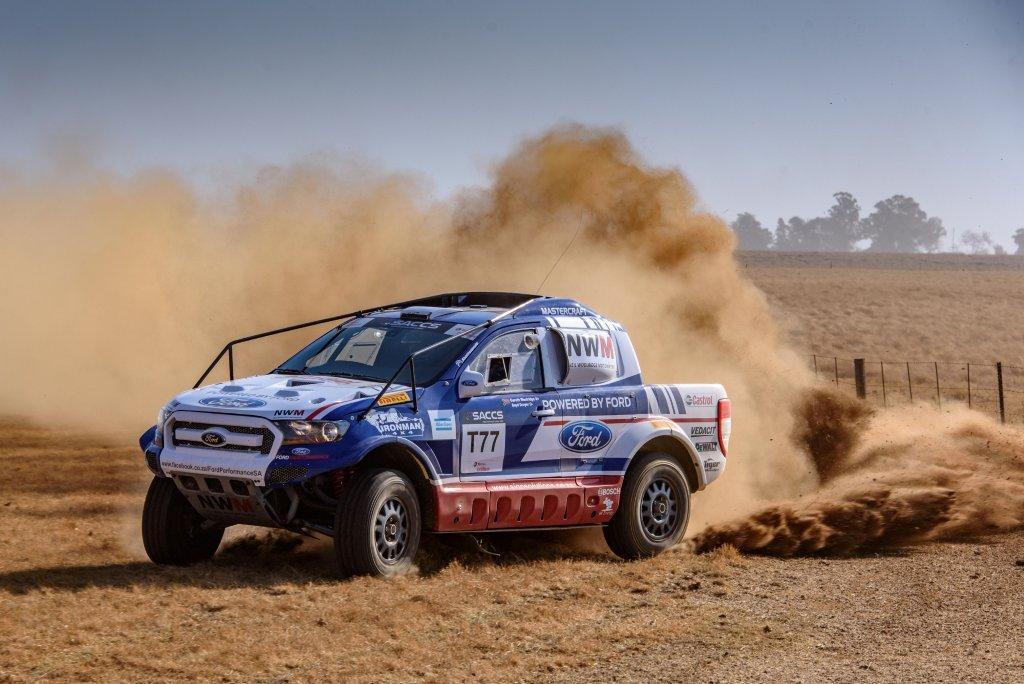 Brian Joss – The Ford Neil Woolridge Motorsport (NWM) team grabbed a crucial haul of points at the Atlas Copco 400 this weekend for the fourth round of the South African Cross Country Series (SACCS).

Held in the extremely dry and dusty farmlands of Bronkhorstspruit, located on the border of Gauteng and Mpumalanga, the race covered a total distance of 384km – making it a flat-out sprint for all the crews the moment the flag dropped.

Gareth Woolridge and co-driver Boyd Dreyer (T77) emerged as the top-scoring Ford NWM entry in Class T, finally claiming their first podium finish of the season after a difficult start to their 2018 campaign.

Arriving at the Atlas Copco 400 as the current championship leaders, the primary objective for team-mates Lance Woolridge and Ward Huxtable (T34) was to maintain their lead, and hopefully extend their advantage at the front of the field. Although the race didn’t quite go to plan, a fourth-place finish was enough to remain at the top of the points log with two races remaining.

The Brazilian X Rally Team of Marcos Baumgart and Kleber Cincea (T20) powered the third NWM Ford Ranger into a commendable fifth place finish, despite some early navigation issues in qualifying, and two punctures during the main race.

Throughout this year, Gareth and Boyd have been almost untouchable in the short qualifying loops, and once again they threw down the gauntlet on the opening stint of 40km to top the Class T running order with an impressive time of 31 min 50 sec – 27 sec ahead of second-placed Gary Bertholdt and Geoff Minnitt (Toyota).

Despite arriving at the Bronkhorstspruit race with a nasty dose of flu, Lance and co-driver Ward completed qualifying just 13 sec behind the Toyota crew to secure a third-place start position.

Marcos and Kleber qualified sixth after losing a bit of time when they took a wrong turn through one of the multitude of farm fences, but they were still reasonably well placed for the main race.

Saturday’s main race comprised two repeat loops of 172km each, with the dry winter Highveld terrain dishing up an astonishing amount of dust for the crews to contend with, along with a mix of fast open farmlands and a couple of challenging rocky sections to spice things up a bit.

Gareth and Boyd had their fair share of action on the opening lap, having to deal with two punctures, as well as the engine dipstick working its way loose and spilling oil onto the exhaust, resulting in smoke making its way into the cabin.

Once those dramas were dealt with, they then came across a fire in the veld, and stopped to put out the flames – with most of the time lost fortunately handed back to them by the race officials, but they had ultimately fallen behind Bertholdt and Minnitt in the running order.

The second loop was hassle-free for the young pair, other than having to contend with the race’s regional competitors controversially being dispatched onto the race route in amongst the much faster national crews, thus making the first 50km combined section a fraught affair for the front-runners.

Nevertheless, they enjoyed a fast and clean run to the finish to notch up a well-deserved second place, with the race win going to Bertholdt and Minnitt.

For Lance and Ward the first loop didn’t start particularly well either, losing a tyre early on which cost them time. On the second loop they joined a handful of teams that got stuck in the soft sand at the first road crossing and dropped over a minute as a result.

The rest of the race distance was completed without incident, and a tenacious drive through to the finish saw the #T34 Ranger cross the line in fourth place, a mere 17 sec behind championship rivals Johan and Werner Horn

(Toyota) who claimed the final step on the podium. This ensures that Lance and Ward remain at the top of the championship table by four points.

Punctures also plagued the first lap for Marcos and Kleber, but they managed the second loop without any issues – other than having to pass several regional teams in the thick dust. A fifth-place result earned the Brazilians another solid finish in the South African championship.

Neil Woolridge (Team Principal): “It has been a good weekend overall, coming home with second, fourth and fifth, and still leading the championship. It’s not quite what we were hoping for as we felt that we had the pace to win, but all three cars performed perfectly without a single mechanical issue.

Ultimately it was down to punctures which is so often the case in cross country racing – and in many other forms of motorsport.

“It’s an encouraging result for the team as they have been working like slaves for the past two months preparing these three cars, building a brand-new customer car and getting everything ready for the Rally dos Sertões next week in Brazil where we will be running five cars for the first time. It has been very tough on everyone, so it’s a credit to the entire team for the effort they have all put in. To have all three cars finish without any problems and still lead the championship is great.

“We’ve sorted out the minor niggles with the new direct injection 5.0-litre

V8 engine that we’ve run in Gareth and Marcos’ cars for the past two races, and as we haven’t had any reliability issues we will fit this engine to Lance’s car for the next race, so he can benefit from the extra performance.

He probably lost out a bit at this race due to the high altitude, but it will help him for the remainder of the season.”

Gareth Woolridge (T77): “We had a great start from qualifying but then everything seemed to go wrong on the first loop with the two punctures and then the dipstick coming out. We couldn’t figure out where the smoke was coming from, but eventually sorted out the issue. Stopping to put out the veld fire cost us a bit of time too, but fortunately we got most of our time back.

“It was very frustrating getting caught in the dust of the regional competitors for the first 50km of the second lap until they split off the race route, but it was probably the same for all of us and we really enjoyed the remainder of the race.

“We are glad to finally get an overall Class T podium finish this year, after having had such a difficult first half of the season.”

Lance Woolridge (T34):  “This wasn’t an easy race for me, as I struggled to

get into a rhythm during qualifying and had two overshoots, and then we lost a tyre soon after starting today’s first loop. We’re not quite sure what happened to the tyre, because when we stopped it had no tread left.

“Our pace was much better on the second loop, except for beaching the car in the soft sand at the first road crossing, which also happened to one or two of the other teams. We pushed hard for the remainder for the second lap, and although I felt we were going well, it just wasn’t enough to fight our way up to third place. At least we still lead the championship, which was our main objective going into this race.”

Marcos Baumgart (T20): “Kleber and I enjoyed this race, although the navigation was quite tough with all the twists and turns through the farm fences. During qualifying we landed up driving a couple of kilometres up the wrong side of a fence before realising our mistake, and we lost time getting back onto the route.  We had two punctures, and then a clean run on the second loop. We passed about five slower cars and the dust made it quite difficult, but we’re happy with our result.”

The next race is the Harrismith 400 in the Free State on 14 and 15 September.