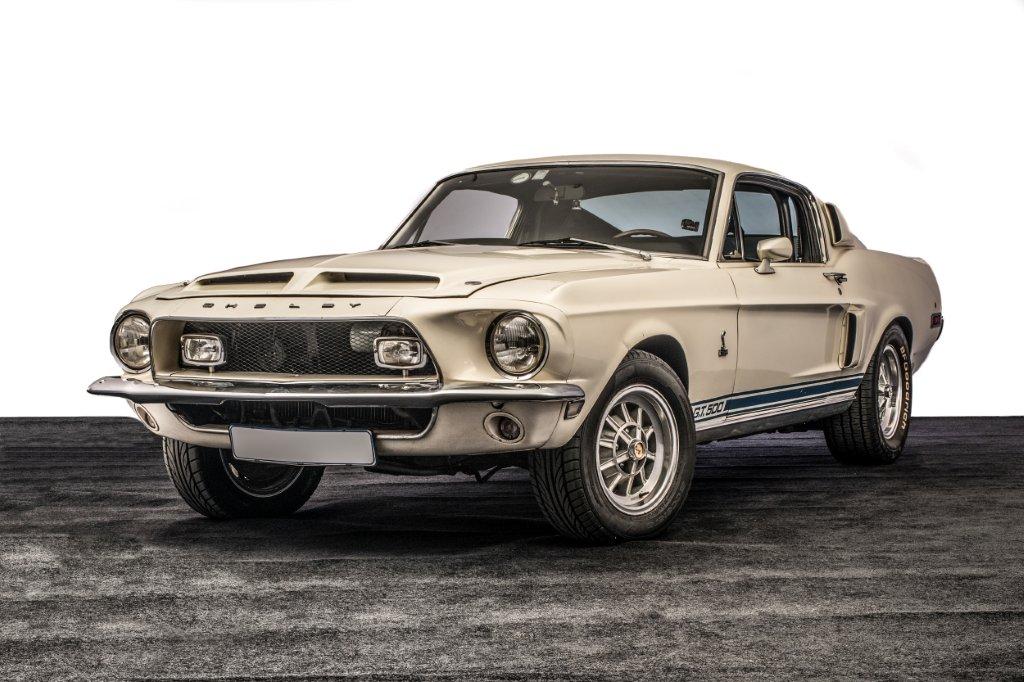 Brian Joss – The organisers of the Concours South Africa Classic Car Auction at Steyn City, on the outskirts of Sandton, on Saturday August 11, are expecting huge global interest in an original and unrestored 1968 Shelby Mustang GT 500.

The original special Mustang GT500, one of just over 1 100 examples produced by Carrol Shelby in conjunction with Ford in 1968, will go under the hammer at the auction which is being orchestrated by international classic car auctioneers Coys of Kensington.

Coys have already distributed their catalogue to some 25 000 of their clients and global bidding is expected to be intense for the auction which will feature almost 80 cars and some rare motorcycles.

The Shelby GT 500 is one of the 75 cars forming the Plit Portfolio, which will be auctioned, as one of the highlights of the three-day Concours South Africa 2018 spectacular. Johannesburg collector Wayne Plit is the third owner of the Shelby, which was bought new by a South African travelling in the US in 1968. The car was driven around the US, including a trip to Disneyland in 1969, before being shipped out to South Africa in 1970.

Soon after it arrived here it was acquired by its second owner, Johannesburg enthusiast Francois Lamprecht who owned the car for four decades before selling it on to Wayne Plit.

The car still wears its original Wimbledon White paintwork with Guardsman Blue door sill striping. It was ordered by the original owner with the high-horsepower KR-specification 428 cubic-inch V8, and also KR-spec dual fuel tanks. It still wears its original, unrestored 10-spoke alloy Shelby wheels and a T-bar Hurst shifter (also factory-original) for its four-speed gearbox. The engine has never been opened, and the original spare wheel is still in the boot.

This car was super-quick in its era, with a 0-100 km/h time under six seconds. Every single piece of trim and Shelby-specific equipment is present on the car, which has only covered 67 300 miles.

“This car may well be the only original, un-restored Shelby GT 500 in existence,” says Concours South Africa organiser Greg Marucchi. “The Mustang is only slightly patinated despite being half a century old, and we would advise the new owner who acquires it to preserve its originality as an absolute priority.

“A car is only original once. As soon as it has been restored it loses that factory-built originality which is irreplaceable. The wonderful thing about this Shelby is that it is still remarkably presentable in its original paint and trim. We would love to see it entered, as sold, at Concours South Africa 2019!”

Apart from the Mustang, there are many rare cars being auctioned at the Concours South Africa festival. One of these is a Renault Alpine A110 in the very rare 1600 S specification, which again makes it very desirable on the global market. The car was once owned by classic car racer Brian Evans, and is a 1973 model, that is believed to have resided in Angola and then Rhodesia before arriving in this country. Evans sold the car on to well-known motorsport photographer Danie van Jaarsveld, who then sold it to auctioneer and historic racer Shannon Winterstein. The car was bought by its current owner at a Johannesburg auction in 2016, and is very original, still with its factory-fitted roll cage and beautiful Alpine-spec alloy wheels.

Those with inside knowledge value the original Honda CB 750 K0 and K1 series models, launched in 1969, as amongst the most collectable superbikes in the world. At least one of these will be up for auction as part of the Plit Portfolio, and other rarities will include a mid-1960’s Honda CB450 “Black Bomber” in café racer guise, and a Ducati 750 GT. There will also be rare BMWs on the auction, and Harley Davidsons. And for those hipsters and mods out there, a pair of original Vespas will also be on the auction, along with many more rare, classic motorcycles One of the most beautiful Alfa Romeo sports cars of all time is the Giulia SS model with flowing Pininfarina coachwork. A red Giulia Sprint Speciale

2018 Auction, along with a Giulietta Sprint Veloce from 1962 and a trio of Alfa Romeo Spiders from the 1960’s, 1970’s and 1980’s. All these cars feature the classic Alfa Romeo Twin cam all alloy motor that built the marque its huge reputation for affordable sporting motoring, especially during the 1950’s through to the 1970’s. One of these is the very collectable 1600 Duetto round-back version.

Lovers of classic British cars will not be disappointed. Headlining the selection of rare Britons will be a mid-1930’s Singer le Mans, of which only three were ever built. Another beautiful British classic is the Alvis TD21 Saloon. This 1961 model features coachwork styled by the Swiss specialist Graber and crafted by Park Ward. And the Alvis features wire wheels and an enticing wood-panelled dashboard! Also on offer will be an Austin Healey BN1, one of the early Healeys that gained such a good reputation here in South Africa, a Jaguar XK120, a Triumph Spitfire, a Triumph GT6, and a number of TVR’s. There will also be a couple of original-spec Mini Cooper S models on offer.

To register to attend the CSA Auction, email auction@concourssouthafrica.com to book your seat.