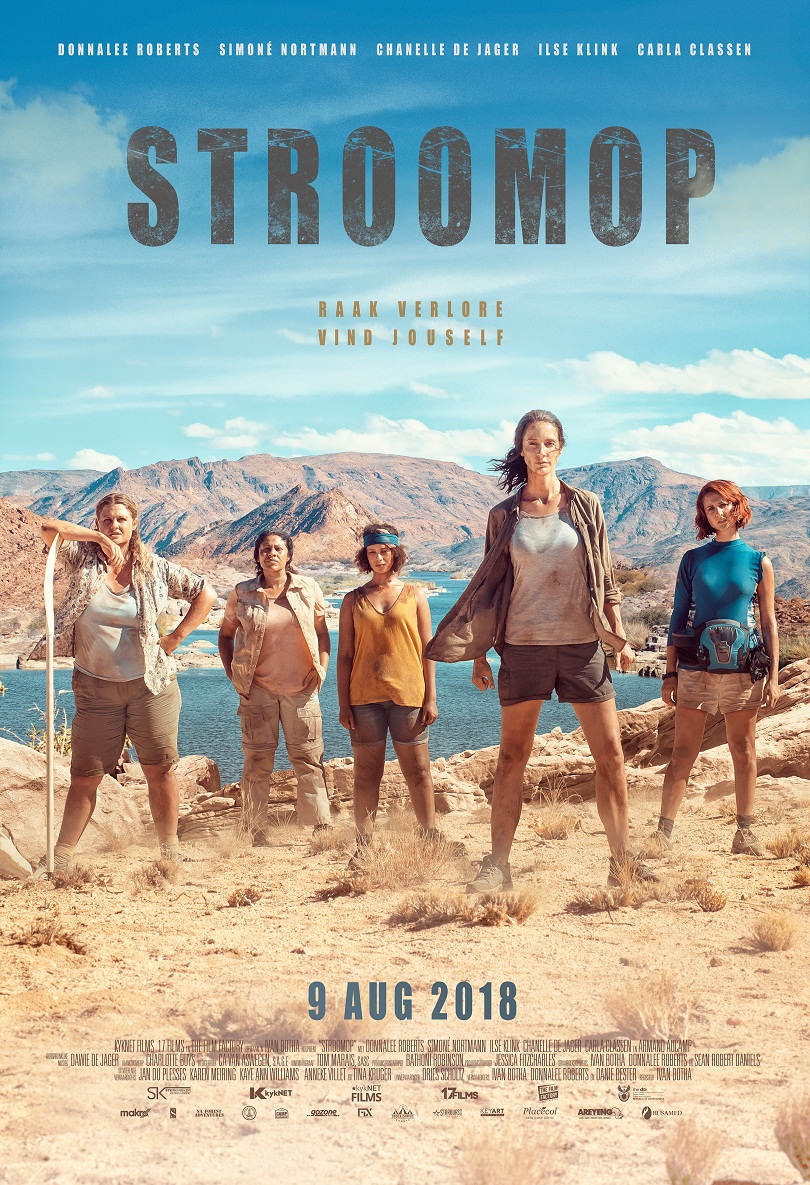 The exciting adventure film, STROOMOP, will open in cinemas nationwide on Women’s Day 9 August 2018 and bookings are now open.  Follow the links below in order to book your tickets now!

This film is about more than just life and death, it tells the story of five women – Lana, Vivian, Adrie, Diona and Nixie – who are being tossed about by life’s rough waters and drowning in their own lives. Coincidence takes them on an adventure on the Orange River. Here the unthinkable happens when their boat capsizes, the river guide goes missing and they find themselves in a battle for survival in the wilderness.

The journey irrevocably changes their lives as they struggle through the pain and fear together. Themes which the film explore include self-discovery, forgiveness, acceptance and healing.

“Sometimes you will have to swim against the current to discover that you are more than enough, and that you possess everything you need to overcome what the river of life may float your way,” says Ivan and Donnalee about the message behind this inspiring film.

The movie, filmed on the Orange River, near Onseepkans in the Northern Cape and around Johannesburg, is complemented by a strong cast:

Donnalee (Vir Altyd, Ballade vir ’n Enkeling, Pad Na Jou Hart, Klein Karoo, 7de Laan) plays Lana, a surgeon with a tragic past. “Lana is one of the most challenging character’s I’ve ever played. She takes life and her career very seriously and isn’t afraid to get her hands dirty, whether she’s trying to save a life or starting a fight. There is a reason why she is such a rebel, but she has a good heart,” says Donnalee about her character.

Vivian, the second Stroomop lady, lost her joy for life as a child and finds her life extremely boring, which worsens her daily tendencies towards depression. In an attempt to find acceptance after a terrible break-up, she tries to change herself into someone else. In the process, however, she loses herself completely. The character is played by Simoné Nortmann (Hotel, Wonderlus, Vuil Wasgoed), who describes her character as follows: “Vivian is a data analyst and it is clear that she is very unsure of herself. She likes routine and is taken aback by this adventure, which forces her to face her biggest fears,” says Simoné.

Chanelle de Jager (Egoli, Die Boekklub 1&2, Boland Moorde) says the following about her character, Adrie: “Adrie is the mother of three very busy children, whom she loves dearly. But she sometimes feels as if she is drowning, and that she needs to recharge her batteries.”   Adrie, like most women, neglects herself in an attempt to tick all her daily boxes. Somewhere along the line, though, she swapped her inner power and joy for busyness. She is in a constant battle with her weight and doesn’t see own beauty. As a result, she completely overlooks how beautiful she is to her husband.

In her heart, Diona is a mother first – strong, challenging and above all protective. These characteristics led to her becoming a lawyer who has climbed to the top of the career ladder. Unfortunately, and unknowingly, her success came at the cost of her family. After her husband’s death she desperately tries to repair her relationship with her daughter.   “Diona is a mother who neglects her family a little, because her career is so important to her,” says Ilse Klink (Isidingo, The Path, Villa Rosa, Roer Jou Voete).

Amid her studies in London, Nixie (Carla Classen –Howled and she forgot to say sorry, A Sense of Touch, 7de Laan) returns to South Africa, but this time with a secret she cannot share with her mother. After her father’s death she is becoming increasingly introverted, and she is uncomfortable with the relationship she now has to foster with her previously absent mother who simply cannot let go of the question “what happened in London?” “She is a 21-year-old millennial who is very involved with other people through her phone, but in real life she is an introvert. She goes on this adventure to try and come to terms with her father’s death,” she explains.

Armand Aucamp (Ballade vir ’n Enkeling, Die Boekklub 1&2, Krotoa, Knapsekêrels) plays the role of Guy, the river guide. “Guy is a man of nature, without an ego and very in touch with his emotions. He is accessible and breaks the preconceived stereotypes about how a man looks and what he is really like,” he says about his character.

STROOMOP’s script was written by Ivan Botha, Donnalee Roberts and Sean Robert Daniels from The Writers Block. The project was produced by 17FILMS and The Film Factory SA, in association with kykNET, and the Department of Trade and Industry (DTI). Distributed locally by Filmfinity, the film is scheduled for release in cinemas nationwide on 9 August 2018.