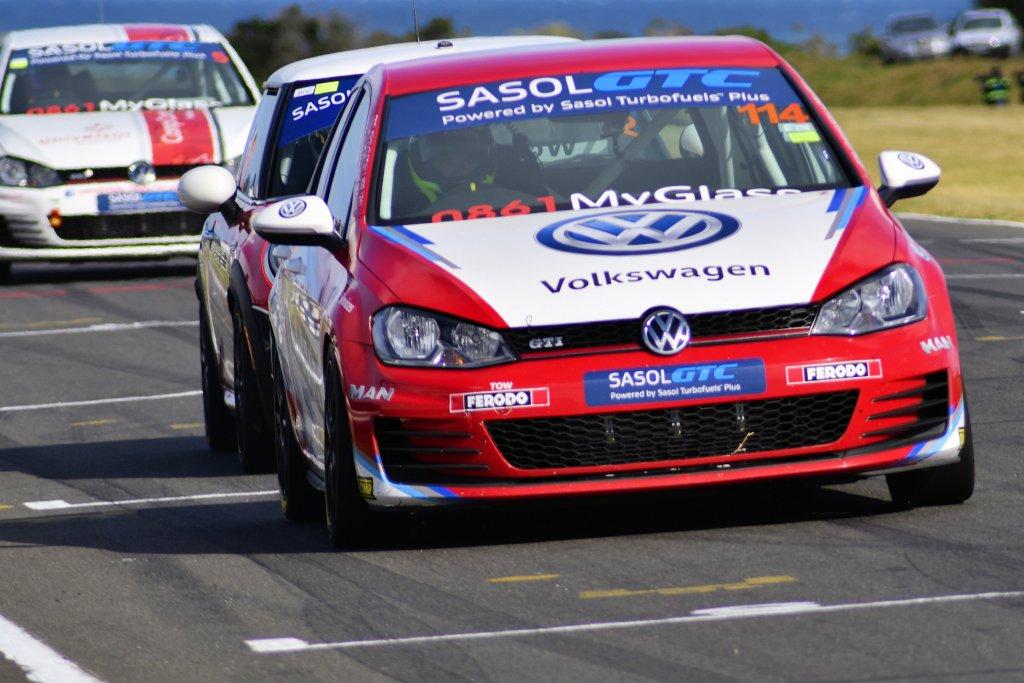 Brian Joss – With three wins in the Sasol GTC Championship to their name, Volkswagen Motorsport’s team of Daniel Rowe and Mathew Hodges head into round six with the aim of adding to their tally as the second half of the season gathers momentum.

The GTC2 Championship sees the current champion Keagan Masters at the top of the points standings with an 11 point cushion, having raced his Volkswagen Advanced Driving Golf GTi to five victories and three runner-up placings.

Adrian Wood, racing his Golf GTi in association with Kyocera, returns to his first repeat track of the year and has high hopes of moving up the order.

Facing three rounds in the next six weeks, the VW Jetta GTC pairing is well prepared following a successful test which has extracted more performance from the Jetta GTCs.

Daniel Rowe has banked victory at Killarney in Cape Town, Zwartkops in Pretoria and most recently at his home track in Port Elizabeth last month, marking Rowe as a danger man in the touring car series. “Zwartkops is a tricky place, being quite narrow and technical. We have uncovered more pace to assist our one-lap performance so qualifying is going to be interesting.

A good starting position is the foundation to a successful weekend.  The reverse grid second race has been good to me so I’m hoping our development will work and give me the pace to challenge for the podium in the first race”.

Mathew Hodges has endured a challenging first half of the season but signs of recovery were evident at Port Elizabeth last month when he raced at the front of the field before being pushed off the track by a rival. “I lost a certain second place at Port Elizabeth. It showed though that our  cars have race-winning pace and I’m really confident for Zwartkops. Qualifying is going to be a balance between finding the right pace without binning it as the race schedule in the next month is very tight. Knowing that my car is working well gives me a great encouragement for the races and I’m looking forward to it.”

GTC2 honours and has a plan to ensure he leaves the Pretoria track with as many points as he can. “My lead has been cut but it is still sufficient to allow me the luxury to choose when to fight and when to settle for the points on offer. I can take a conservative route and minimize risky manoeuvres. A top three in both races will be a satisfactory outcome for my championship.”

Adrian Wood is relishing round six after his best test session this year.

“Zwartkops should be a good weekend for me. I’m more comfortable in the car now than I have been all year. It’s not been my strongest circuit in the past but I expect to be competitive with Keagan. The pressure will be on to bring the car back in one piece as the next round is only two weeks later”.

Team Manager Mike Rowe is bullish ahead of the Zwartkops clash: “The team has worked incredibly hard to unlock more performance from the Jetta and based on testing times, we are in a very strong position for the rest of the season. Mathew had a good race last month while Daniel continues to impress.

The Golf GTi has been the benchmark all season and should remain the front-runners in the GTC2 class. Keagan continues to excel while Adrian is edging towards the front in every round. I’m expecting a solid set of results.”