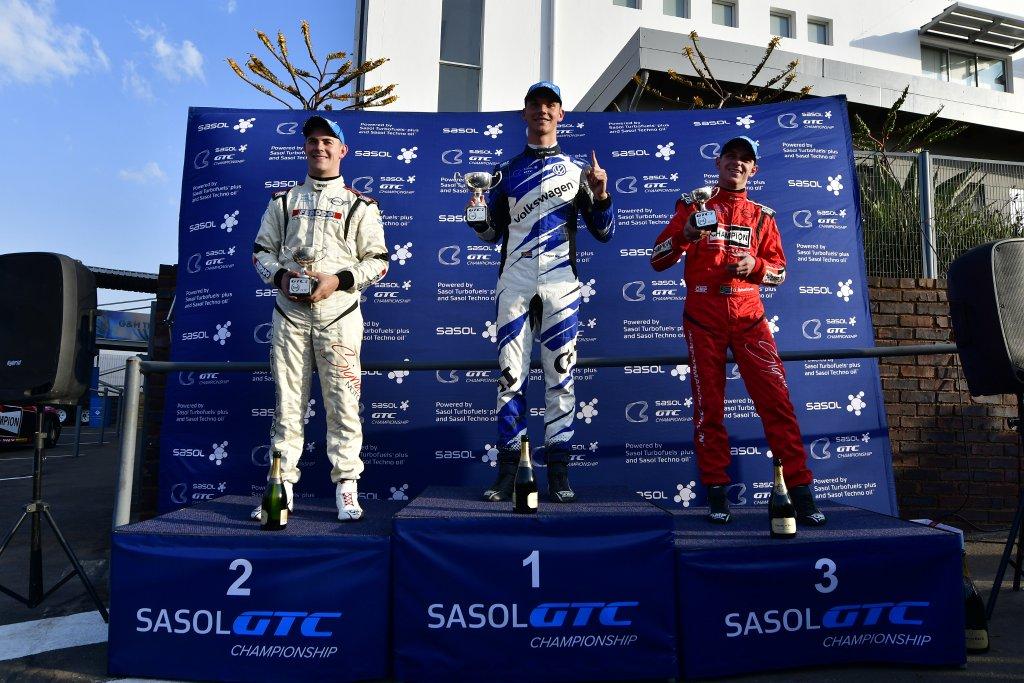 Brian Joss – Keagan Masters extended his Sasol GTC2 Championship lead with a masterful drive to a double race victory at round six of the campaign, while Adrian Wood claimed his career best result with second place in the first race.

The Volkswagen Jetta GTC team had a bruising day at the races, with Mathew Hodges forced out of the running with a mechanical issue and triple race-winner Daniel Rowe relegated to fifth and sixth places after an incident-packed pair of races.

Rowe and Hodges both struggled in qualifying to find a comfortable race set-up, ending sixth and eighth on the starting grid. Masters planted his Volkswagen Advanced Driving Academy Golf GTi on pole position, 0.1 seconds ahead of teammate Wood in his Kyocera-backed Golf GTi.

(BMW) on the opening lap while Rowe led a high-speed four-car race-within-a-race. As the race unfolded, Hodges slipped back while Rowe and Van Rooyen passed and re-passed each other on each lap. With three laps remaining Hodges peeled into the pits and retirement, while Rowe continued to his fight, crossing the line in fifth place.

Masters and Wood took off and were never headed although Wood came under pressure from third placed Devin Robertson (MINI); he drove a superb race to pass the chequered flag 0.3 seconds ahead of his rival.

Race two saw Rowe line up in second spot on the inverted grid. He was on the outside of the track racing into turn two and was passed by Van Rooyen. On lap nine, Van Rooyen spun out, allowing Rowe to set off after the race leader, Johan Fourie (BMW). On the final lap, Rowe pulled alongside his rival, who squeezed the Jetta driver and the two cars touched with both going into the gravel trap. Rowe dropped to a disappointed sixth.

Masters, from last on the grid, was into third place by lap four and chasing the race leaders hard. He caught and passed Robertson and set off to close the 3.5 second gap to Brad Liebenberg (MINI) with a series of spellbinding laps. On the final lap, the two youngsters raced side-by-side and Masters got his car’s nose ahead on the run into the final corner and out-draged his rival to the flag.

Volkswagen Motorsport Team Manger said: “The team took the wrong direction on set-up which left us a little on the back foot after qualifying. Mathew’s rotten luck has continued into round six, while Daniel had a busy race day and continues to have a solid season. The GTC2 team did us proud with a double win for Keagan and a second-place podium for Adrian”.

Volkswagen Motorsport’s next outing is at Kyalami on September 1 and 2, as part of the Festival of Motoring with one race on each day.