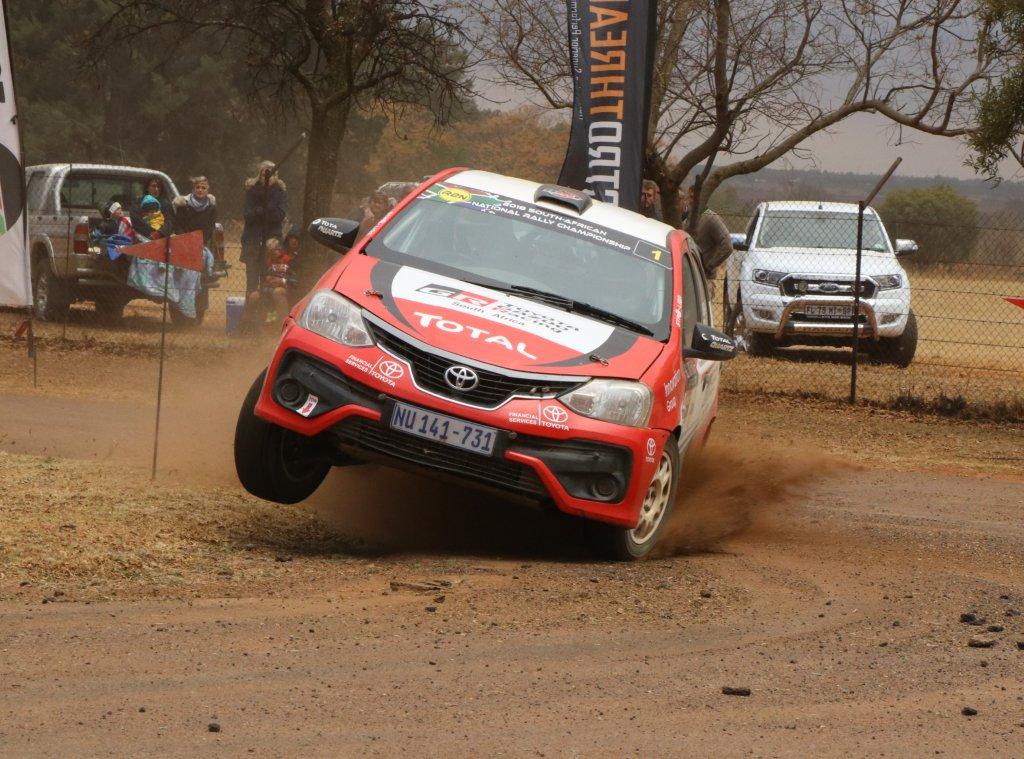 Brian Joss – Toyota Gazoo Racing SA’s Guy Botterill and co-driver Simon Vacy-Lyle made it four wins from five starts, when they recorded a clean run to claim victory on the HMC Electrothread Rally, held around the Gauteng town of Bronkhorstspruit on August 17 and 18.

“We had a really fantastic event,” said an ecstatic Botterill after parking his Class R2N Toyota Etios in the parc ferme after the rally. “We won every stage save for Friday’s night stage, and the car ran absolutely faultlessly.”

Botterill/Vacy-Lyle tackled the event, round 5 of the 2018 South African National Rally Championship, with vigour. They won each of the Friday’s opening stages, building up a lead of 26 seconds after just three stages, putting a bit of breathing space between themselves and the second-placed crew of Richard Leeke and Henry Köhne (Class R2N Ford Fiesta).

But then came the night stage, which the Toyota Gazoo Racing SA crew tackled as the seventh car on the road: “This wreaked havoc not only for us, but all the crews except the first car into the stage,” explained Botterill. “The extremely dry and dusty conditions, together with a still, windless evening, made it impossible to drive at any sort of pace.”

Despite the conditions, the Toyota Etios pairing set the second-fastest time on the stage, but lost 50 seconds to Leeke/Köhne, who were the first car on the road – and this unaffected by the dust. This meant that the Toyota Gazoo Racing SA crew ended Day 1 of the HMC Electrothread Rally with a deficit of

23.3 seconds, despite winning all but the last of the four opening stages.

“We knew we were quick during the daylight hours, so we simply had to battle on,” said Botterill.

The pair set about their task with characteristic determination, winning each of the remaining stages and recording a convincing victory in the process. Arch rivals and championship hopefuls Leeke/Köhne fell by the wayside when they had to retire due to technical problems early on Day 2 of the event.

By the time the dust settled over Bronkhorstspruit, it was Botterill/Vacy-Lyle in first place, with AC Potgieter and Nico Swartz (Volkswagen Polo) in second; and Jono van Wyk and Barry White (Ford Fiesta) in third place. Botterill/Vacy-Lyle’s winning margin was two minutes and twelve seconds.

“We have to thank the team for preparing such a bulletproof car for this event,” concluded Botterill. “We never had a hint of trouble, and thanks to this result we now find ourselves with a bit of a gap at the top of the championship standings.”

Round 6 of the 2018 SA NRC follows on 28 and 29 September, and is set to take place in the area around the Mpumalanga town of Secunda. The final round is scheduled for 26 and 27 October, with Ermelo, also in Mpamalanga, supplying the backdrop.