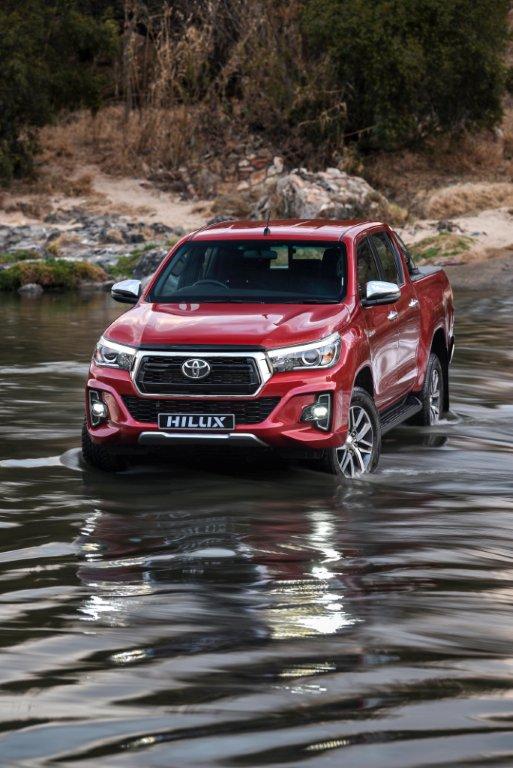 Brian Joss – Following the release of the Dakar Limited Edition – which introduced the SA audience to the bold new ‘square’ face – the Hilux range receives further tweaks to its façade whilst the line-up is also reinforced with a number of additional models catering to both utility and convenience-minded customers.

The standout feature of the refreshed Hilux range is the ‘new face’ across normal Raider and SRX models. The bespoke Dakar derivatives utilised a black-and-grey-themed version of the new Hilux front design – which is carried over to SRX. A slightly different execution has been applied to the Raider grades befitting their flagship status.

In SRX guise the new model adopts a black-themed front design to reinforce the tough, no-nonsense appearance of these mid-tier models. Colour-coded bumpers remain whilst inheriting a matching stylised skid plate on the lower apron. Functional black side steps and side mirrors add a rugged touch.

SRX models continue to offer a practical blend of work and leisure spec:

The responsive 2.4 GD-6 powers SRX-badged ‘bakkies’, delivering 110kW @ 3400 rpm and 400Nm between 1600 and 2000rpm. Six-speed transmissions are utilised in both manual and automatic arrangement.

The multi-dimensional fog lamp garnishes incorporate intersecting horizontal and vertical elements decked out in a matching black – and chromium effect.

The touchscreen multimedia system in Raider guise has been upgraded to include Satellite Navigation and DVD-playback compatibility. Bluetooth telephony, USB interface and 6-speaker output remain part of the package – all controllable via large, steering-mounted switchgear.

A carry-over from the Dakar limited edition is the new full black interior, complete with black headliner and metallic-black interior trim accents.

A number of new utility-focused derivatives have been added to the Hilux range across all three bodystyles – in an effort to best serve its diverse customer base.

The work-focused single cab range has been tweaked to align with customer demand, while also serving business clients optimally. The automatic derivative count has been increased with the introduction of the 2.4 GD-6 ‘Raised Body’ SRX in 6-speed automatic guise. The 2.7 VVTi SRX has been discontinued. The SR-grade – which is aimed at fleet and mining customers offering a full safety kit with a lower convenience spec level – has been expanded with the addition of a 2.4 GD-6 Raised Body Manual variant (previously only available in 4×4 configuration).

In response to great market acceptance of the auto-equipped Xtra cab models introduced in 2017, a mid-grade 2.4 GD-6 SRX ‘Raised Body’ 6-speed auto has been added – bringing the Xtra cab derivative tally to six.

A new grade has been introduced on the Double-cab platform called ‘S’. This entry-level S grade model is a no-frills Hilux aimed at heavy-duty work and foregoes comfort and luxury specification for functionality and durability.

Buyers have the choice of a 2.4 GD-6 with 110kW and 400Nm on tap or 2.7 VVTi petrol engine with outputs of 122kW and 245Nm of torque respectively. GD-6 versions are mated to a 6-speed manual transmission whilst the 2.7 receives a 5-speed cog swapper.

The SR double-cab offerings have been expanded to include a 4×2 ‘Raised Body’ model and also adopt the J-deck layout and black bumper exterior design.

(4×2) variant of the popular 2.4 GD-6 SRX Auto. The previously offered petrol 2.7 VVTi SRX has been discontinued in lieu of the 2.7 VVTi S as highlighted above.

A re-introduction of three Chassis Cab variants is an exciting new development on the Hilux front. They are available in 2.0 VVTi 5MT AC workhorse, 2.4 GD-6 5MT AC workhorse and 2.4 GD-6 6MT SRX 4×4.

The Inferno Orange metallic exterior paint introduced on Dakar has been added to the entire range.