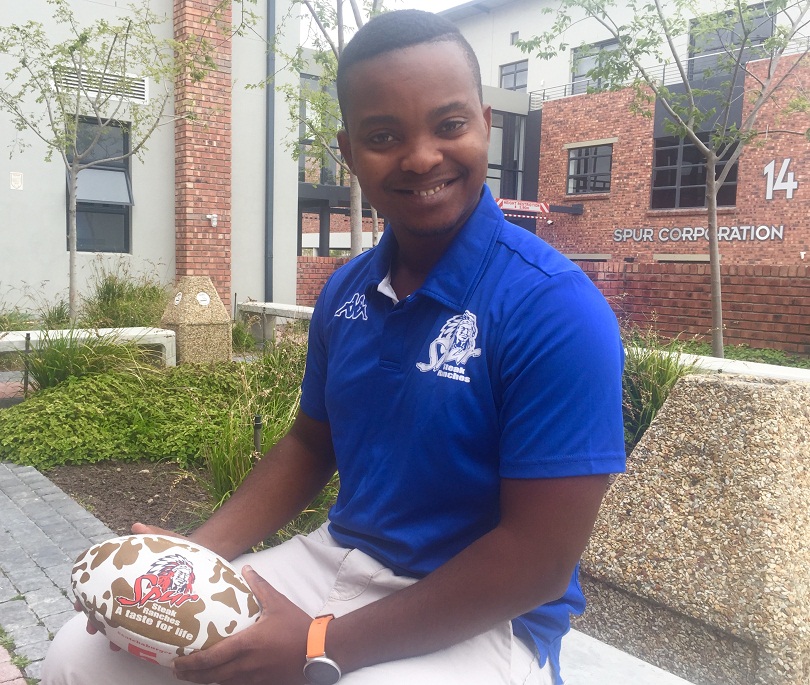 When close to 4 000 primary school boys take to the field on Saturday to participate in the Western Province Mini Rugby Day in Bellville, one of the proudest men next to the rugby field won’t be a dad but the man who makes dozens of similar sporting events happen throughout the country.

The cliché that all heroes don’t wear capes needs a bit of a tweak when it comes to Khakhi Diala (33), Sponsorship and Events Manager for the Spur Group. In his case, it would be more appropriate to say all sporting heroes in South Africa don’t wear green and gold. Affectionately known by kids across the country as ‘Mr Spur’, Khakhi has become a champion of youth participation in sport through dozens of successful initiatives at grassroots level.

With a cheeky grin, Khakhi remembers how he arrived for his interview at Spur dressed in shorts and a rugby jersey five years ago. Back then he was a TAG rugby coach and programme manager at an NPO linked to the South African Rugby Union and he had to rush from the rugby field to be in time for the interview.

It’s Khakhi’s own vivid memory of the positive impact a coach had on him in his childhood, that fuels his passion for creating sporting platforms for kids. “My teachers in primary school were big rugby and cricket fans. One of the cricket coaches took me under his wing and showed me when you do a forward block in cricket, your nose, elbow and knee should be in a straight line.”

Khakhi went on to be the vice-captain and opening batsman of his primary school team that won the Pretoria league. “Coaching is so powerful, kids take the lessons and discipline with them for the rest of their lives,” he says. “It builds character and teaches kids about teamwork. To this day I love teamwork because of sport.”

At Capricorn High School in Polokwane Khakhi fell in love with rugby and soon his quick moves as fullback earned him the nickname “Fleck” – after the former Springbok star Robbie Fleck. His dream of joining the Limpopo Blue Bulls team was thwarted during a Craven week selection process when he and two other boys from his school made it to the final round. “From the three of us, I was the only one that was not chosen. It was probably the biggest disappointment of my life. I realised I’m good, but not that good.”

The upside of his failure to make it to the big league was that Khakhi decided if he wasn’t meant to shine in the front line of rugby, he was going to try to make it big behind the scenes. He went on to study sports management at the Cape Peninsula University of Technology and he completed the BTech degree as one of the top ten of his class. Khakhi has started work on a master’s degree and still hopes to complete his research into transformation in schools rugby and the retention of high-performance players within the school system. “There is a massive pool of talent in our country, but we’re not even using 30% of it. If we can ensure that every child has the opportunity to participate in sport and if we invest to develop talent, we will make our national teams stronger and sort out a lot of our problems.”

Khakhi sees the primary goal of his job at Spur to help children across South Africa discover the joy of taking part in sport. His eyes shine with pride when he lists the names of young achievers that have come through Spur’s programmes in sports such as mountain biking, soccer, cricket and rugby. “Team Spur’s Alan Hatherly is a shining star – he recently won the under-23 UCI Mountain Bike World Cup in Canada. Wandile Makwetu is a product of the Spur Montrose Night Challenge programme and he’s now vice-captain of the SA U/19 cricket team. Anelisa Ndyebi has been selected to the SA U/19 women’s soccer team, she was introduced to soccer through the Spur Masidlale programme and 15-year-old Aphiwe Gumede, also a product of the Masidlale programme, is already playing with the KZN International soccer academy based at Berea Rovers.”

But Khakhi is quick to add Spur’s support for sport is not focused on creating superstars. “Our main mission is to give every boy and girl the opportunity to shine and reach their full potential. For me, there is no better feeling in the world than witnessing the joy and energy of a bunch of kids that come together on a sports field with a shared goal. It’s a positive impact that has a ripple effect for families and whole communities.”

Khakhi has been a driving force to make every sporting event sponsored by Spur memorable and the feedback has been “overwhelming” he says. “When you go to our events you see the value of what we’re investing in. You can’t help but feel good about life when you leave.” Khakhi has been studying American football to get inspiration for engaging audiences. “We’re still a bit behind in South Africa, but we’re quickly catching up. People love Spur’s kiss cams and dance cams, it adds to the fun and ‘wow!’ factor at events.”

As one of South Africa’s favourite family brands, Spur has a responsibility to support families to come together for fun experiences, Khakhi believes. “That’s why I look forward to the Mini Rugby Day so much – it’s amazing to see how families from diverse backgrounds come together and enjoy a shared love of sports. The highlight for the kids is when they meet Currie Cup players. At that age role models are crucial and you know the kids won’t forget the magical moment they meet their heroes.”

Beyond his passion for rugby, Khakhi is currently also involved in an initiative to support more youngsters from disadvantaged communities to get involved in mountain biking. “Our development programme was launched in July and we provide bikes, helmets and kits to young people who are keen to get involved in mountain biking but lack the resources. It’s a long-term project, but we’ve already seen signs that it’s going to be a success.”

As a corporate, the Spur Group has been doing more than most companies to develop sport in South Africa, but Khakhi is keen to do even more. “As corporates, we can only go so far, we also need to get local municipalities on board to reach communities where sporting opportunities are very limited. There should be better communication between local government and corporates so we can work together more effectively.”

Khakhi is keen to share the success Spur has had and to inspire more involvement in sport development. “Once you’ve seen how sport can improve people’s lives and break down barriers, it gives you hope for the future. That is why I love my job so much. I often say I have the best job in the company – at times it doesn’t feel like a job. I love every minute of it.”