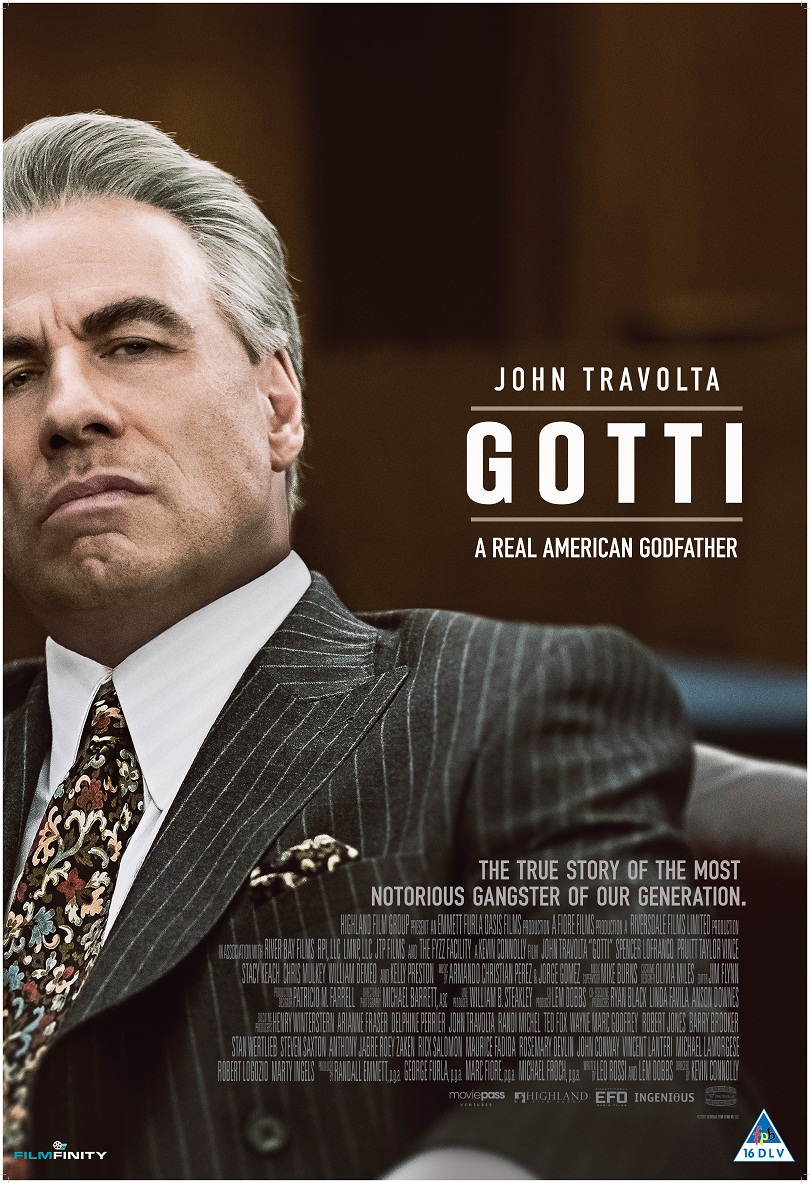 Movies offer audiences the opportunity to identify with people – even notorious criminals – far outside their sphere of everyday experience. And that is exactly what happens in this candid tell-all about the most notorious gangster since Al Capone.

In GOTTI, actor-turned-director Kevin Connolly and writer Leo Rossi (who also stars in the film), tells the story of infamous crime boss John Joseph Gotti’s rise to become the “Teflon Don” of the Gambino Crime Family in New York City. Spanning three decades and recounted by his son, the film examines Gotti’s tumultuous life as he and his wife attempt to hold the family together amongst various tragedies and trials.

Rossi’s screenplay was directly influenced by his conversations with John Gotti himself and attempts to show both sides of Gotti’s life. “The screenplay that I envisioned after talking to Gotti had the Mafia element, of course, but also the situation of the family. To me, to see how a life of crime in the Mafia affects the family was just as compelling as the Mafia life itself. I tried to interweave them,” he explains.

Arching back and forth between the crucial events that shaped his illicit career during the 1970s, and the aftermath of those glory days in the 1990s when illness ravaged his health, the film presents an honest portrait of a man whose path was marked by violence, ambition, and, despite it all, love for his family.

Bringing GOTTI to life on screen is the legendary John Travolta, who says: “The role required a full understanding of Gotti as a person, not only of his actions, but also the things that really mattered to him on a human level.”

Travolta’s involvement in the project goes back several years, and he was one of a few actors who were approved to play this role by the Gotti family. “I was enthralled by the idea that they thought I could do this. This role was a beautiful challenge to take on,” he says.

With an avid mind for strategic planning and to manipulate the pieces of the underworld’s puzzle to his benefit, the film shows how Gotti managed to transform an already successful operation run by the Gambino family into one of the most powerful criminal organizations in American history.

Weaved into the intense and compelling sequence of events that led to his rise to power, is Gotti Jr’s decision to leave a much safer career in the military to join the family business, as well as Gotti’s relationship with devout wife Victoria (Kelly Preston), who held the family together and took her role as mother as seriously as John took his as provider.

Preston wanted to bring the fact that the family was often faced with tragedy and adversity to the screen and, to prepare for her role, she had the unique opportunity to establish a relationship with the real-life Victoria Gotti. As such, Preston was able to construct a candid and complex portrait of a woman who was caught up in difficult situations but never faltered.

While every character represents a new adventure for an actor, Preston admits that lending her talents to portray a real person who is still alive was particularly taxing. “Playing someone who is alive now has its challenges, but in some ways, it’s been a real gift.”

For Connolly, the prospect of being on set with someone of John Travolta’s calibre was a once in a lifetime opportunity, and what first attracted him to the project. With Travolta at the heart of the project, the up-and-coming director felt that he was able to experiment and allow the film to take shape organically. “I have my ideas of how I like to do things, but if an actor, particularly an actor with as strong and as much experience as John Travolta, has a different idea and wants to do this or that, I’m always open to actors making their own choices. I want to let them to explore their choices, and then try to readjust to make them as comfortable as I can,” Connolly adds.

The bond between the Connolly and the actors – including Stacy Keach, Pruitt Taylor Vince and William DeMeo – is clear in the way GOTTI was constructed on the screen and imbues the film with authenticity.

In addition to portraying the life of a notorious gangster, GOTTI ultimately helps you realise that, even for those who have slipped away from the righteous path, family is everything. “It just goes to show, no matter what it is, your father’s your father, and your mother’s your mother, and there are special relationships for everybody. It’s no different with the Gotti’s,” concludes Connolly.

GOTTI is distributed by Filmfinity (Pty) Ltd. and will be released nationwide on 21 September 2018.