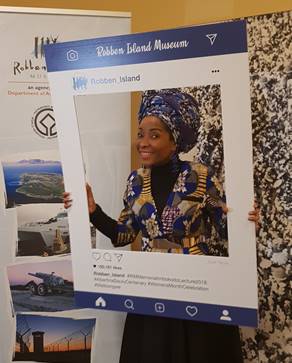 “Of course the struggle is not over, uMama Sisulu and her comrades lead us and they brought us here to head the office.

We need to start a conversation about what it means to have the office as a black woman in this country today. It is not what it seems on TV and in newspapers it is way harder than that,” said Professor Phakeng in opening her keynote address at Robben Island Museum’s Annual Imbokodo Memorial Lecture yesterday at the Table Bay Hotel.

“Robben Island Museum dedicated this ‘Imbokodo Lecture’ to the legacy of uMama Albertina Nontsikelelo Sisulu as well as the extraordinary women whose sacrifices as single parents and activists ensured democracy and freedom in South Africa,” says Morongoa Ramaboa, Spokesperson for Robben Island Museum.

Following an illustrious academic and professional career, Professor Phakeng symbolizes black excellence and the greatest wish of the women who marched for our freedom. She also added that women and non-conforming genders are not heard and often not seen and that is the problem that University academics can address. “As researchers and teachers we can make the space for more women voices to be heard for their own advancement and the advancement of others. To influence government policy and to help us learn how to make room for both transgender and cisgender women’s needs”, continued Professor Phakeng.

The day was marked with talks and presentations, networking opportunities, music and knowledge sharing. The lecture highlighted the issues that affect women: Issues related to women’s empowerment through equal opportunity, affirmative action, access to developmental opportunities, discrimination and femicide, The lecture also celebrated the progress of South African woman in all walks of life like the increase in women in Parliament since 1994 and cemented South Africa’s history with a short film titled ‘Umama’ by Professor Marion Keim. This heart-warming film focused on the role mothers of political activists played in shaping the icons they had become.

”It was an evening of history and an opportunity to bear witness to the many heroines who have elevated women as equal architects in the South African story. Robben Island Museum wishes more South Africans would take a moment to acknowledge the many stories of triumph and hope that make up our collective history and heritage. Let us be a society that embraces intergenerational dialogues for the purpose of heritage preservation,” concluded Ramaboa.