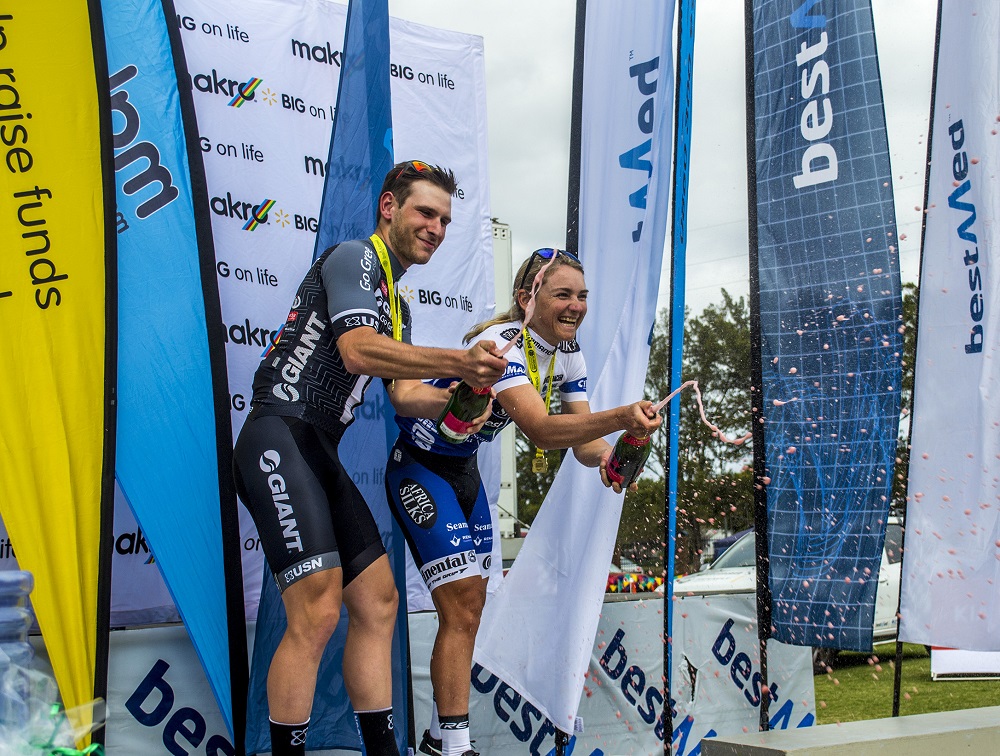 Champions Brad Gouveris and Anriette Schoeman are ready for the challenges of early-season racing when they defend their titles in the Bestmed Makro Championship in Port Elizabeth on Saturday.

Cyclists will have a chance to return to action after the winter months when the feature 106km road race takes place this weekend, followed by the 70km mountain-bike event on September 16.

The road events, which cater for riders of all levels, will start and finish at the Lorraine Primary School, while the mountain-bike races will take place in the Hopewell Conservation Estate at St Albans, just outside Port Elizabeth.

The 20-year-old Gouveris, who rides for the Nelson Mandela University club, won his first Makro title last year and admitted it would be tough trying to repeat that success.

“Obviously I would love to defend the title,” he said. “That is always the goal and it is the reason we race.

“I know that it’s never easy to emulate the success of the previous year, but I am excited about this opportunity and to see how the race unfolds.”

He added that his training was on track, but that you never quite knew the level of your fitness until you competed in the more intense environment of a race.

With sprinting as his strength, Gouveris said he was looking forward to a route which suited his style.

“I’m a light rider and I have a sprint on me,” he said. “I am not a climber, but I can handle going up drags and this is the kind of course which doesn’t have any really long hills.

“It is more of a punchier type of race, with short, steep little drags – which does help my style of riding.”

He added, however, that every race had its own challenges and that he was not expecting an easy race.

“Locally there are some really good competitors. I am not sure who is going to be there, but I will just be focusing on what I can do and adapt to the challenges as they happen.”

Women’s champion Schoeman has been the dominant factor among the females, winning 17 out of 18 titles since the tour’s inception in 2000.

Despite that lengthy string of successes, the 41-year-old PE star said she remained motivated to produce her best each time she raced.

“My cycling career has always been performance-driven and I enjoy winning races,” said the Africa Silks-Bestmed rider.

“To achieve that I am prepared to push myself beyond my limits, knowing that the harder I train, the better I can do.”

She added that she had slightly changed her perspective of racing over the years, with a stronger focus on achieving consistency.

“When there are occasions that I may not be able to win the race, I now want to make sure I get on the podium.

“Having said that, winning is still the ultimate goal when I stand on the start line. I wouldn’t be there if I didn’t think I could win and that is still my motivation after all these years.”

Schoeman added she had a particular affinity with the Makro race as it was an occasion for the women to ride with the elite men’s category.

“Sometimes when it’s just women, you will just watch each other for 80km and then it ends up in a sprint for the line.

“When you ride with the guys, the strongest [women] riders will end up in the front and then fight it out on the line, so that is something I enjoy.”

Besides the feature race, which starts at 7am, the road programme offers a number of options, with additional distances over 55km and 35km. There are also 5km and 10km events for children, plus a 1km kiddies’ dash.

Entries close at midnight on Monday, September 3, and registration will take place at Lorraine Primary School from 4pm to 7pm on Friday.

The mountain-bike programme has additional events over 35km, 20km and 10km. Entries close at midnight on September 10.

CAPTION: Brad Gouveris (left) and Anriette Schoeman will be back to defend their titles in the Bestmed Makro road race when the feature 106km event takes place from Lorraine Primary School in Port Elizabeth on Saturday. Picture: Supplied