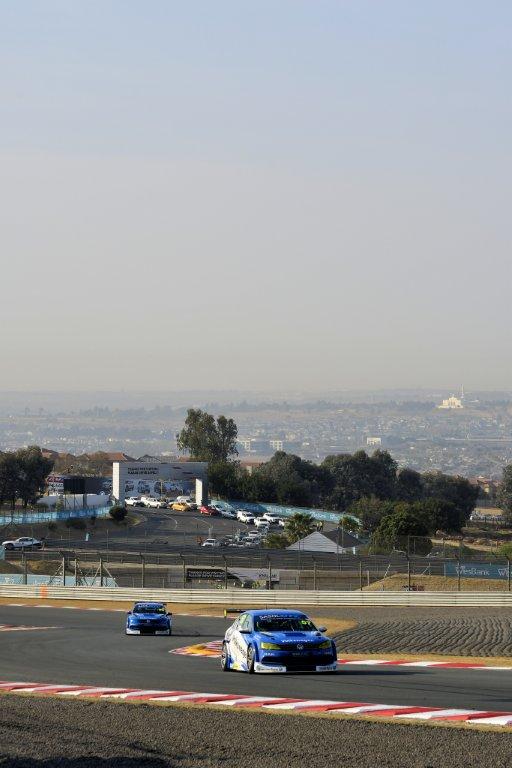 Brian Joss – It was a weekend of mixed fortunes for Volkswagen Motorsport at the Festival of Motoring which hosted round seven of the Sasol GTC Championship.

Daniel Rowe earned his best qualifying position of the year as well as his best race one result this season. Mathew Hodges stood on the podium for the first time this season, while Keagan Masters further extended his lead in the GTC2 Championship after a dominant race one victory in his Volkswagen Advanced Driving Golf GTi; Adrian Wood banked two second place finishes in his Kyocera-backed Volkswagen Golf GTi .

At the other end of the motorsport spectrum, both Rowe and Masters were involved in an accident in the second GTC race on Sunday.

Qualifying saw Rowe claim his best grid position of the season with a solid second place, 0.23 seconds behind Michael Stephen (Audi) and 0.259 seconds ahead of third placed Gennaro Bonafede (BMW). Hodges didn’t string together a perfect lap and lined his #57 Jetta GTC up in seventh place, disappointed that 0.3 seconds was the difference to third on the grid. Volkswagen locked out the front row of the GTC2 grid with championship leader Masters half a second ahead Wood, followed by Charl Smalberger in his privateer VW Golf GTi.

Rowe was immediately in trouble in the early part of the race with a misfire that saw him lose two places on the opening lap. Despite the misfire he passed Simon Moss and closed to within 0.2 seconds of Michael Stephen when the chequered flag came out, claiming second place… Hodges was involved in a furious fight, firstly with Johan Fourie (BMW) and later with Simon Moss (Audi),  slotting in behind Moss in fourth position in the finishing order.

He was later handed a 30-second penalty for using “push to Pass” on lap one which dropped him to seventh on the results sheet.

Masters and Wood drove away from the GTC2 field to record another one-two result for the factory Golf GTi team. As the race ended the final few laps, Wood made several serious overtaking attempts, pulling up Master’s inside line on a couple of occasions, to no avail.

Hodges and Rowe lined up in fifth and seventh places on the reverse order grid on Sunday. As the field raced off on the first lap, Rowe lost rear grip going through the Esses and wound up off the track. As he battled to regain the circuit, his car snapped one way and then the other, ending up in the wall at Turn Ten. Unsighted behind two rivals, Masters hit Rowe’s debris lying on the circuit and was forced to retire. The race was red-flagged to allow for the track to be cleared.

After the re-start, Hodges made his way to third place, which he held to the flag. Wood, from seventh on the grid, quickly climbed up the order, tucking in behind race leader Brad Liebenberg (Mini) as the GTC2 field passed the chequered flag.

Mike Rowe, Volkswagen Motorsport Team Manager said: “The Team can leave Kyalami proud of taking another step forward. The Jetta GTC cars were very competitive and Daniel showed this by planting his car firmly on the front row of the grid for race 1 and then racing well to finish second. The results this weekend are however tough on the team as Race 2 did not go according to plan. Mathew raced well in the second race to be on the podium for the first time this year. Keagan extended his championship lead while Adrian had two very good races. Racing at the Festival of Motoring was a good initiative as it is important for car enthusiasts to be exposed to the sport.”

Volkswagen Motorsport heads to Cape Town’s Killarney Raceway for the penultimate round of the championship on 22 September.