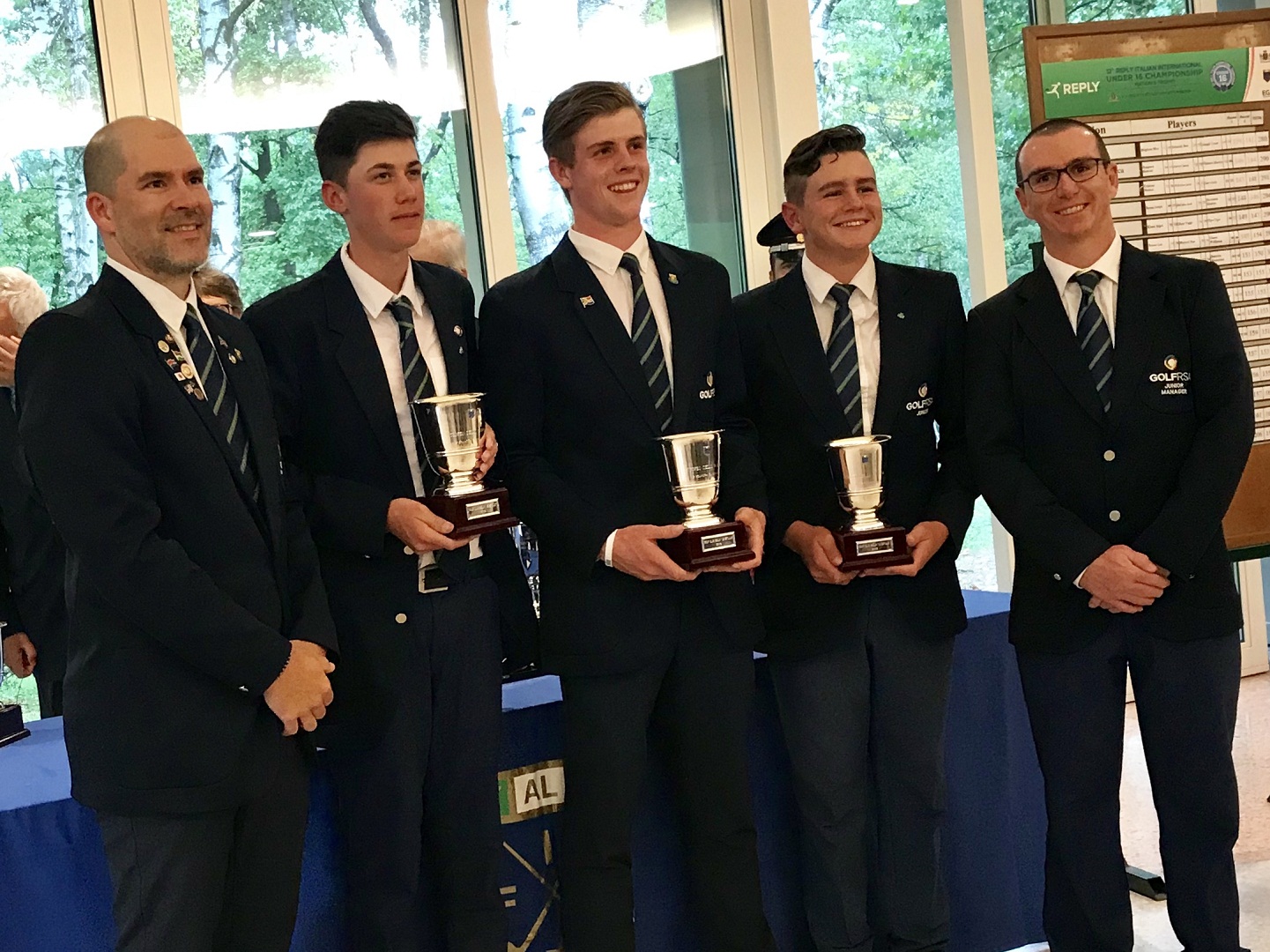 BIELLA, Italy (6 September 2018) – A few of South Africa’s juniors felt hard done by and others felt they left it too late, but the young crew are leaving Italy with great positives after their campaign in Italy was cut short on Thursday.

Torrential rain caused two lengthy suspensions at the start and during the third round of the 12th Reply Italian International Under-16 Championship, forcing organisers to declare a 54-hole result.

Best of the bunch was Sam Simpson from Western Province, who gained a boat load of confidence with a runner-up finish in the junior showpiece loaded with top international players.

Nicolas Fallotico lifted the Teodoro Soldati Trophy in front of a jubilant home crowd at Golf Club Biella le Betulle, carding 70 in the final round to win by two shots on four-under-par 215.

Simpson posted rounds of 74, 69 and 74 to split second place with Max Hopkins and Ben Schmidt from England on two-under.

The 16-year-old reigning Tshwane Junior Open champion also partnered Martin Vorster and Casey Jarvis to second in the Team Competition, which was played concurrent to the first two rounds. The trio carded rounds of 146 and 144 to edge out Italy by one shot on 290, while England won on 290.

“I enjoyed the trip out here with the rest of the guys immensely,” said Simpson.

“The tournament was incredible. Not just the golf; the whole experience was amazing. I played some good golf to put myself in a strong position and it’s a pity we didn’t have one more round. It enjoyed playing the team event with Martin and Casey. Although Kian and Yurav weren’t part of the team, we talked and strategized together as a team.

“The spirit was great and I learned a lot from this experience. I’m really grateful to GolfRSA for this opportunity and I want to thank Uncle Dave (Younge) and Uncle Theo (Bezuidenhout) for looking after us and for their encouragement. I will never forget my first international junior event.”

Vorster from Southern Cape, who captained the team, carded a final round one-under 72 to finish ninth on two-over 221.

“This was the first time I had to defend my title and it was very different to the last two years,” said the 2018 Junior Open champion. “All eyes were on me and I felt the pressure.

“I battled with my irons in the first two rounds, but I was able to claw my way into the top 10 in the third round. The conditions were really challenging, but I was disappointed when they stopped the tournament. I would have loved to try to close the gap.
“Uncle Dave and Uncle Theo were amazing managers and their positive attitude kept us going when things got tough. We are all really grateful to GolfRSA for opportunities like Italy. This is an incredible event and the pay-off for competing here always comes later.”

“It was a pretty rough day and not what we expected when we arrived at the course raring to go,” said GolfRSA Assistant Manager Golf Operations David Younge, who managed the team with GolfRSA National Squad sport psychologist Theo Bezuidenhout.

“The guys were striping it at the driving range and really geared up to start, but the weather turned brutal with cold, sweeping rain. The suspensions were very disruptive. Kian battled at the start, but was holding it together until the first break.

“Martin was four-under through nine when they suspended play and Casey was frustrated because he couldn’t get it going. Yurav was a machine. He got very unlucky with a lost ball just before the second suspension at 16, but still posted a great score.

“Sam had a solid tournament start to finish and really announced himself as a player to watch. He and a lot of other guys were really deflated when they called it at 54 holes.

“Hats off to the tournament director Ricardo, who had a tough job today. There was lots of lightning strikes and rain, but he had his finger on the pulse. He was in constant contact with the weather station and got the players off the course with no incidences.

“Theo and I teamed up and covered the mental and logistic sides of the event nicely and the team was fantastic. They jelled really well with lots of camaraderie, jokes and rooting for each other. They enjoyed the challenging course and the camp was positive.

“Theo and I are very proud of the group of youngsters. People were constantly complimenting us about our juniors. Their conduct, their discipline, their dress code and their behaviour on and off the course was outstanding. We have some amazing future champions in the making and it is a privilege to be part of their development within the GolfRSA family.”