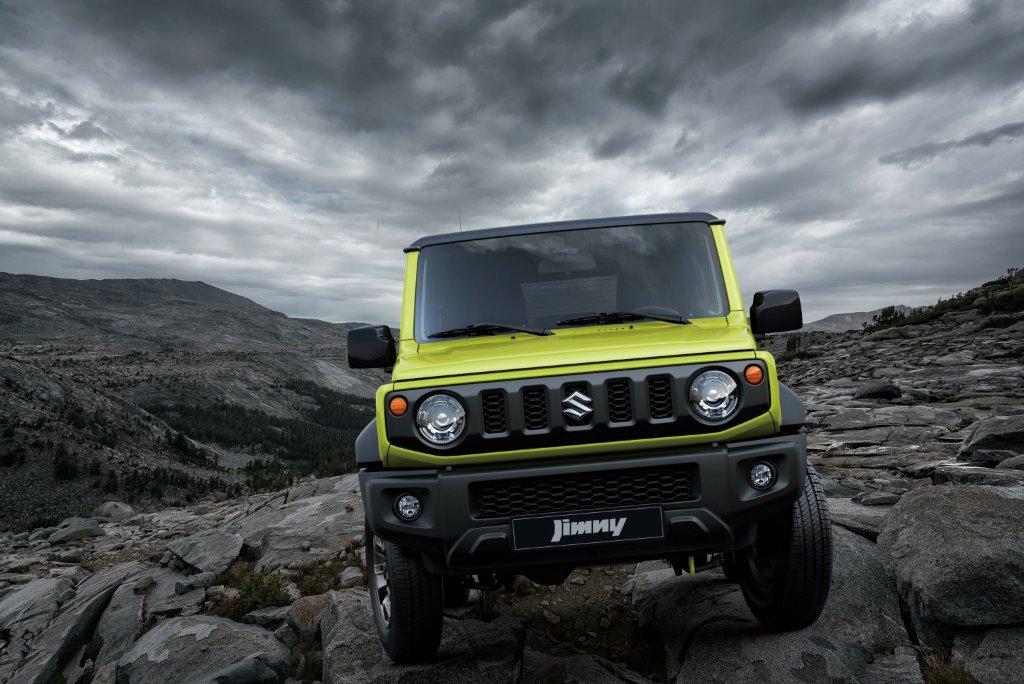 Brian Joss – Suzuki unveiled its new giant killer – the all-ne Jimny -. at the 2018 Johannesburg Festival of Motoring in Johannesburg The Jimny fills the very big shoes of its predecessors, which were responsible for creating a new market segment for compact, affordable, capable and – most importantly – fun, off roaders. It is only the fourth all-new model since the LJ10 was launched in 1970.

New styling elements include an overall angular design that is reminiscent of the first LJ and second generation SJ model ranges; the round headlamps and separate round orange indicators of the LJ10, the first generation; side bonnet slits and an angular front windscreen from the SJ series – the first range to be called Giant Killer by the 4×4 community; and a clamshell bonnet and upright grille like the SJ and previous generation Jimny. It has already been dubbed the Giant Killer by fans.

It is built on a new ladder-frame chassis with a patented “X”member between the two rigid axles for 1.5 times the torsional rigidity of its predecessor.

Both axles remain rigid, a boon in sand and mud driving; and with the addition of new coil springs and shock absorbers the Jimny now has a 210 mm ground clearance, 20 mm more than before.

Under the clamshell bonnet, Suzuki has fitted its modern K15B petrol engine.

This 1.5 litre four cylinder unit replaces the 1.3 litre M13A engine of the previous model and delivers 75 kW at 6 000 rpm and 130 Nm at 4 000 rpm and is 15% lighter than the 1.3 litre unit it replaces. The engine is mated to a five-speed manual gearbox and an optional four-speed automatic gearbox in GLX specification.

All new Jimny models are fitted with a 4×4 system called AllGrip ProR, which allows the driver to comfortably switch between 4×2 (rear-wheel drive), 4×4 high and 4×4 low range with a secondary gear lever. This system is supported by both the vehicle stability control (ESP) and a new Brake-enabled Limited Slip Differential system.

While Suzuki did not want to compromise the compact character of the Jimny lineage, it has improved driver and passenger comfort and added practical storage concepts in response to owner feedback.

The front seats are 55 mm longer than before and have wider seat cushion frames. Interestingly, Suzuki engineers have lowered the seat bolsters to allow comfortable shoulder movement when the driver and front passenger want to look around and behind them, for instance when they navigate a tricky obstacle in the bush.

– to the new GLX-specification. This large touch screen is fitted with Apple Carplay, Android Auto and Mirror Link to accommodate most smartphones’

The rear load bay is a joy for overland enthusiasts. The luggage area on models with split seats is covered in hardy moulded plastic and has several tie-down hooks, a 12V socket (on the GLX) and multiple utility screw holes under the rear windows and in the load bay.

Suzuki has also designed a large removable luggage box that is part of the comprehensive option catalogue, and just behind the rear door sill there is a hidden toolbox that can also be removed.

To widen the appeal of the all-new Jimny, Suzuki South Africa will introduce both a GA and GLX specification level.

Caption: The Jimny from Suzuki: the fourth all new model since 1970. Picture: Motorpressbr