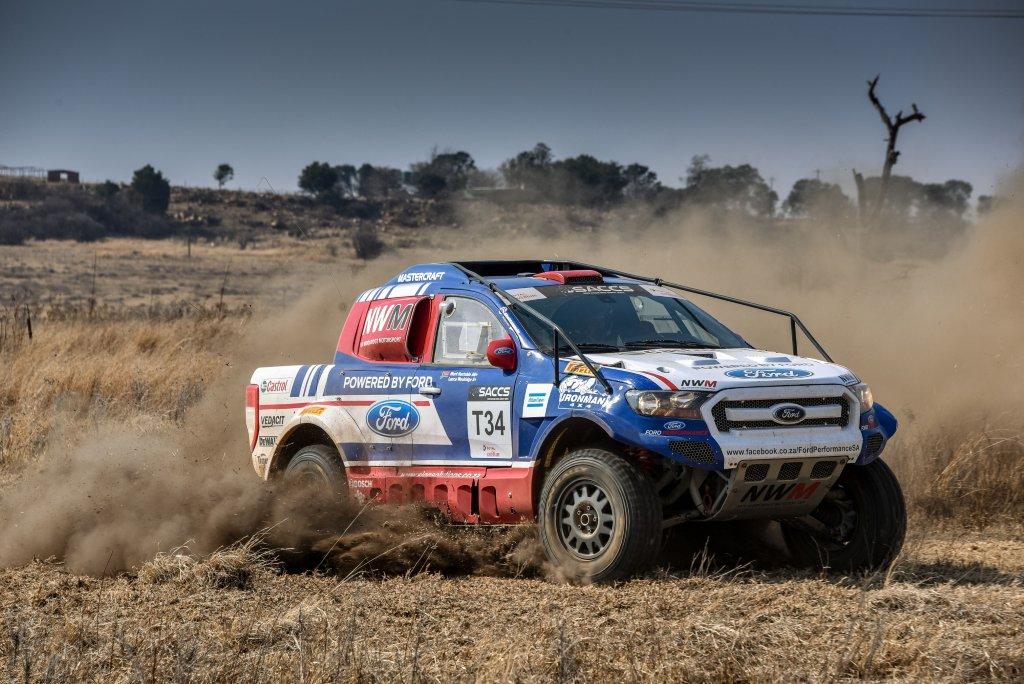 Brian Joss – All eyes will be on the fiercely contested Class T Production Vehicle Championship when the South African Cross Country Series (SACCS) returns to Harrismith for the penultimate race of the 2018 season from today, Friday September 14, and on Saturday September  15.

Having dominated this event last year with an emphatic 1-2 finish, the Ford Neil Woolridge Motorsport (NWM) team is hoping for a repeat performance that will help power current points leaders Lance Woolridge and co-driver Ward Huxtable towards the Class T national title.

“With only two events remaining in this year’s championship, scoring maximum points will be essential in Harrismith,” says Neil Woolridge, NWM team principal. “We had a fantastic result here last year, and have improved our Ford Rangers significantly since then, so we’re hoping that Lance will be able to claim his third overall class win of the season and extend his lead going into the final race.”

Lance’s quest will be aided by his number T34 Ranger being fitted with the latest-specification direct injection 5.0-litre V8 Mustang engine for the first time. It has already been used in the other two NWM Ford Rangers, crewed by Gareth Woolridge and co-driver Boyd Dreyer, along with the visiting Brazilian team of Marcos Baumgart and Kleber Cincea, for the past two races.

“We’ve run the new engines since Botswana and have sorted out the minor technical issues with the installation, so the time is right to give Lance the benefit of the additional power and mid-range torque that this engine offers, which should help him in the varied terrain that is typical of the Harrismith race,” Woolridge Senior adds.

Lance and Ward currently have 105 points compared to the 101 of reigning champions Johan and Werner Horn (Toyota), and the fight for championship glory is expected to go right down to the wire.

Besides preparing the vehicles for the Class T title assault in the South African series, it has been an extremely busy couple of months for the NWM team, including travelling to Brazil to compete in the eight-day 3 600km Rally dos Sertões in partnership with the X Rally Team directly after the Bronkhorstspruit race in August.

“Despite the tough schedule, the entire team is on a high after we not only won Sertões for the third time in a row, but our five Rangers topped the final results and finished this tough race without any mechanical issues. We took the top three places in the FIA T1 category, as well as the top two in the T1-Brazil class that closely resembles our Class T championship, so it’s a great result for our locally built cross country Rangers and gives us great confidence for these last two races of the 2018 season,” he says.

Gareth Woolridge was on the receiving end of his share of the glory at Sertões, winning the T1-Brazil class on his international racing debut. The young Woolridge is currently fourth in the SA championship along with co-driver Boyd Dreyer, and the pair has their sights set on snatching third place from Gary Bertholdt and Geoff Minnitt (Toyota).

The talented duo’s challenge in the number T77 NWM Ford Ranger will be bolstered by their impressive qualifying pace throughout the season, matched to the confidence of having secured their first outright victory at this event last year.

Unfortunately, the third NWM Ford Ranger won’t be competing in Harrismith as the X Rally Team of Marcos Baumgart and Kleber Cincea will be contesting a round of the Brazilian championship which they currently lead.

For the second consecutive year, the Harrismith 400 will be based at the Eeram Farmers Complex on the outskirts of the eastern Free State town.

According to the organisers, more than 80 percent of this year’s route is entirely new and encompasses flowing terrain combined with undulating sandy tracks.

The short qualifying race starts at 13:00 on Friday 14 September, with the main race commencing at 08:00 on Saturday.