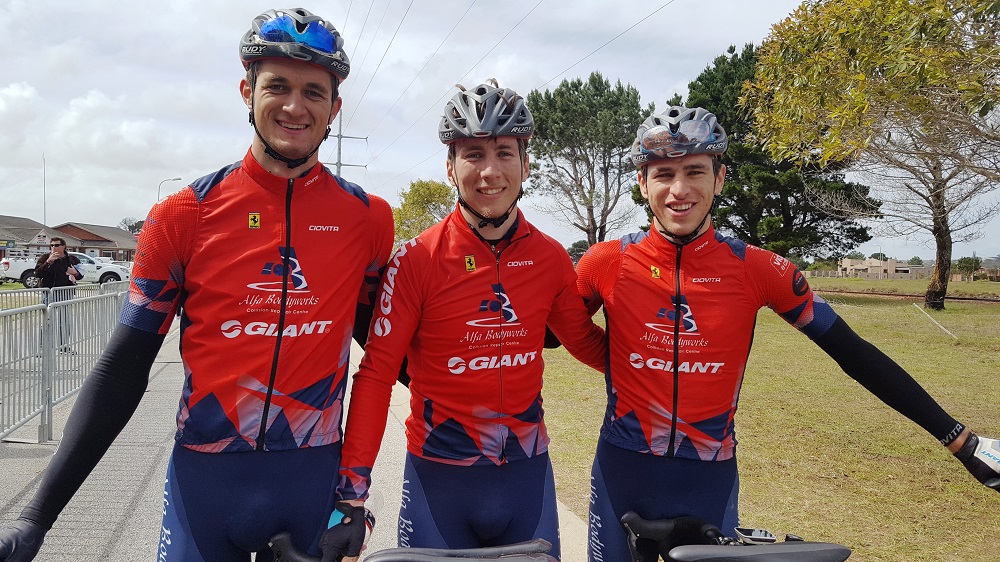 With rain and windy conditions making life difficult for the riders, Du Plooy led the elite category home at Lorraine Primary School in 2:46:04. He crossed the line in a group finish with teammates Bernard Esterhuizen (2:46:07) and Nicol Carstens (2:46:10).

The 23-year-old Du Plooy said the team had enjoyed previous experiences of races in Port Elizabeth and had been unfazed by the weather.

“Races in Port Elizabeth are really well organised, with few traffic hassles, and we thrive in those sorts of situations,” he said.

“We are capable of handling weather conditions such as wind and rain, so we were quite excited about the situation.

“Of course you do need to be careful on slippery roads, but if you work as a team and capitalise on the conditions you can have a really good race.”

The new champion, who lives in Blaauwberg, said their intention was to put pressure on the other teams early on, which was done as Esterhuizen, followed by Jack van Wyk, broke away within the first two kilometres.

“I managed to ride over to them and then Bernard and I got away from Jack and built a reasonable lead.

“Nicol joined us about 80km into the race and we were able to cross the line together.

“I felt our team read the race very well and they were kind enough to give me the victory at the finish. Equally, I would have given it to any of them because it was a really good team effort.

“It’s great to get this win under my belt,” said Du Plooy, who won the GP Perwez one-day road race in Belgium this year.

Defending champion Anriette Schoeman took the women’s elite category for her 18th title in the 19-year history of the event. She finished in a time of 3:18:21.

The Africa Silks-Bestmed rider was happy to rack up another win but acknowledged that it “was a tough day at the office”.

“I lost the leading men early on and I always knew it was going to be a hard day,” said the Port Elizabeth rider. “It’s a tough route to start off with and obviously the conditions made it 10 times worse.

“There was a serious headwind and some heavy rain, and I’m just happy to have finished in one piece.”

The 41-year-old Schoeman said it was the sort of day for which one had to be mentally prepared.

“You sort of just switch off your brain and prepare yourself to grind it out.”

She also acknowledged the race organisers, who made sure the event went off smoothly despite the testing conditions.

“The route markers were really good and the marshals did a fine job in some treacherous weather.”