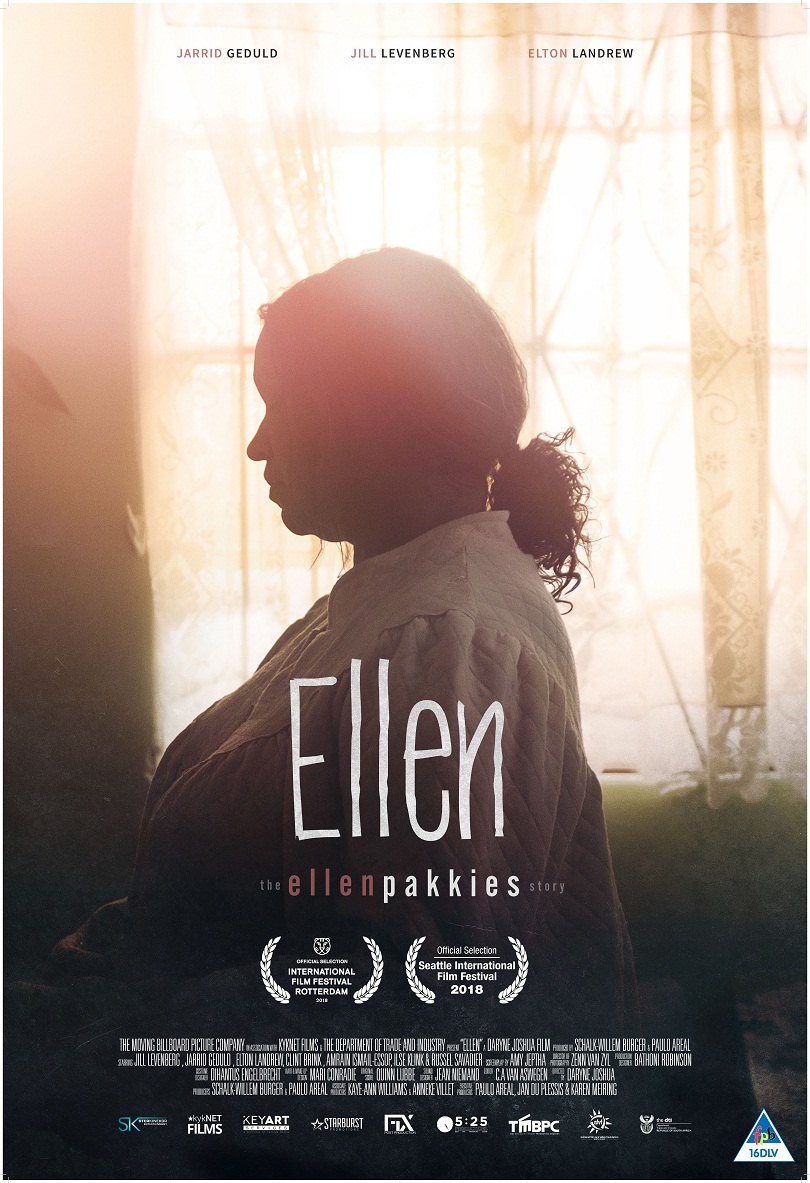 ELLEN, THE ELLEN PAKKIES STORY was officially released in local cinemas on Friday, 7 September 2018 and has received phenomenal support and feedback from the South African public and media!

The creators of the film are extremely grateful for the successful opening weekend of this much anticipated cinematic release.

This award-winning film earned R968 408 during its opening weekend, with the total including all pre-sales. It ranked sixth in terms of the Box Office weekend industry rankings. This means more than 14 808 viewers have already shown their support for this incredible film that won three awards, including Best Script – Amy Jephta; Best Actress – Jill Levenberg and Best Actor – Jarrid Geduld, at this year’s kykNET Silwerskerm Festival.

Critics are also in awe of this film. Leon van Nierop gave it a 10/10-rating and described it as a “life changing experience that needs to be seen”.

“This is a life changing film. Daryne Joshua made a film that can be shown internationally.” – Leon van Nierop
https://maroelamedia.co.za/vermaak/flieks/leon-van-nierop-se-resensie-ellen-die-ellen-pakkies-storie/

“How the Ellen Pakkies Story is told on film is indeed a cinematic masterstroke that keeps one spellbound right from the start.” – Ryan Swano, BruinOu.com
https://www.bruinou.com/aweh/latest-news/item/13012-the-ellen-pakkies-film-a-cinematic-feat-thats-meant-to-change-l

“It’s a real-life story with a message that affects everyone on some level all over world. We truly get to experience the warped relationship between mother and son.” – Graye Morkel, Channel24 (5-stars)
https://www.channel24.co.za/Movies/Reviews/ellen-the-ellen-pakkies-story-20180830

“It’s often easy in a story of this nature to let emotions get in the way of critical appraisal but in this instance, every bit of praise is well deserved.” – Orielle Berry, IOL (4.5-stars)
https://www.iol.co.za/entertainment/movies-theatre/reviews/ellen-the-ellen-pakkies-the-story-a-tragic-tale-of-the-awful-cycle-of-abuse-16901098

“Ellen, Die Storie Van Ellen Pakkies is a Proudly South African movie which once again ably demonstrates the power of storytelling – especially when that story happens to be true.” – Peter Feldman, The Citizen (4-stars)
https://citizen.co.za/lifestyle/your-life-entertainment-your-life/entertainment-movies/2006158/ellen-the-ellen-pakkies-story-review

ELLEN, THE ELLEN PAKKIES STORY was produced under the watchful eye of acclaimed director, Daryne Joshua (Noem My Skollie), in association with producers, Schalk-Willem Burger and Paulo Areal, with input from Ellen Pakkies herself.

The film is already a hit with overseas audiences and was showcased at the Rotterdam International Film Festival, as well as the 44th annual Seattle International Film Festival (SIFF) in the USA. The film delves into the inner psyche of a family ravaged by drugs in one of the most dangerous communities in South Africa. A scourge that extends beyond the Cape Flats and highlights a systematic failure to protect the poorest of the poor.

This motion picture was produced in collaboration with TMBPC (The Moving Billboard Picture Company),  M-Net, kykNET Films and the Department of Trade and Industry (DTI) and is distributed by Filmfinity (Pty) Ltd. It is currently showing at the following cinemas: