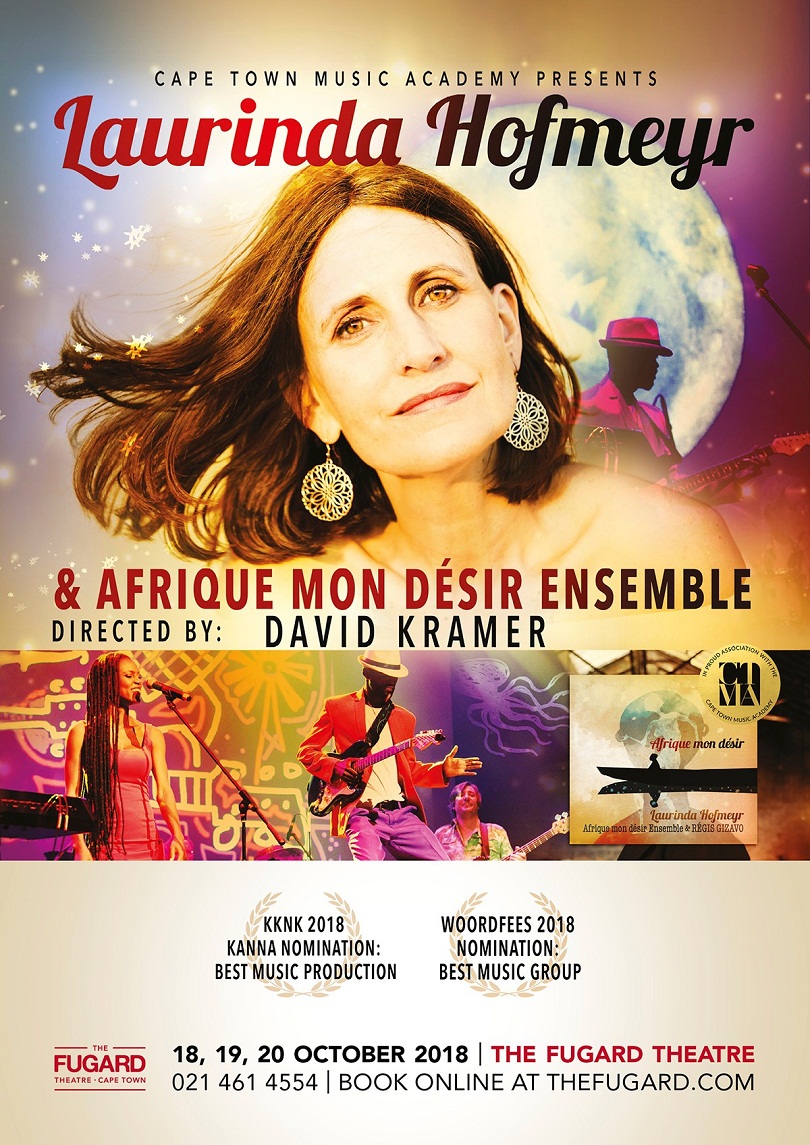 The popular world music production Afrique mon désir, performed by Laurinda Hofmeyr & the Afrique mon désir Ensemble and directed by David Kramer, blew audiences away in Paris, Bordeaux, Poitiers and Angouleme and has now returned home for a three night only run at The Fugard Theatre on 18, 19, 20 October (8pm) with a matinee performance on Saturday 20 October (4pm).

In Afrique mon desir, Hofmeyr – well known for setting poetry to music – together with her ensemble of musicians and singers from Cape Town and West Africa, combine exhilarating rhythms with mesmerising Francophone poetry from as far as Madagascar to Mauritania and Cameroon to Cape Town. They explore haunting themes of displacement and longing and find a deep connection with the continent of Africa. Artist Diek Grobler’s animations brings the music to life and makes this an audio-visual feast.

For director, David Kramer, Afrique mon désir has been a very exciting project. “I enjoyed working with a fusion of Afrikaans and French poetry, performed by talented musicians from Cape Town and the DRC. Bringing Laurinda Hofmeyr’s music to the stage and introducing her to an international audience has been a most satisfying experience.”

Presented by the Cape Town Music Academy*, this world class production debuted earlier in the year at the US Woordfees and Klein Karoo National Arts Festival (KKNK), where it received nominations for Best Music Group and Best Music Production. The show performed to full houses and had audiences and reviewers raving. The album with the same title was then picked up by French music label, In Ouïe and released world-wide in May 2018.

During its tour in France, the production was embraced by the international media – Hofmeyr was invited to be a guest on the international news channel France 24’s prime time Eye on Africa show as well as the Parisian based TV Tele Sud’s Africa Hour show.  Established Bordeaux-based music critic, Bernard Jean, described Afrique mon désir as “the best album and stage production” he has seen in the last decade.

According to Hofmeyr it was an incredible experience to perform in France: “There were many highlights, but playing to a full house on opening night in the Paris theatre district at the world renowned New Mornings Theater where Miles Davis, Bob Dylan, Papa Wemba and Hugh Masekela all had their moment, was the most special event of the tour. We are very excited to now bring this production back home to The Fugard.”

There is secure parking diagonally opposite the theatre.

*The Cape Town Music Academy (CTMA) is a not for profit company (NPC) that seeks to create opportunities for local, established and emerging musicians and related artists in the Western Cape. The objective of the CTMA is to conduct a public benefit activity which creates programmes and projects for the promotion of the work of local musicians, and the development of career opportunities in the South African music industry.