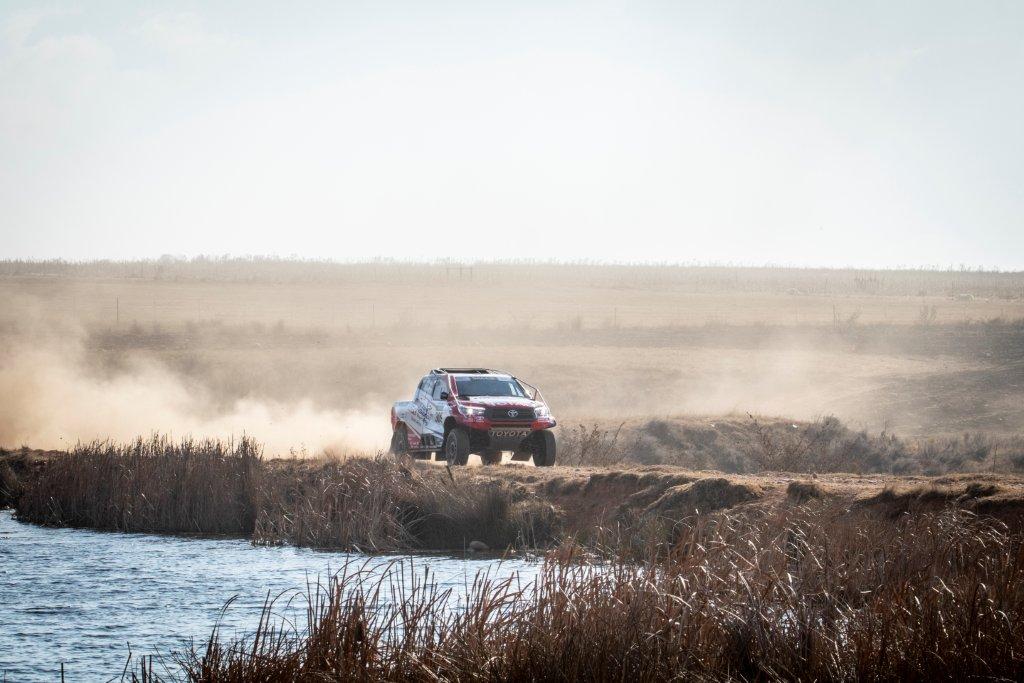 Brian Joss – Round 5 of the 2018 South African Cross-Country Series (SACCS), the Harrismith 400, takes place around the Free State town of Harrismith today, Friday September 14. and Saturday September 15, and for Toyota Gazoo Racing SA it offers an opportunity to cement its standing at the top of the championship table.

Giniel de Villiers, partnered with Dennis Murphy, currently leads the Production Category standings by 33 points over teammate Henk Lategan, who races with Barry White beside him in the Class FIA Toyota Hilux.

“Giniel is still in the lead at the moment, and if all goes to plan he should be able to bring the championship home,” says Toyota Gazoo Racing SA team Principal, Glyn Hall. “But Henk and Barry are fresh off a victory at he previous round, and will certainly be pushing hard to keep Giniel and Dennis honest.”

With 30 points on offer for a win, the battle between the two Toyota Gazoo Racing SA crews is certainly one to watch, and even a minor slip by De Villiers/Murphy could close the gap considerably before the final round of the 2018 series.

Both Class FIA Toyota Hilux race cars have already been prepared for the Rally of Morocco, which takes place from 3-8 October, 2018. As such they feature numerous upgrades including tweaks to the engine, transmission and suspension.

“As much as we need to win in Harrismith, we also need to look after the cars, as they will be shipped to Morocco directly after the race,” continues Hall.

In the Class FIA championship, it is an all-Toyota podium as things stand at present. The two Toyota Gazoo Racing SA crews lead the charge, with Chris Visser and Philip Herselman (Atlas Copco Toyota Hilux) in third place, 34 points behind Lategan/White.

The battle for Class T supremacy is set to continue at the Harrismith 400, as defending Class T champions, Johaan and Werner Horn (Malalane Toyota

Hilux) fight to regain the lead in this season’s standings. The pair are currently just four points behind log leaders Lance Woolridge and Ward Huxtable (Ford Ranger), and with only two races to go, the Toyota lads will be going all-out for victory in the Free State.

With that said, Gary Bertholdt and Geoff Minitt, in the Atlas Copco Toyota Hilux are not out of the Class T title fight either, and find themselves just ten points behind the Horn brothers, thanks to victory on the Atlas Copco 400 in Bronkhorstspruit last month.

Class S will see Archie Rutherford and son Kent back in action in their Toyota Hilux, with 4×4 Mega World’s Heinie Strumpher and Henri Hugo also joining the fray in their Toyota Hilux. Strumpher is currently in third place in the championship, 19 points behind Class S leader David Huddy (Nissan Navara), but a good performance in Harrismith could put him right back in the title fight.

The Harrismith 400 gets under way at 1pm today,  Friday, 14 September, with the qualifying race to determine the start positions for the main event.

This short, sharp race takes place over only 40 km, but may play a pivotal role in the outcome of the main event, which starts at 8am from the Earam Farmer’s Market Complex, on the Johannesburg side of Harrismith.

Follow the fortunes of Toyota Gazoo Racing SA on www.toyota.co.za