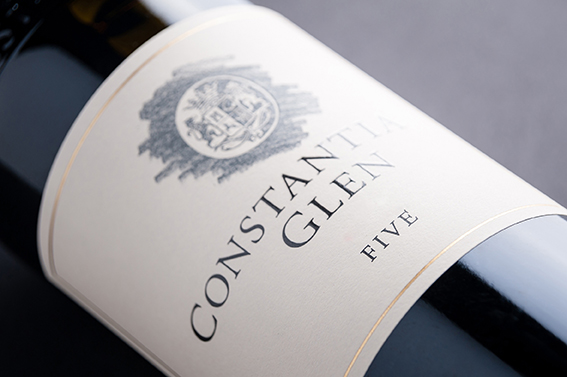 The much anticipated 2014 Constantia Glen FIVE has triumphed on the world stage with rave reviews from leading international wine commentators scoring the wine with a slew of 90+ points.

Just released, the 2014 vintage of Constantia Glen’s flagship red has cracked the nod with 92/100 from Neal Martin and Tim Atkin MW, both highly respected international experts on South African wines. Another British Master of Wine, Derek Smedley, hailed this Bordeaux-style red blend with a staggering 95 points.

Neal Martin of Vinous.com, one of the most influential international online wine publications, praised Constantia Glen as “one place in South Africa that can grow Bordeaux varieties well,” singling out the 2014 FIVE as “a great success” and a fine example of “how to make a Bordeaux-blend”.

British Master of Wine Tim Atkin applauded the 2014 vintage in his 2018 South African Special Report with 92 points. He describes the tannins as “very refined” and “the acidity refreshing”.

For Derek Smedley MW this Bordeaux-style blend stands out as “supple, velvet smooth” while “the underpinning tannins are fine and integrated.”

Stemming from the upper reaches of the Constantiaberg, this graceful expression of the five classic Bordeaux varieties was shaped by the unique location of the vineyards just below Constantia Nek.  The wine owes its elegance and finesse to the exceptionally cool 2014 growing season where cold temperatures ensured the slow accumulation of sugars in the grapes and optimal phenolic ripeness at the time of picking.

The 2014 vintage with its concentrated aromas of ripe blackcurrant, bilberry and juicy plums is a meticulous blend of 28% Cabernet Sauvignon, 25% Cabernet Franc, 21% Merlot, 14% Malbec and 12% Petit Verdot matured for 18 months in 75% new and 25% second-fill French oak barrels.

“I really enjoy the combination of black fruit and savoury characters in the Constantia Glen FIVE 2014 – a result of the very cool vintage. The long ripening time resulted in good concentration and fine-grain tannins giving the wine delicious texture with lots of blackberry fruit persistent through to the finish. It has a wonderful lingering freshness and coolness about it,” says Winemaker Justin van Wyk.

The Constantia Glen FIVE 2014 is available directly from the estate, as well as fine dining restaurants and boutique wine shops. It sells at a cellar door price of R390 per bottle.

Known for exceptional cool climate Bordeaux-style red and white wines, Constantia Glen’s dryland vineyards are farmed without any irrigation. The tasting room is open from 10h00 till 17h00 from Sunday to Friday and 10h00 till 20h00 on Saturdays. Booking via http://www.constantiaglen.com is highly recommended to avoid disappointment. Look out for the Constantia Glen signs towards the top of Constantia Main Road. Call 021-7955639, e-mail reservations@constantiaglen.com, visit www.constantiaglen.com, www.facebook.com/ConstantiaGlen or follow @ConstantiaGlen on Twitter and Instagram. The GPS co-ordinates are S 34º 0’39.6” E 18º 24’30.6”.