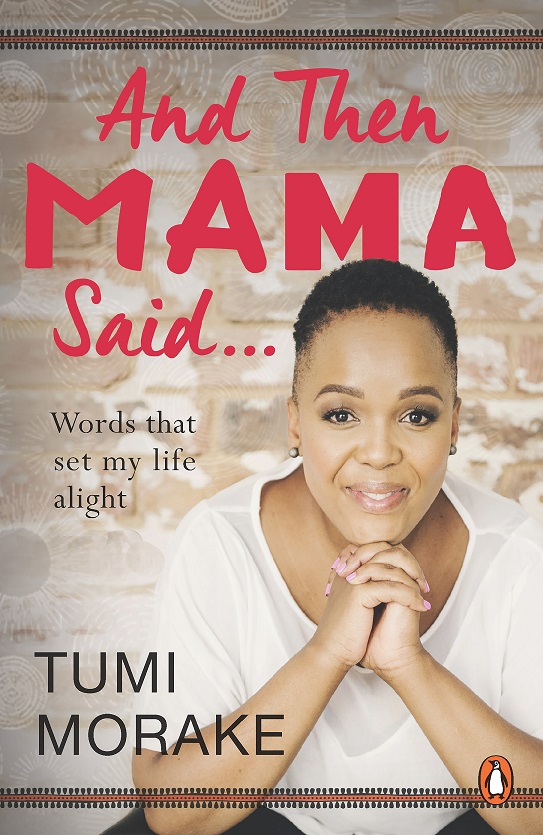 Johannesburg (12 September 2018) – Tumi Morake modelled her public persona on her mother – a charming and contentious woman who used her big, bold voice to say what others were afraid to utter.

It’s the personality that Tumi took on stage in the mostly male space of stand-up comedy, and the one that gave her the courage to comment about apartheid on air.

But there’s only so much you can find out about Tumi from the stage, the screen and the internet… Tumi Morake is proud to announce the release of And Then Mama Said, her highly anticipated debut book, which will be on the shelves from the first week of October. The book is the voice of Tumi in private, as well as a behind-the-scenes perspective of a pioneering South African star who has been deeply loved and viciously hated by her audiences.

Tumi gets frank about the race row at Jacaranda FM; the Jaguar car accident that cyber bullies said she deserved; the body-shaming she endured on the set of Our Perfect Wedding; and her tumultuous relationship with her beloved husband.

Throughout her story, she carries the voice of her mother, and with it the indispensable life lessons that made her who she is today.

The book is a must-read for fans of Tumi Morake; a look behind the scenes of the entertainment industry and its scandals; an inspiring read of her rise from humble beginnings to fame and fortune and a sneak into issues of racism and cyberbullying.

And Then Mama Said is the real, unfiltered story of Tumi Morake.  The book is now available for pre-sale on various online platforms.  Visit www.penguinrandomhouse.co.za for links.

Tumi Morake is an award-winning South African stand-up comedienne, television host and actress.  She also wears the hats of TV producer and writer; wife and mother of 3.  Morake cut her teeth as a writer on SABC’s flagship sitcoms and broke into television acting through those channels.  She is dubbed as one of South Africa’s queens of comedy, headlining on local and international stages.  Morake has dabbled in radio and remains one of South Africa’s most sought-after acts.  She also sits on the board of directors at Summat Training Institute and St. Aquinas College.