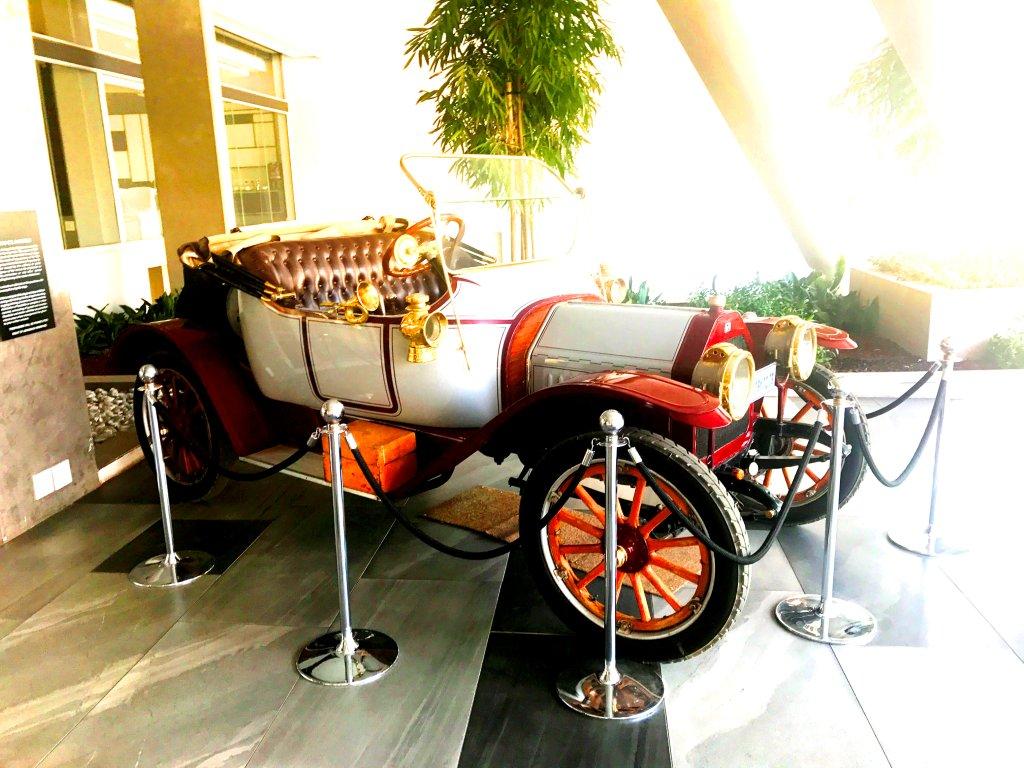 Brian Joss – “Integrity is the most important single aspect of buying a classic car,” said Brian Bruce, a qualified civil engineer and custodian of one of the major classic car collections in the Southern Cape.

Bruce was speaking at the recent HAGI VCCM Conference at The Capital On The Park hotel in Sandton, Bruce was a keynote speaker at this second annual event, which drew classic car collectors from all around the country.

“Classic or vintage cars can generally be described as artefacts, rare objects from the past that are hand-made. And in the acquisition of these artefacts, the process we follow needs to be rigorous.”

As an example of the type of (automotive) integrity he is after, Bruce cites the case of one of his favourite cars, a 1934 Jensen Ford prototype, one of three ever produced, and one of only two that exist today.

“This car has total integrity. Everything about the car is correct. It came with all its original correspondence, invoices, documentation, and even advertising material from 1935, when the production Jensen Ford was produced.

“The car was bought by a man for his 18-year-old daughter, and since then it passed through three generations of daughters of the same family. The last custodian passed it on to her uncle, and when maintenance of the car became a problem, he contacted a mechanic who had last worked on the car in 1966.

This man was an acquaintance of mine, which was how I ended up travelling to Hoedspruit to acquire the car, after an equitable deal was made.”

“This car for me defines the concept of integrity, as regards to old motor cars. It is not in concours condition, but it is mechanically exceptional and original. Once a car has been modified, you cannot re-install integrity back into a car.”

Bruce also cited examples of restorations that he and his young team in Knysna have undertaken, operating out of the old Mitchells Brewery that he purchased specifically to house his burgeoning classic car collection.

He explained that he was always leery of buying a car that was purportedly “restored”, revealing that two close associates had extensive restorations on their classic British sports cars undertaken, and were then forced to have all the work redone, after the initial poor restorations was in excess of R1-million.

Bruce refers to the oft-repeated saying in classic car circles “that we are mere custodians of these artefacts.” But he pointed out that in a changing world, enthusiasts would have to accept that certain classics would inevitably be modified and updated with modern mechanical elements.

“This  process is known as repurposing, and it is gaining increasing popularity in countries like America. It enables younger people to drive a classic with all the design beauty of the original, but with the reliability of a modern car.”

The focus of the conference was accented on the economic benefits of owning a classic car as a valuable, fast-appreciating asset. Organiser Tommy Roes, however, emphasises a key focus of VCCM is value, and value drivers in the local context, which is a much broader conversation.

“Delegates are bound by their love for old and collectable cars that goes far beyond mere monetary value.

“We try to create a balance by addressing various aspects that influence value in a South African setting. Restoration, maintenance, storage, insurance, import/export and related subjects all play a major role in the financial aspect which cannot be ignored” says Roes.

Classic Car Africa editor and publisher Stuart Grant revealed that his monthly enthusiast publication tended to focus more on the human interest side of the classic car field. And he also imparted some interesting facts regarding the most popular editions of his magazine.

“Interestingly,” said Grant “despite the fact that we have had cover pictures ranging from American muscle cars to exotica like Dinos and Lamborghinis and Ferraris, the best-selling magazine to date featured a humble 1970 Renault Gordini, and attracted no less than 46 letters from readers, a record for a cover story.”

Grant also opined that social media has played a big role in certain modest classic cars appreciating massively in a short space of time, citing examples of VW Kombis, Alfa GT Juniors and VW Beetles that have been the subject of massive social media exposure and corresponding huge price rises in the past three years.

On the subject of realising big percentage gains on classic cars as investments, insurance mogul and classic car collector and race driver Paolo Cavalieri made an interesting case for classic racing cars as one of the best investments. Cavalieri’s credentials in the world of finance and motor racing are unimpeachable, having headed up Hollard insurance company through its intense growth phase, as well as having been involved in motor racing as a top driver for four decades. As befitting his Italian heritage, he is also a self-avowed “Ferrari nut” and has an extensive association with the Ferrari marque in this country, as well as in Italy.

“If you look at the highest values realised internationally at recent auctions, some 50 per cent of them are racing cars,” said Cavalieri. “And the highest values were in fact returned by racing cars. So my question to delegates here today is this: why not consider a racing car as your next classic car investment?”

He noted that a racing German-built Zakspeed Ford Escort which won the Kyalami 1000 km race in the mid-1970s, a replica of which was recently built in South Africa by the Piazza-Musso family, and made its debut at the recent Goodwood Festival of Speed.

Expanding on the subject of race replicas, Cavalieri, about a decade ago, embarked on a racing classic project that involved turning an existing collectable car into a race replica of a similar model, as produced by the factory in rare numbers a number of decades ago. Cavalieri set about the project with typical thoroughness, investigating its viability with both a local and a European perspective, and assessing its financial implications, not wishing to over-capitalise on the project.

“It is fundamentally important to choose people with a good name in the business, because a car retains credibility when it was re-built or converted by a respected firm. The same obviously goes for both the mechanicals and the body work.

Cavalieri said he was 50 years-old when he started the project, and that he is now 60 years-old and the car is only now nearing completion. But he says, the whole journey has been worth it, and he plans to compete in both Europe and in South Africa with the car, in selected events.

Gordon Massie is the Managing Director of ITOO Artinsure, a company that specialises in insuring all manner of collectables. Passionate about vintage photography and a keen collector of many categories, Scottish-born Massie has been in South Africa for the past 12 years servicing the local collector community and businesses.

A key theme of his address was the subject of “synaesthesia” – the almost intangible sensory attraction of collectable assets – and how this should be addressed when it comes to insuring such assets. And, also, how the insurer should address such issues, as well as the appreciating nature of rare, collectable motorcars.

Bruce, Cavalieri, Massie and Grant were just four of a range of experts that spoke at the one-and-a-half-day conference. Others included Arthur Kamp of Sanlam on “A New World Economic Order”; Leon Strümpher of Sanlam Private Wealth on “Traditional Worldwide Asset Classes vs Rare and Collectable Cars”; Andrew Shirley of Knight Frank on “Investments of Passion and Global Wealth Trends”;  Johan Marais of Porsche Classic on “Maintaining the Value of your Classic Car”; Neil Paterson of Whiskey Brother on “Whiskey Investing 101”; Ferrari club stalwart Greg Marucchi on “Concours South Africa”; Brian Noik of oldcars.co.za on “When Classic Cars Turn to Tears”; Bryan Webb of Crossley & Webb on  “Restoring Classics”; Stanley Brown of Sanlam Private Wealth on “Collectable Items –Consider the Tax Implications”; James Xulu of Transglobal on “Importing Classics” and Arisha Maharaj of Strauss & Co on “Collecting, Valuing and Auctioning in a South African Art Market.”

A pictorial journey through South African Motor Racing History was also presented by Malcolm Sampson, a renowned photographer who covered moto racing for The Star and Rand Daily Mail in the 1970s and 1980s.

* This is the second HAGI Value in the Classic Car Market conference. The first was held at Sun City last year.

“We set out to demonstrate the incredible felt strongly about expanding on the discussions held in 2017 and have included topics which were evidently missing from our inaugural conference.”

Dietrich Hatlapa, Founder of Historic Automobile Group International (HAGI), who could not attend this year’s conference due to European commitments, stressed that “the knowledgeable collector is firmly in the driving seat.

Value drivers and historic development make a difference and are a focus of classic car owners and enthusiasts.”

The third HAGI VCCM Conference South Africa is scheduled to take place in the first half of 2019.