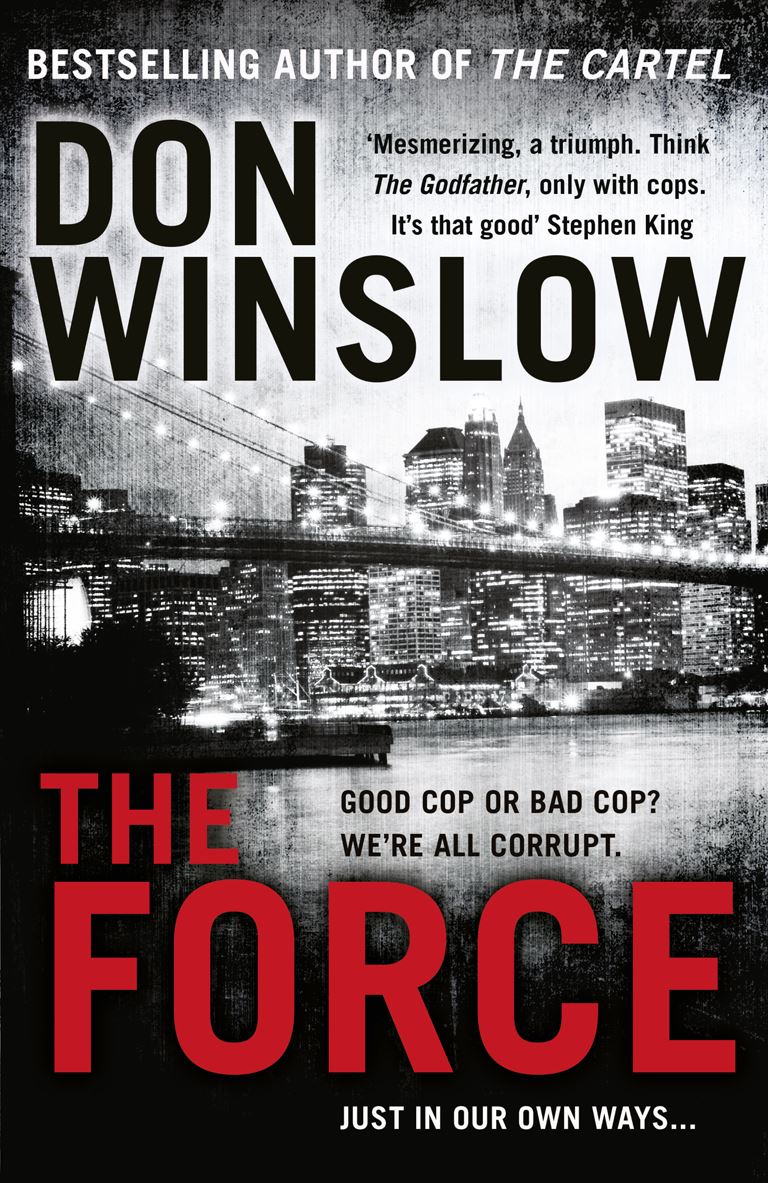 Don Winslow is one of the world’s best crime writers. Many of his books have focused on the Mexican drug trade and include The Cartel; Savages; The Power of The Dog; the Kings of Cool as well as Satori, a rewrite of the classic Shibumi by Trevanian, the nom de plume of Rodney Whitaker, an American academic and featuring the assassin Nicholaï Hel.

In The Force Winslow puts the New York City cops under his magnifying glass, specifically Detective Sergeant Denny Malone and his hand-picked “family” Phil Russo, his childhood friend; Bill Montague and Billy O’Neill, which make up the Manhattan North Special Task Force and they rule their domain like kings. Known as “Da Force” they’ve earned the respect of their colleagues and the criminals fear them. Their unofficial slogan is “May Da Force Be With You”. Malone was responsible for one of the biggest drug raids in New York City: it would have been the biggest if he and his crew hadn’t kept half the cash, as their retirement fund, and the brick-loads of “Dark Horse” heroin worth a fortune they were planning to sell when the time was right. To complicate matters Malone shoots the Dominican kingpin, Diego Pena, twice through the heart. During the raid Billy O’ Neill is also killed but his pregnant girlfriend will be taken care of through the retirement fund. Some of which will go to the kid’s college fund.

Malone and his team are not the only ones on the take; some of the high ranking police officials  and district attorneys are on some crook’s payroll. Even Malone’s rabbi, Inspector Bill McGivern, is not as pure as the driven snow. And it’s Malone who often passes on the envelope.  A select few suspect that Malone is dirty but then it’s normal in city where the cops, gangsters, Mafia and drug dealers are dividing up the turf.

After O’Neill’s death Dave Levin is seconded to the unit but the big question is can he be trusted or is a spy.

Malone who is separated from his wife Sheila is having an affair with a nurse, Claudette, an African-American beauty who is a recovering addict.

Meanwhile after the Pena bust another “Domo” DeVon Carter is moving in to the territory and he is buying weapons from a group of white supremacists which will turn the area into a slaughterhouse. Malone’s commander, Captain Sykes orders him to get Carter.

Denny Malone becomes a rat after the Feds force him to make a tape recording of one of the more corrupt cops, Rafe Torres, making a deal. To say more would be a spoiler.

Winslow has a unique turn of phrase and with his trademark style of short, pithy sentences he will put you at the centre of the action. His characters are living, breathing human beings and even the worst of them like Nasty, one of Malone’s confidential informants, have some redeeming qualities. The Force is a gritty, fast paced novel that will have you hooked from page 1 where we get a glimpse of Denny Malone, hero cop, son of a hero cop and a veteran sergeant in the NYPD’s most elite unit, sitting behind bars at the Metropolitan Correctional Centre. With the people wondering what’s going to happen to them when the Feds put the squeeze on Malone. He could bring the whole edifice crumbling down. The Force is a “Tour Da Force”.