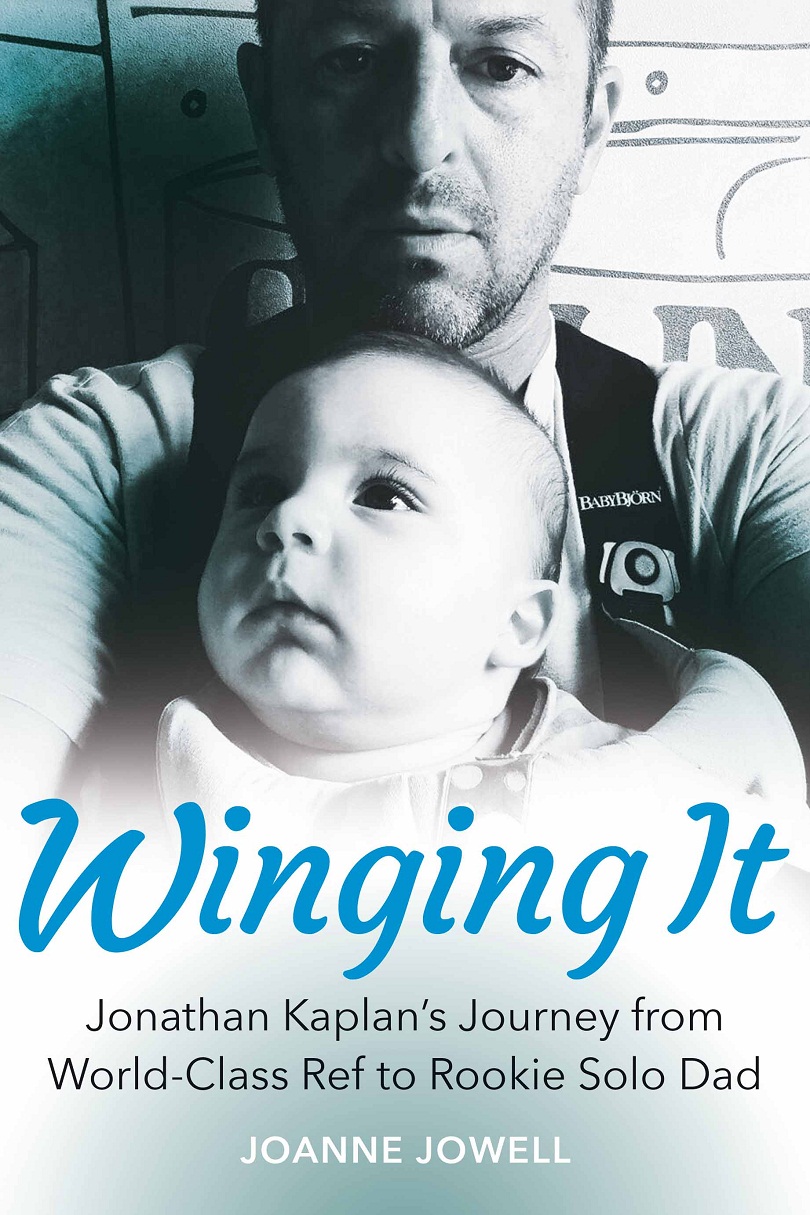 It takes a whistle, a firm hand and sometimes a few stern words to keep 30 men in line on a field. But parenting is a much more “dangerous” occupation than refereeing a rugby match. So it was a surprise when about two years ago I saw a picture in a Jewish newspaper of the record-breaking international rugby referee, Jonathan Kaplan, holding his son, Kaleb,  at a religious ceremony to celebrate the boy’s circumcision.

Kaplan who held the world record for the most test caps and has had many challenging moments on the field, is facing his biggest challenge yet. That of a single dad. With a difference. Strictly speaking there is no mother. But at the age of 47 when he hung up his whistle he made a decision to become a solo parent, using an egg donor and a surrogate.  According to Winging It, Kaplan is single-minded and at the age of 50 became a single dad to fulfil a long-held dream. Up until then his life was focused on rugby, running, bulldogs and bonsais (he grows them and has an extensive collection).

In the book, subtitled, Jonathan Kaplan’s journey from world-class ref to rookie solo dad, writer Joanne Jowell unpacks his story in a straight forward and often brutally honest way. But sensitively too.

One day Kaleb will probably read it as well, and I bet he’ll have a good laugh at the picture showing him clapping himself over the finish line of the Two Oceans Nappy Dash at the age of 10 months when he was the youngest competitor.

Jowell interviewed many people who were involved in Kaplan’s journey to solo parenthood but not everyone was happy with the path he chose.

Kaplan is open about his own feelings of inadequacy and insecurities of being a solo dad, but whenever problems crop up he’ll “wing it.” As a child of divorced parents, Kaplan, who grew up in Durban, says, ” I do feel that what truly matters for children is not who does the loving, but that it is done, honestly and unconditionally.” Which was his guiding principle. It was not that easy, and, at the beginning, he found it difficult to bond with Kaleb. He did have help: his mother, Tikvah, who despite her misgivings is a doting grandmother; Kaplan hired a night nurse, Estelle, and with Zonke, the nanny, were a big help. Friends also pitched in. Even though he is a parent he keeps to his own routine: he doesn’t often forego his daily run or his early morning coffee with friends in Sea Point, where he lives. When he wants to escape he has no hesitation in leaving someone else in charge of his charge.  “It wasn’t so much about the loss of freedom as it was about the loss of being spontaneous, no more, I feel like doing this, and I can.”

He does have his detractors about the way he is bringing up Kaleb.  “I’m happy to be unpopular. If it means I’m being ‘real’, being true to my core values and then living them, acting on them.”

The process of IVF, egg donation and surrogacy are put under the microscope. It was a hard road: there were a lot of disappointments and failures: miscarriages, a near-fatal ectopic pregnancy and low egg counts.

One issue that did arise was Kaplan’s Jewishness. He is a secular Orthodox Jew and he always references his heritage.  It’s a conundrum for Kaplan who wants to bring Kaleb up as a  Jew and he finally decides to join the Progressive Jewish community after seriously considering the alternatives. Rabbi Greg Alexander was the catalyst and you can read about it in the chapter, Yip, Snip and Dip.

The interviews with the surrogate mother, Jacqui, are revealing and give a great deal of insight in why women get involved in surrogacy and what her husband had to say. Kim who has been involved in surrogacy for many years has first-hand experience and was a guiding light for Kaplan during the process.

I also found it intriguing that Kaplan is interested in astrology and that he consulted a numerologist when he was considering a name for his son.

The one question that most people ask, is Kaplan gay? Well he’s not. “But people do have their suspicions because I’ve never married. I grew up in a home where my mom was in fashion, there were always gay guys around and … I think gay guys like the fact that I am comfortable in their space. But I’m not gay.”

As a counterpoint, Jowell’s own comments about parenting at beginning of each chapter are engaging.

Whatever you think of Kaplan’s decision to become a solo dad this memoir will give you plenty of food for thought.

As for Kaplan he knows he has his work cut out for him. “I know that Kaleb and I will have our differences. I’m ready to embrace those differences, and I know that mistakes are inevitable. But parents are not infallible.”

There are 20 pages of colour images and at the beginning of each chapter there is a picture of Kaleb.

The last word goes to Kim from the fertility clinic. “Nothing about Jonathan’s story is average. Anything but. Jonathan likes to be in control. But with fertility, as with life, nothing goes according to plan.”

Winging It is a fascinating and compelling read and there’s a surprising and unexpected twist at the end.