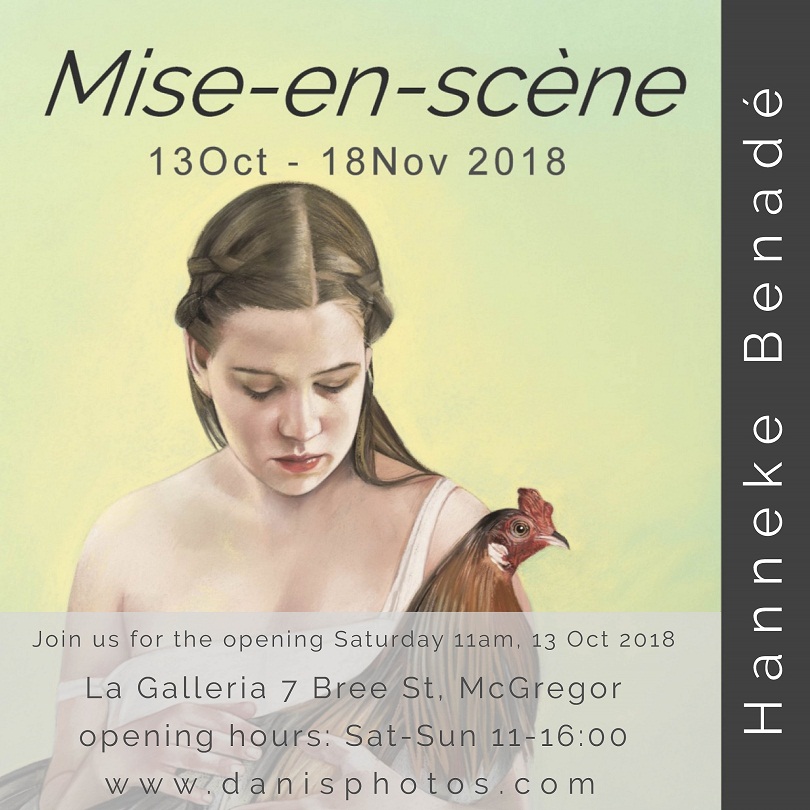 The French term ‘mise-en-scène’ originates in the theatre as a reference to the stage arrangement for a theatrical production and in film it also includes the visual component that appears in the composition of the shot.

In this new body of work, well- known South African artist Hanneke Benade ́, in the same way, choreographs images, depicting timeless moments of everyday life. By using models (actors), props and costumes that she manipulates into a scene, she aims to evoke an emotive response without placing the model in a setting of specific place and time. Benade ́says “To expand my longing to escape into a world of make believe scenes, I found a platform in art to develop alter-ego characters. It gave me the opportunity to create my own ‘film stills’. Quiet moments captured in a freeze frame. Where the character is eternally lost in time.  My work process is always routinely the same. I start with where I am (in life). I will ask my models to dress up in costume or a specific wardrobe. A pretend theatre production. I collect props and organise a photo-shoot. I am never sure what the outcome will be of a photo session, but it is where the drawings start taking shape in my head. From this I will select one image as reference to draw from. I realise now that choreographed images are a tendency throughout my work. In preschool dressing up in costumes was my favourite activity. I could transplace myself through transforming myself in costume and it feels the same with my work.”

This new work will be seen at La Galleria, McGregor for the first time. Gallery owner, Dani, says that he is very excited to host Benade ́new exhibition.  He says: “We love her work. It was by chance that we got to know each other. She came one day to visit the gallery and we had an interesting conversation about art and life, but she didn’t introduce herself as an artist at the time.  Fortunately, she left her details on the visitors-book and the day after, my friend and Artist Edna Fourie, came to visit me and recognized the name and she explained to me who Hanneke was. After seeing her website, we felt in love with her work and decided to contact her to offer a solo exhibition at La Galleria. We were very happy that she said yes.  Hanneke Benade ́ is also the first woman artist who will be exhibiting work at La Galleria.”

Hanneke Benade ́completed the degree BA (Fine Arts) in 1993 at the University of Pretoria. She majored in Printmaking/Lithography and worked as a part-time lecturer in drawing. From the start of her art career she took part in group shows locally and abroad. She participated at the Joburg Biennale and was represented at the London Art Fair. She has done various art exhibitions in Cape Town and Gauteng and is represented by The Everard Reads Gallery and other selected galleries. Hanneke received several awards, among them Merit Awards at the ABSA Atelier, Sasol New Signatures, The Thembisa Art Award, The Kebble Award and received two Kanna-Awards at the Klein Karoo Nasionale Kunstefees in Oudtshoorn (festival artist 2016.)  Some of her work are housed in collections of the Universities of Stellenbosch, -Pretoria, -Free State and University of Johannesburg; as well as Spier Holdings, Rand Merchant Bank, SAB, Hollard House, Pretoria Art Museum, Iziko Museum Cape Town, The Gauteng Provincial Government, British American Tobacco Company, Sanlam, Sasol, Telkom and ABSA and her work is housed in several private collections.

6 Pests Common to South Africa and How to Avoid Them