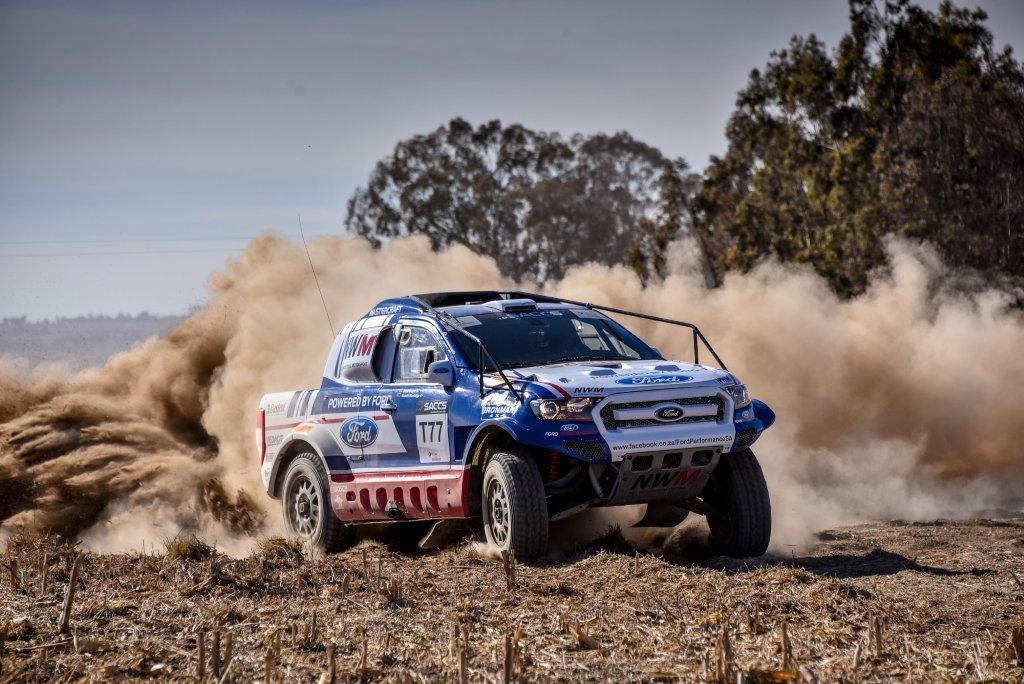 Having earned their first career win at this event last year, it was once again a stellar performance from the young pair in the NWM-built and run Ford Ranger, catapulting them from fourth to third place in the South African Cross Country Series (SACCS).

With their title rivals, Johan and Werner Horn (Toyota), encountering troubles and only managing sixth, it gives the Ford crew a bit more breathing space with their lead extended from four to nine points – thus setting the scene for yet another thrilling two-horse race for championship glory at the season finale.

With this year’s Harrismith 400 featuring an almost entirely new route, the primary objective for the Ford NWM team was to score maximum points without taking any risks that could sideline them in the fierce battle for the 2018 Class T Production Vehicle title.

As the SACCS Class T leaders, Lance Woolridge and Ward Huxtable were the fastest of the NWM Ford Rangers on Friday’s extremely windy and dusty sprint-style 39km qualifying session. They set the third-fastest time, which gave them an ideal starting position for Saturday’s main race without having to sweep the road – and, crucially, they were two places ahead of the Horn brothers.

Making the most of their local knowledge, Harrismith residents Jacques van Tonder and Sammy Redelinghuys caused a stir by powering their NWM-built privateer Ranger to the fastest qualifying time, 40 seconds ahead of Woolridge/Huxtable and 13 seconds quicker than second-placed Richard Leeke/Danie Stassen (BMW).

Gareth Woolridge and Boyd Dreyer were fourth quickest, just 7 sec behind their team-mates, perfectly placed to pounce as the race progressed.

This year’s new Harrismith 400 route featured a challenging mix of fast farm tracks and gravel roads, keeping the crews on their toes throughout the two 177km loops.

Lance and Ward started off well and were pushing hard, but despite the extremely dry and dusty conditions, they quite unexpectedly found themselves stuck in a mud hole located in a small forest section, just 65km into the race. Several other crews were nearly caught out by the same hazard, which cost the Ford team around two minutes to extricate themselves – thus undoing their early charge, resulting in them holding station in fourth at the end of loop one.

Gareth and Boyd were setting a blistering pace and fortunately had no major issues on the first loop, other than one of the right front shock absorbers breaking towards the end of the opening stint, which only hampered them on the big bumps. They came into the pits leading Class T by more than two minutes over Leeke/Stassen in second place, and almost three minutes ahead of Van Tonder/Redelinghuys who had dropped back to third.

With the damaged shock absorber replaced, Gareth and Boyd had a perfect run through the second loop and claimed their second Harrismith 400 win in a row with a total race time of 4 hours 35 min 10 sec – over 6 minutes ahead of Leeke/Stassen and a further 1 min 21 sec clear of third-placed Van Tonder/Redelinghuys.

As the Ford NWM team’s third win of the 2018 season, the maximum haul of 30 points powered the young duo into third place in the championship, ahead of Gary Bertholdt and Geoff Minnnitt (Toyota) who crossed the line fifth.

For Lance and Ward, their second loop was also a fraught affair. They set blistering times on the first part of the stage and were within 20 seconds of second-placed Leeke/Stassen with 80km to go, only to lose the front brakes on their Ranger. A cautious drive to the finish saw them claim a hard-fought fourth place.

With rivals Johan and Werner Horn also experiencing a difficult weekend and finishing sixth, Lance and Ward are now nine points ahead of the Toyota crew going into the last race, scheduled for 2-3 November in Westonaria, Gauteng.

Thanks to three Rangers finishing in the top four places, Ford won the coveted Manufacturers Award for the second time this year, to go along with the season-opener in Dullstroom.

Said Neil Woolridge (Team Principal): “This is a fantastic result for Gareth and Boyd, and I am happy for them that they have finally got the win that they’ve deserved this whole year. They have been very quick through the season but have also made some mistakes and been a bit unlucky at times.

“It’s a pity that Lance and Ward weren’t able to finish a bit higher, as it would have been ideal to head into the final race with a bigger lead. But the important thing is that we increased our points gap, and we have the momentum going into the last round.

“It was a great performance with both cars being really quick and finishing this race without a single puncture. Other than Gareth’s shock absorber and Lance’s brake issue, we didn’t have any problems with our vehicles. The whole team was also delighted to win the Manufacturers Award which was the cherry on the top.”

Gareth Woolridge (T77), said:  “We had a great weekend that was almost perfect, and it’s fantastic to score our second Class T victory in Harrismith once again, which moves us into third place in the championship.

“I was comfortable with our pace throughout the race and really enjoyed the route. The only issue we had was one of the right front shock absorbers bottoming out at times on the first loop. We stopped to check but couldn’t see anything wrong, so just took the big jumps a bit easier. After we replaced the broken shock during service, we had a clean run through to the finish.”

Added Lance Woolridge (T34): “After our perfect start to the season with two wins in a row, the last couple of races have been very frustrating. From the outset, I found it difficult to find the ideal balance between pushing for the win and keeping it clean. And then we got stuck in the mud hole and lost about two minutes.

“We definitely had the pace to fight our way back into third or even second place on loop two, but then we lost the front brakes, and it was really tough to slow the car with only the handbrake and the gearbox, and not lose too much time in the process.

“Overall I think we can be relatively content with finishing fourth and increasing our championship lead to nine points going into the final race.”

The final race of the 2018 SACCS season will take place on 2 and 3 November in Glenharvie, Westonaria, Gauteng. The event was originally planned for Sun City, but had to be relocated due to landowner authorisation not being granted for the race route.