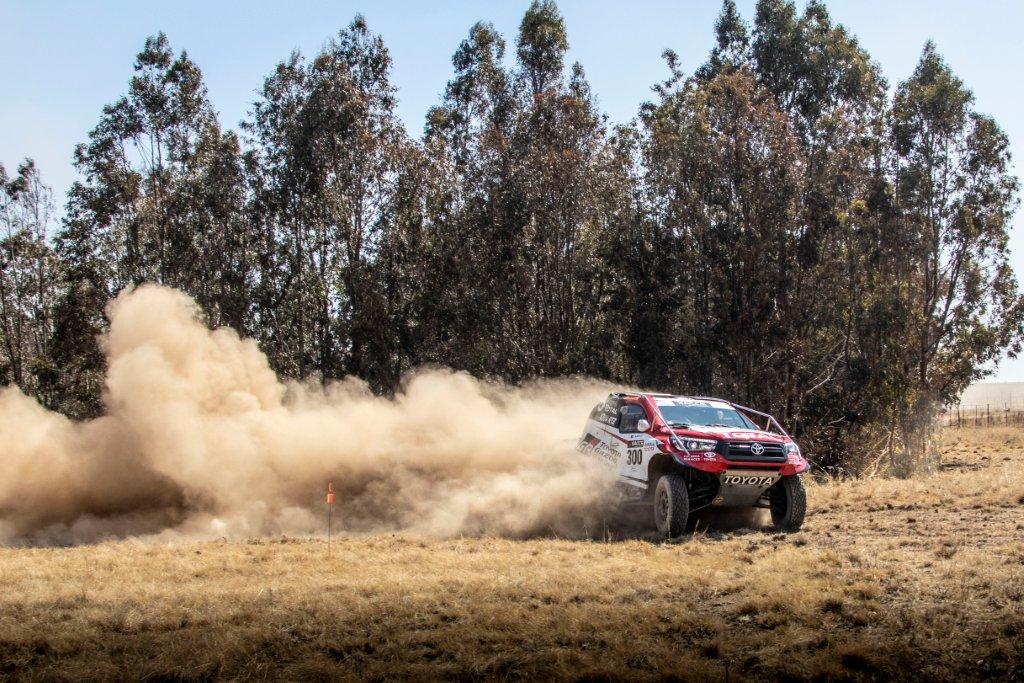 Brian Joss – It was a Toyota whitewash at the Harrismith 400, Round 5 of the 2018 South African Cross-Country Series (SACCS), as the first three cars across the line all had one thing in common: They were all Toyota Hilux race cars.

The race, which took place on 14 and 15 September, brought mixed results for the factory Toyota Gazoo Racing SA team. But thanks to stunning performances by a number of other Toyota crews, the manufacturer still had every reason to be proud.

Victory in Harrismith went to former champion Chris Visser with Philip Herselman beside him in the Atlas Copco-supported Toyota Hilux. It was a first overall victory for Visser/Herselman since joining the fray in Class FIA of the SACCS this year, and the burly farmer was ecstatic with his win.

“It has been a long time coming, and we’ve gotten close on a number of occasions,” said Visser from the Designated Service Park (DSP) at the Eeram Farmer’s Complex, to the west of the Freestate town of Harrismith. “But everything came together. The Hilux ran like clockwork, Philip was an ace on the notes, and I really gelled well with the terrain.”

Visser/Herselman brought their Toyota Hilux home just 01:34 ahead of Toyota Gazoo Racing SA’s Henk Lategan and Barry White, who were fresh from their maiden win at last month’s Atlas Copco 400 in Bronkhorstspruit. The factory crew had won the qualifying race for the Harrismith 400 on the Friday before the main event, but found the going tough during the remainder of the race.

“Opening the route was really difficult, though I think we might have been just a touch too cautious on the opening loop,” said Lategan after finishing the race. “We tried to push a bit harder during the second loop, but Chris drove like a man possessed, and in the end, we just couldn’t catch him.”

Third place, 04:54 behind Lategan/White, came the 4×4 Mega World Toyota Hilux of Jason Venter, with Jaco van Aardt beside him. The pair had last raced at the Toyota Kalahari Botswana 1,000 Desert Race in June, but it was a clear return to form for the former Class T champions.

“It was a good race for us,” said Venter after the event. “We came out here with the sole aim of having some fun, and maybe the relaxed attitude helped us go faster. Whatever the case may be, we had a great race and we’re very pleased to be on the overall podium.”

Things didn’t go quite as smoothly for Giniel de Villiers and Dennis Murphy, in the factory Toyota Gazoo Racing SA Hilux. Their weekend started with a broken tie rod during the qualifying race, forcing the pair to drop way down the order for the main race.

The windy conditions in Harrismith helped to keep the dust away, and when the flag dropped for the start of the main race, De Villiers/Murphy immediately pushed hard to make up for the time they lost during qualifying.

They finished the first of the Saturday’s two race loops as the tenth-fastest production car, having made up eight places in the production category – and many more in the overall standings.

“But then things went wrong for us,” said a rueful De Villiers after returning to the DSP without scoring points. “We overshot a corner slightly and hit a concrete block in tall grass. It broke the suspension of the Hilux, and even though we tried our best to make it home with our running repairs, we simply had too much damage.”

With Lategan/White finishing second, and De Villiers/Murphy not scoring points in Harrismith, the Production Championship is wide open. While the official standings won’t be updated until the results from the Harrismith

400 become official, it is likely that only ten points will separate De Villiers, at the top of the Production Category standings, from teammate Lategan in second place.

“We haven’t even started thinking about the maths, but we’re happy to have first and second place in the championship in hand – no matter which of our cars cross the line first during the final race,” said Toyota Gazoo Racing SA Team Principal, Glyn Hall, after the Harrismith 400. “With that said, we’ll keep pushing for the best possible race results.”

The Class T Championship has receded from the grasp of defending champions Johan and Werner Horn, as their Malalane Toyota Hilux suffered from incessant problems with the alternator belt throughout the Harrismith 400.

The pair lost time during the qualifying race, and then slid to 11th place in the final standings. At the same time championship rivals Lance Woolridge and Ward Huxtable (Ford Ranger) came home in fourth place in Class T, extending their lead at the top of the table. Only four points separated the two crews prior to Round 5.

“We were very disappointed with our results,” said a clearly emotional Johan Horn after the race. “We know that anything can still happen, but it is difficult to accept that we’ve lost ground in our quest for a second consecutive title.”

Class S saw championship hopefuls, Jannie Visser and son Chris, retire near the end of the race, handing the class championship to David Huddy and Gerhardt Schutte (Nissan Navara) in the process. The Vissers were 15 points behind Huddy/Schutte going into the penultimate round, but a DNF means that they are now out of contention, making Huddy and Schutte the new Class S champions.

The final round of the 2018 SACCS was scheduled to take place in the area near Sun City on 2 and 3 November, but the venue has now been changed to the Glen Harvie area, just 40 minutes from Johannesburg. The race will take place on the same dates, and promises to offer nail biting finishes in a number of classes – including the overall Production Category, where the two Toyota Gazoo Racing SA crews will be going head to head.