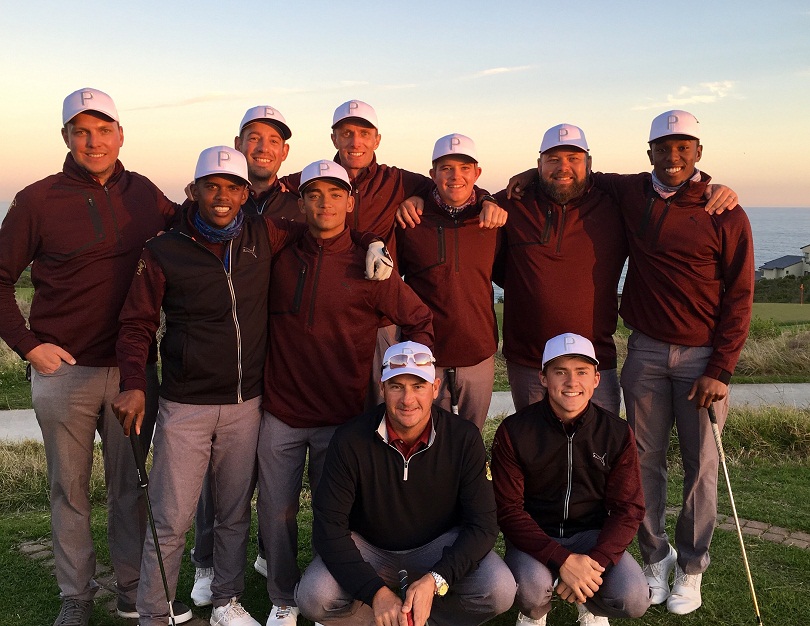 GEORGE, 20 September 2018 – Central Gauteng proved that there are two ways to silence the critics when they claimed a record 29th victory in the 58th South African Inter-Provincial Tournament, sponsored by Tempest Car Hire, at Oubaai Golf Club on Thursday.

The Lions not only defended the title with a round to spare, but they did it with two bankers and six new caps.

“Not many people thought we could do it,” said a beaming Jaco du Plessis after his charges wrapped victory with a 6.5 – 5.5 result against KwaZulu-Natal in the fourth round.

“We were probably third or fourth on the list of favourites against the coastal teams, but our players definitely validated their selection. Our results so far this week testifies to the incredible spirit of this team, their commitment to perform for each other and it is proof positive that the system we have in Central Gauteng breeds success.

“But it’s not quite over just yet. We have one more match left against Southern Cape and we’d like to leave Oubaai with the trophy and an unbeaten record. ”

Central Gauteng sounded a loud warning to the rest of the A-Section title contenders when they handed Free State a 9.5 – 2.5 drubbing in the opening round.

On day two, the Lions mowed down Gauteng North 8.5 – 3.5 and the youthful side showed great determination and a lot of heart to grind out a hard-fought for 7 – 5 victory over Ekurhuleni in the freezing cold, sweeping rain and gale force winds on day three.

After beating Central Gauteng, the team had to wait for the outcome of the match between Southern Cape and Gauteng North. When the Daisies won 6.5 – 5.5, the early celebrations could begin.

“We are obviously very proud and super stoked, because we didn’t expect this when we teed it up this morning,” said Du Plessis. “Southern Cape was only a point behind us in the standings and we knew they were going to try and make a proper game out of it against Gauteng North after getting back in the game on day three.

“Our match against KZN was an absolute dog fight. We were looking good in the foursomes at one stage, 3-1 up, but then Clayton Mansfield and Malcolm Mitchell played unbelievable golf to pull their match back and halve against Reece Haikney and Ruan Botha.

“We were a bit on the back foot starting the singles, but I told my guys we just needed four points to win and they knew what they needed to do. Our team demographic has really changed since Rustenburg in 2013. We try to get every guy to understand what their roles are within the team and the way our order is set up, every guy has a certain job to do.”

“There isn’t an easy match out here, especially not against KZN, but the guys went out there and batted really well,” said Du Plessis.

“Most of the matches were extremely close. Cole and Keelan had two really tough matches. Keelan got a win on 18 and Cole lost on the last. Reece was just phenomenal the way he came back against Byron to win 3 & 2.

“Darin de Smidt didn’t have a great week, but he is such a stalwart and an incredibly positive guy to have in the side. And our experienced banker and captain Ryan Dreyer was just absolutely ice again. He played unbelievable under the gun all week and birdied the last to win his match.

“Sam McKenzie…what a revelation he has been for us this week. He played unbelievable golf against Derek, who is so good he can make the main South African side. They had a humdinger of a match.  Sam was 1-up playing the last and he played it perfectly to get us the win and the 6.5 we needed.

“It’s never nice to see another team lose and hand us a win, but we did the hard yards first. You win the matches, you win the trophy. You do the basics right and you don’t rely on anybody else to do the work for you. You get the job done yourself.”

Du Plessis applauded the support from Central Gauteng Golf Union, which he stated is key to the team’s success.

“Doing the hard work before the time pays off,” he said. “The guys play together, they get match play fit. The guys operate as a team before we even get to the SA IPT.

“There has been a lot of changes at the union; a bunch on really supportive guys on a whole new executive and a great president in place that is there for the good of golf. I think it’s starting to show in our teams that if you do things right, you will start seeing the results.”

Southern Cape retained the number two spot in the log with five points, while Gauteng North – with five points, but with 1.5 games points less than the home union – moved into third. KwaZulu-Natal is fourth with four points.

Ekurhuleni, who hammered Free State 8.5 – 3.5 sits in fifth on 2 points and Free State, still hunting their first victory of the week, holds the last spot.