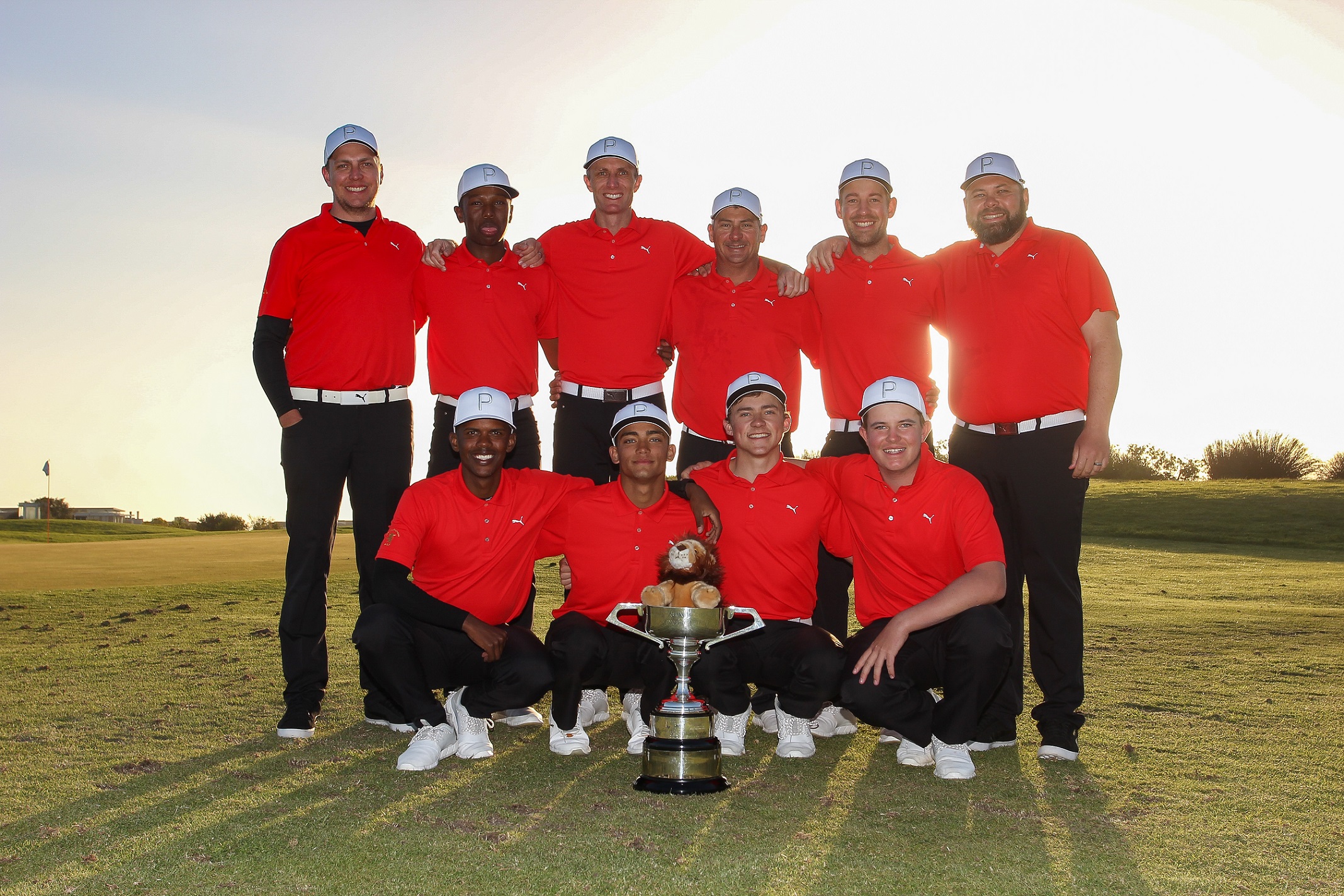 GEORGE, 21 September 2018 – Twelve months after a devastating relegation, Western Province rose from the ashes and won back their A-Section status with a show of unparalleled grit and determination in the South African Inter-Provincial Tournament.

The Disas defeated North West 10 – 2 in their final match and celebrated victory with an unbeaten run of 12 points and an astonishing 56 games points at Oubaai Golf Club on Friday.

“We are over the moon,” said team manager Carl Potgieter. “I cannot explain the incredible pride we share as a team right now. This was a team effort all the way and everyone deserves to take credit.”

“It shook us because the last time Western Province were sent down to the B-Section was back in 1982. It was a bitter pill to swallow, especially after we were relegated on games points. But as they say, denial is not a river in Egypt.

“We had some fundamental problems that we needed to fix and we addressed it all and started rebuilding. It took time, but we arrived in George with a really strong team and the goal was to dominate. The B-Section is tough. There aren’t any easy matches, but we belong in the A-Section and we wanted to prove it.

The five days of competition at the 58th edition of the premier teams’ tournament, sponsored by Tempest Car Hire, featured the usual mix of upsets and jostling for position, but Western Province proved once again that no matter how a good team looks on paper, golf is still played on grass.

The three bankers and five rookies dovetailed to perfection.

Western Province burst out of the blocks with victories over Boland and Eastern Province and rallied for four more points in round four, conceding just 2.5 points to Border and Limpopo.

They scored a convincing win over Mpumalanga in round three and, with an almost insurmountable lead, Western Province could enjoy their bye on day four with 10 points in hand and a tally of 46 games points.

“We knew the promotion was virtually guaranteed, but its match play; anything can happen and there was still an outside chance that Boland could beat us,” said skipper Luca Filippi.

“They needed to beat Border by a big margin and we would have had to lose or draw against North West. We came into the final round with the goal of winning big with a huge games count. We went out there and executed.”

Boland was off first on the final day and threw down the gauntlet, beating Border 11 – 1.

Western Province responded with a clean sweep in the foursomes and victories from Neswill Croy, Cameron Johnston, Ayden Senger, Tyran Snyders and Deon Germishuys in the singles.

“We had the victory guaranteed, but it was a very special moment to stand around the final green and watch our captain close out a 10 – 2 win with a birdie finish.

“We set our combinations early on and I believe that added to the sense of continuity this week. As much as golf is an individual game, our team spirit was phenomenal and definitely played a massive role in our success.”

The A-Section was decided in round four when Central Gauteng defeated KwaZulu-Natal 6.5 – 5.5 to lift the title for a record 29th time.

Southern Cape failed in their effort to send the tournament into a final day decider, but came out guns blazing against the champions to win 8.5 – 3.5 that netted the host union second in the log.