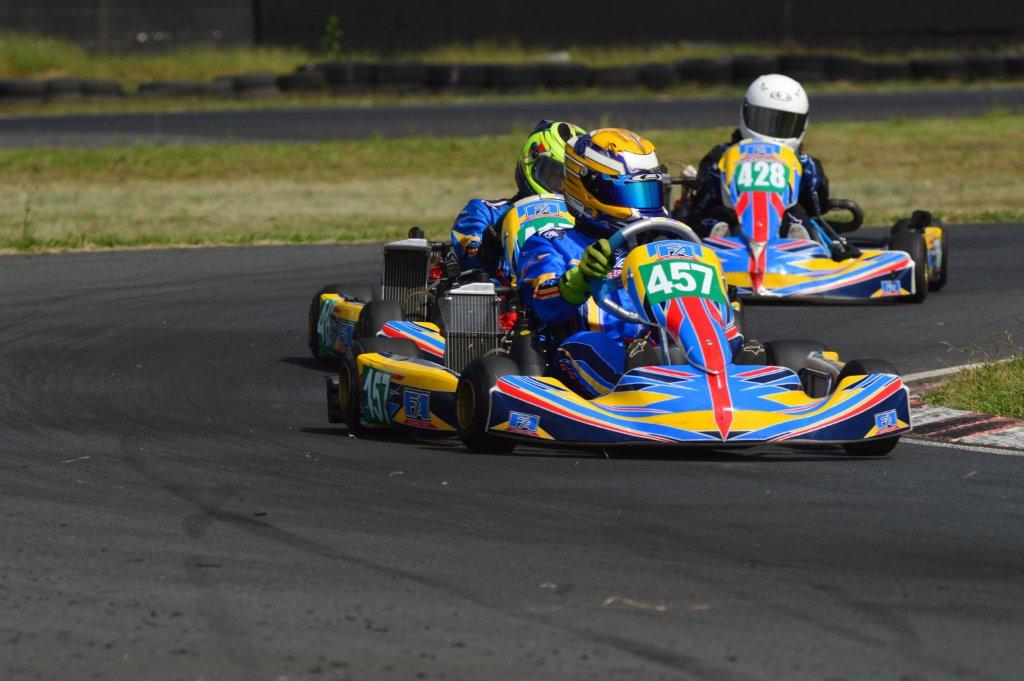 Brian Joss – The final of the four-round Rotax South African National Karting Championship starts on Friday September 28 at Zwartkops with practide, qualifying on Saturday September 29, and then four races for each of the six classes on Sunday, September 30.

The most competitive kart racing season in decades. That’s the prognosis for the 2018 Rotax South African National Championship karting series, which goes down to the wire at the Zwartkops Kart Raceway near Pretoria On Sunday, September 30.

“Since the series started in 2000, this year has seen the level of competitiveness and the number of entries move to a higher level than ever before,” says series co-ordinator Jennifer Verheul.

“The big fields have continued to amaze us throughout the season, and for the finals on September 29 and 30 we are expecting more of the same.”

There is certainly lots to play for. Apart from winning National Championship titles, the winners in each class receive an entry to the Rotax Grand Finals in Brazil, where they will compete as a South African team against 360 drivers from over 50 countries. The Grand Finals, effectively the World Championship of Rotax karting, takes place over the week of November 24 to December 1.

This system is in place to compensate drivers who may have suffered bad luck at some point in the season, either through tangling with a fellow competitor and being knocked out, or suffering mechanical trouble. Kart racing is so competitive today that a first-lap incident is very difficult to recover from, and all the competitors agree that the points scoring system is a great way ensuring that the cream rises to the top.

Going into this final round, however, the potential to add to points tallies sometimes favours those drivers who have already had low points-scoring finishes in the previous three rounds. They can then substitute these scores with top points-paying positions earned at the final round on September 30.

The prestige class in the Rotax series, as well as the fastest class, the DD2 twin-speed gearbox class in South Africa has attracted consistent fields of up to 25 drivers this season over the three Nationals held to date. And heading up the points table going into the final round is Benjamin Habig from KZN.

Habig has brought a new level of focus and consistency to his race game this year, and his lead is well-deserved. However, his margin over second-placed Arnold Neveling of Vereeniging is a slender 6,17 points. And Neveling, already a four-times winner in 2018, has suffered some low points scoring positions so far, so the chances of him substantially improving his points tally are very good.

In a somewhat unexpected third place overall in DD2 is veteran driver Michael Stephen, his championship position due in no small measure to his out-guessing the opposition at the opening wet round of the championship at Idube, KZN.

Possibly surprised to find himself down in fourth place in DD2 will be multiple title winner and current champion Bradley Liebenberg, who has not had things really go his way this season. However, a win, a second place and a third so far prove that the Lonehill driver has lost none of his essential pace, and again, he has some low points-scoring races that he can substitute with top-flight positions on Saturday.

Cape Town’s Luke Herring has shown really good pace on occasion this season, including two wins, and he is another to watch for on September 30, although a shot out the title looks a bit optimistic at this stage. Jurie Swart and Jason Coetzee (Western Province) are also race-winning possibilities in the finals.

The DD2 Masters championship is run as a race-within-a-race for DD2 drivers aged 32 and over. As he has done in the past few seasons, current champ Michael Stephen looks the most likely to win this title again, as he has a near unassailable 55 point lead, comprising some seven wins out of the nine races held to date. However, for race wins on Sunday, it would be unwise to discount KZN’s Cristiano Morgado, who recently won the Africa Open title at Zwartkops, and can in fact claw his total points tally very close to Stephen’s, if all goes according to plan for Cristiano in the final round.

Senior Max (for drivers aged 14 and over) for single-speed high-horsepower Rotax-engined karts has been attracting some good fields this year. And it is good to see another popular KZN driver, Dominic Lincoln, lead this championship going into the final round. Lincoln is a three-time race-winner in 2018 and has backed that up with some really strong top three positions, as well as solid drives in the races when he wasn’t able to fight for the lead.

He will have his work cut-out at Zwartkops, however, to hold off Cape Town’s Jason Coetzee, who in fact has four wins to his name to date. Coetzee, however, will only be able to count three more races to his points tally, as he has suffered a disqualification this season, and any DQ race has to stand in the final points tally, according to the championship rules.

In third place is the ever-green Nicholas Verheul, followed by Jonathan Pieterse (competing in both Senior Max and DD2 Masters this year) and Gauteng’s Wayland Wyman, enjoying a very competitive season to date.

With the exception of DD2, Junior Max (for drivers aged 12-15), is the most competitive class in South African kart racing right now. As it is a feeder formula for the top classes, it bodes well that Junior Max consistently attracts fields of up to 20 karts for the Nationals, and the action at the sharp end of the grid is as tight as can be.

However, the driver who has had just that slight edge over everyone else this year is Cape Town’s Charl Visser. Charl has been a top contender in local karting for some seasons now, and his race craft and pace has been superb this season. He has notched four race wins to date and a string of top-four placings to lead the points chase by a healthy margin off 33.

Gauteng’s Jarrod Waberski has really come of age this year and he got his season off to a fine start with race wins at Idube. On home turf, he will nevertheless have his hands full on September 30 from the likes of third-placed Joseph Oelz from Cape Town. Leyton Fourie, who has matured nicely in his first season in Junior Max to lie fourth in the title chase, will unfortunately miss the final, as he had pre-booked a trip to take part in the Euro Challenge. Aqil Alibhai, Tate Bishop and Kwanda Mokoena are all capable of upsetting the applecart at Zwartkops, Mokoena having enjoyed a great showing at the recent Cape Town National round, where he claimed a string of podium finishes.

Mikhail Fernandez (Mini Max (Drivers aged 9-13) is a Cape Town based SAKRA driver that has really come good this season, and he goes into the final round at Zwartkops as the somewhat unexpected championship leader of this competitive class for youngsters still in Junior School.

What will count against Fernandez on September 30 is that he will be forced to drop some good point-scoring positions achieved in the first three rounds. His title rival, Kyle Visser (brother of Charl) has no such problems. A total of three wins and a couple of podiums to date sees him just 7,8 points adrift of the title lead, while he can drop some poor point-scoring rounds. Fernandez’s only reply will be to finish ahead of Visser at Zwartkops, thus nullifying any points gains!

Gauteng’s Joshua De Paiva lies third in the title race, ahead of Jordan Brooks, who had a very good opening to his season with three straight wins at Idube, and needs to resurrect that form at Zwartkops.

Of course, there are a number of other drivers who can upset the title chase balance at Round Four and these include Liam de Beer, Josh le Roux, Joaquin de Oliveira and Jayden Goosen.

Micro Max (For drivers aged 7-11) is the class for the class for the youngest drivers competing for a National Championship in 2018. But the level of competitiveness here, as well as race craft and sheer determination to win has to be experienced to be believed, from these youngsters aged just 7 to 11 years-old!

As things stand now, the series is led by Joshua De Paiva, but right on his heels in the points chase is fellow Gauteng driver Muhammad Wally. Wally, the current champion, will be keen to make up for an indifferent start to the season he experienced in Idube, and right now he is the form driver here. It will be interesting to see if De Paiva can reverse the Wally come-back charge on his title!

*The winners of each National title at the 2018 Rotax South African Karting Championship will gain entry to a place in the 2018 Rotax Grand Finals, the World Championship of Rotax karting. No less than 360 drivers from over 50 countries are expected to compete this year in Brazil over the last week in November, with the finals on December 1.

Unique to any other racing series in the world, each driver is presented with a brand new kart chassis and engine, as well as tyres, fuel, a kart trolley and tools. This enables absolute parity of equipment in this karting series, as all karts are checked for legality after each on-track session.