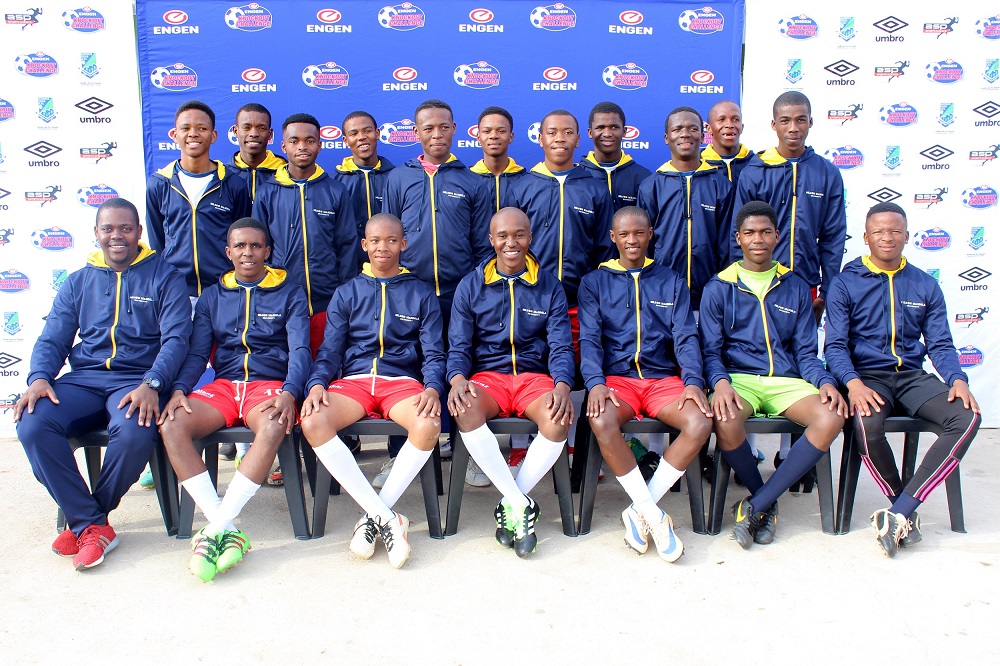 A number of successes during its seven-year existence have underlined the value of the Madibaz Football Club’s outreach programme with township schools.

Having started in 2011 with Phakamisa High, the club linked hands with Zwide school Ndzondelelo High in 2014 and the sustainability of the arrangement is a firm step in the right direction.

Madibaz Sport Football manager Mark Tommy said they had initiated the project to create a permanent form of development, rather than the one-off tournaments and clinics they had previously arranged.

In the most recent evidence of the programme’s success, Ndzondelelo won the U19 provincial final of the Kay Motsepe Cup and will represent the Eastern Cape in the national finals of the competition next month.

Ndzondelelo coach Asanda Gomba said this outcome, in addition to league successes in the U16 and U18 age-groups, was a direct result of the association between the Nelson Mandela University club and the school.

“This programme has helped the [Ndzondelelo] team to achieve in school tournaments and their participation in the Pefa [Port Elizabeth Football Association] leagues makes it much easier for our coaches,” he said.

“The rhythm of the players’ performances never stops. We take time to prepare the boys during the Pefa leagues and have achieved much success against clubs who essentially draw their players from all over the city.”

Besides the Kay Motsepe success, Gomba said their teams won the Pefa U16 league and Knockout competition in 2016 and 2017. The U18s are in the Knockout final this year.

“In the U18 league, our biggest rivals are Chippa United, an academy team selected from the best players in the city.

“I am extremely proud of our achievements because the team have also twice qualified to play in the Engen U17 regional tournament.”

Ndzondelelo teacher Dumisa Thys, who has been intimately involved with the project since the start, said becoming the Kay Motsepe U19 Eastern Cape champions was one of the school’s “greatest achievements”.

“We are the fourth school from this region to qualify for the national finals,” he said.

“It has put Ndzondelelo on the map as one of the best football schools in this region as we were able to win this competition in our district back-to-back.”

He added the Ndzondelelo High had been best known as a rugby school, but that football had grown through the Madibaz programme to become a recognised code “not only in our school, but in the entire region”.

“Because of our success in boys’ football, interest was stimulated among the girls and the U15 team are the current champions in the Safa-NMB league.

“This, in turn, has generated interest from pupils, not only in Zwide, but from areas such as Motherwell and New Brighton, who want to attend Ndzondelelo High.”

Thys paid tribute to Tommy for providing his school this golden opportunity.

“We are privileged and honoured to be part of Madibaz Football Club family.”

As football is a priority sport code at Nelson Mandela University, Tommy said they had an obligation to ensure outreach and engagement opportunities in their communities.

“Taking university sport to communities has benefits for all the parties,” he said.

“The relationship with Ndzondelelo is value-driven and one of empowerment, where young football pupils have the opportunity to sharpen their natural talent and to participate in structured leagues.”

He added that the club covered all the logistical requirements for the two teams, including transport to and from league matches, the provision of training equipment, playing kit and tracksuits.

The programme also made provision for coaches to attend the necessary coach education workshops, as well as refereeing and first-aid courses, said Tommy.

“Coaches Asanda Gomba and Phumelelo Mvunyiswa have been involved in the outreach programme since the inception at Phakamisa High, where Dumisa was teaching in 2012, before moving to Ndzondelelo a year later.”

The Madibaz manager said the previously held tournaments and coaching clinics did not provide an accurate gauge of what they were trying to achieve.

“We wanted to create a more sustainable programme,” added Tommy. “The once-off programmes were good from an awareness and publicity aspect, but not really for improving the lives of young people.

“As a former teacher, I knew that for a sustainable programme to succeed I had to identify a committed teacher in schools football who could drive the project.

“I collaborated with Dumisa, who has been the bedrock on which the success of this programme has been built.”

He said they viewed the project as one that would be ongoing.

“Funding remains a challenge as the programme is run without sponsorship and is totally reliant on the Madibaz Football Club for resources.

“But the benefits are evident and we are in it for the long haul. Hopefully we can attract sponsorship to support us in this initiative.”