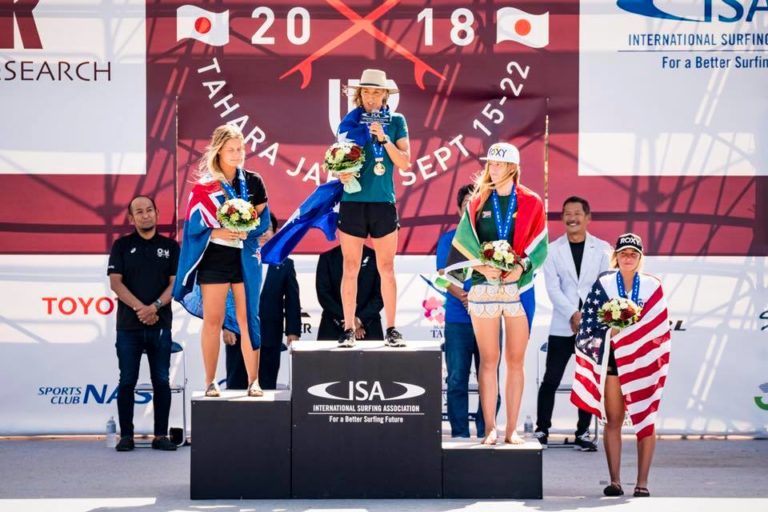 Team captain Bianca Buitendag bagged a brace of medals for South Africa on the final day of the week-long 2018 Urban Research ISA World Surfing Games at Long Beach in Tahara, Japan on Saturday.

Buitendag’s third-place finish in the final of the women’s event in the annual ISA showpiece saw her add the bronze medal to the copper medal she won for fourth place at the corresponding event in France last year.

And the 730 points she earned was enough for the Mercedes-Benz Buffalo City South African surfing team to overtake Team France and finish in fourth place out of the 42 nations at the event. Their copper medal is the country’s first team medal since their gold medal performance in Panama in 2013.

Host nation Japan clinched a historic gold medal, their first team medal ever, with Australia taking the silver medal and the USA the bronze.

The final day of action started with Buitendag one heat away from the women’s grand final. But she finished fourth and well off the pace set by eventual gold and silver medallists Sally Fitzgibbons (Australia) and Paige Hareb (New Zealand).

Then the two French surfers still in contention were eliminated in their Repechage encounters, dropping last year’s team champions from third to sixth place and giving South Africa the chance to secure the fourth-place team medal if Buitendag reached the final.

The former Championship Tour surfer from Victoria Bay has been struggling with a long-term back injury but produced a stellar performance in the Repechage final. She opened her account with rides of 7.67 and 8.17, each out 10, and went on to win the heat convincingly, clinching the team medal for her country.

The final saw Fitzgibbons streak into an unassailable lead with a pair of nine-point rides before the South African had caught a single wave. While Hareb and Summer Macedo (USA) racked up rides, Buitendag continued to wait for waves with high-scoring potential, eventually catching her first ride with 10 of the 25 minutes remaining.

Although the 6.33 she was awarded by the judges left her still needing to post two rides to catch Fitzgibbons, the South African captain maintained her patient approach until the final minute when she finally caught a second scoring wave, a 5.97, that saw her overtake Macedo for third place and clinch the bronze medal.

ISA president Fernando Aguerre, who was elected for a ninth consecutive term since 1994, delivered a customary upbeat final statement to close the event.

‘This is a truly a momentous occasion for the history of surfing, as we have seen Team Japan assert themselves as one of the emerging, global powerhouses of the sport. Japan has a strong, rich surfing culture and the timing could not be better for them to win the gold with the Tokyo 2020 Olympics fast approaching.

‘The year of 2018 will stick in our memories for many reasons, as we saw the epic waves that the Japanese coastline can provide, we saw the progression of women’s surfing with the first edition to feature gender equality in competition slots, and we saw the talents of new and solidified stars of surfing who rose to the occasion on a global stage.’

The men’s event was completed on Wednesday with Santiago Muniz of Argentina earning a second gold medal to go with his victory in the 2011 event. The South American finished ahead of overwhelming favourite Kanoa Igarashi of Japan with Luca Mesinas (Peru) and Shun Murakami (Japan) taking third and fourth places respectively.

Nicole Pallet of La Lucia and Zoe Steyn of East London, both of whom made their debuts on the South African team, finished 25th and 37th respectively in the women’s event.

PHOTO: Buitendag on the podium in Japan, by ISA/Reed