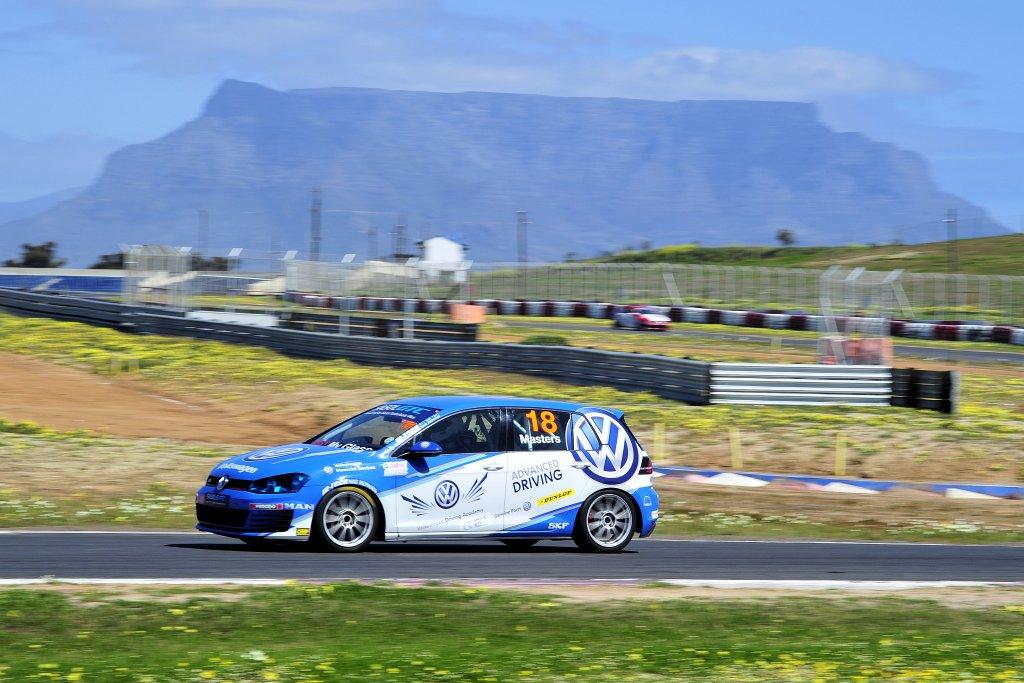 Brian Joss – The eighth round of the Sasol GTC Championship saw Keagan Masters deliver a knock-out blow to his title rivals by taking his Volkswagen Advanced Driving Golf GTi to a double victory in the GTC2 class while teammate Adrian Wood banked two podium positions in his Kyocera Volkswagen Golf GTi.

The bruising GTC class saw Daniel Rowe race his Volkswagen Jetta GTC to a fourth and sixth place finish, while Mathew Hodges’ run of bad luck continued after his Jetta GTC was forced into retirement after a clash with a rival in the second race after banking sixth place points in the first 12-lap race.

Rowe was well in the mix in Friday’s free practice sessions with Hodges shadowing his teammate. When qualifying got underway in cold and windy conditions on Saturday, Rowe took the fifth fastest time and Hodges seventh.

Keagan Masters missed pole position in GTC2 by 0.14 seconds while Wood slotted into third on the grid.

The first race of the day saw Rowe involved in a frenetic, four-car battle for third position; positions changed several times a lap in a high-speed game of musical chairs. When the chequered flag came out to end a breathtaking race, Rowe was 0.9 seconds away from a podium finish. Hodges picked up a puncture on lap three and circulated to sixth place.

The first GTC2 race was also one to have the Cape Town crowd on their feet.

Charl Smalberger (VW Golf GTi) led from start to finish with Masters a coat of paint behind. In spite of a healthy championship lead going into the race, Masters harassed the leader all the way to the flag. Post-race scrutineering found Smalberger’s car to be underweight, the resultant penalty promoting Masters into first place. Wood took a strong third place, behind Trevor Bland (VW Golf GTi), giving VW a 1-2-3 result.

From third position on the inverted grid, Hodges made a good start but while challenging Robert Wolk (BMW) for position through turn four, Wolk collided with Hodges, the impact ripping the tyre from the Jetta’s rim, leaving the luckless driver to retire. Rowe had a quiet race in the sixth place.

Masters started from the back of the GTC2 grid but within two laps had carved his way to fourth position. He hunted down Smalberger and after two different attempts to get past the race leader, made the move stick with three laps remaining. He opened a gap to the chasing pack, again leading home a Volkswagen 1-2-3, with Wood ending ahead of Trevor Bland’s VW Golf GTi.

“It was a difficult day for the team,” said Mike Rowe, Head of Volkswagen Motorsport. “After our Kyalami showing earlier in the month, we expected more from this race meeting. We will analyse the imbalance the drivers experienced and come back strongly next month. Keagan drove like a champion and is within sight of back-to-back titles, while Adrian had a consistent day and earned a pair of podiums.”

Volkswagen Motorsport’s final appearance of the season is at Zwartkops Raceway on  October 20. Masters needs just four points from 40 available to take the GTC2 title.