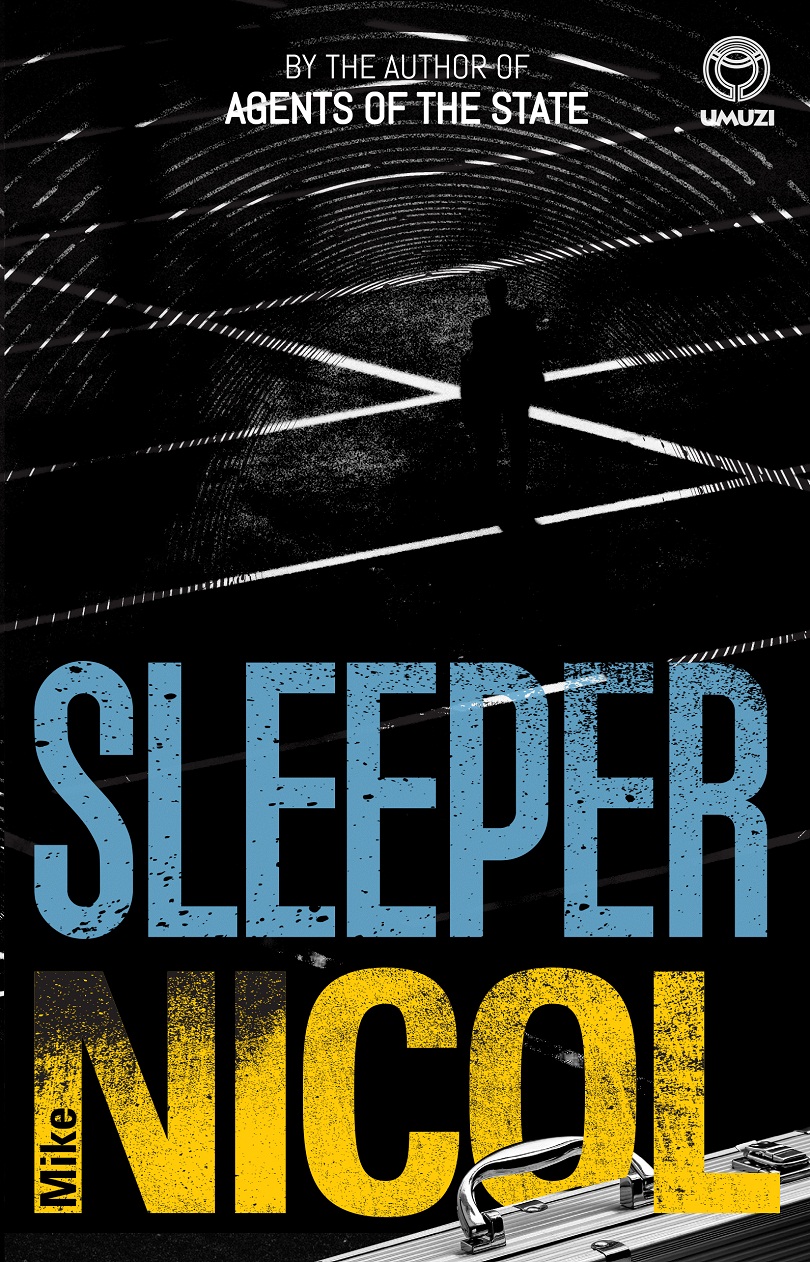 Sleeper is the third in the series featuring secret agent Vicki Kahn and her lover, surfer boy Bartolomeu “Fish” Pescado, a Muizenberg PI. In Agents of the State they investigated child trafficking and an assassination attempt on the president. The pair first featured in Of Cops and Robbers along with the wily Henry Davidson, the master spy, a survivor of the various regime changes, who quotes Alice in Wonderland. There is also the inscrutable Mart “Chief” Velaze whose handler is The “go with the ancestors” Voice.

Kahn has quit the Agency, better known as the Aviary, and is now working as a lawyer with an NGO involved in settling land claims. Caitlyn Suarez has been accused of murdering her lover, energy minister, Viktor Kweza, and she has hired Fish to find his killer. Flip Nel, Fish’s next door neighbour is the cop investigating the murder. But he commits suicide by tying himself to the anchor rope and diving overboard while the pair of them are fishing from the Maryjane. The boat’s name is apt as Fish deals in marijuana and some of his clients are top academics, including Prof Summers, who in exchange for a “bankie” will help Fish with research, the more esoteric the better. Flip leaves a cryptic message on his old Nokia, which directs Fish to look under Caitlyn Suarez. ‘You want the Suarez file. It’s in my kitchen. See under S.’ But everyone else is looking for that file and Suarez, too, who has gone missing. In the back story a top nuclear scientist Dr Robert Wainwright has been coerced into stealing a brick of HEU, highly enriched uranium, which is used to make “dirty” bombs. The theft has been engineered by the director general of the energy department, Dr Ato Molapo who is the president’s son-in-law and he has promised the Iranians, Muhammed Ahmadi and Mohammed Hashim who meet Wainwright at a boozy lunch, that he will deliver the goods.  Molapo tells Wainwright there is a  “green light… on this project… from the highest level.” Even though the scientist has been given an “advance” commission he knows the deal is wrong and he alerts the secret service. Meanwhile Davidson lures Vicki, who has a gambling addiction, back to the Aviary for one last job: to babysit Wainwright.

The tension ratchets up a couple of notches when Vicki persuades the scientist to fall in with the Iranians’ schedule who are planning to drive him to Brandvlei in the desolate Koue Bokkeveld to a nuclear waste facility where he will get the HEU for the Iranians who will take it to Johannesburg. And Vicki follows them. However, life doesn’t go according to plan. There is a shooting and Wainwright and Vicki are kidnapped by Mira Yavari and with one of the Iranians, the other one is killed,  and taking the HEU, drive to a desolate farmhouse in the Cape Winelands where Yavari, who is not who she seems to be, forces Wainwright to construct a bomb.

Fish is worried about Vicky because he can’t contact her. Finally he deciphers the clue on Flip’s phone, and it leads him to Vergenoegd Farm, where everything becomes clear and the Sleeper is unmasked.

Nicol is a master storyteller and with a few well-chosen pithy sentences he can put you in the centre of the action. You can feel Vicki’s pain when she is being tortured; you can smell Wainwright’s fear when he realises what he’s done and what he still has to do;  you have sympathy for Malapo even though he is a sleazebag; and you worry for Fish when he gets locked up at Caledon Square by “Columbo” and the NPA, who tell Fish that his client will soon be arrested, if he tells them where she is. Fish is also sucker punched by Bill ‘n Ben, the CIA men who are also hot on the heels of Suarez, but they want her for different reasons.

NPA commissioner, Moosa Gogol, is another player that can’t be trusted, playing as he does both ends against the middle.  Janet, the homeless woman, who is Fish’s unofficial security guard at his Ermington Road home, is a character in her own right even though she only has cameo roles in the series. Security specialist Krista Bishop makes another brief appearance, as does her father Mace and Rings Saturen, gangster turned politician.

Sleeper is as South African as biltong featuring as it does corruption in high places; the ‘nuclear kalinka with the Russkies’; shades of state capture;  backstabbing, and, lurking on the periphery, Isis. Most of the action takes place in Cape Town and you’ll recognise many of the landmarks: Giovanni’s Deli World where spy meets spy; Dunkley Square; Signal Hill and Chapman’s Peak.

Nicol, who lives in Fish Hoek, gets better and better with each outing, is at the top of his game with Sleeper and it shows just why he is one of the best crime writers around, and not just at home. Sleeper will keep you awake until you’ve turned the last page.