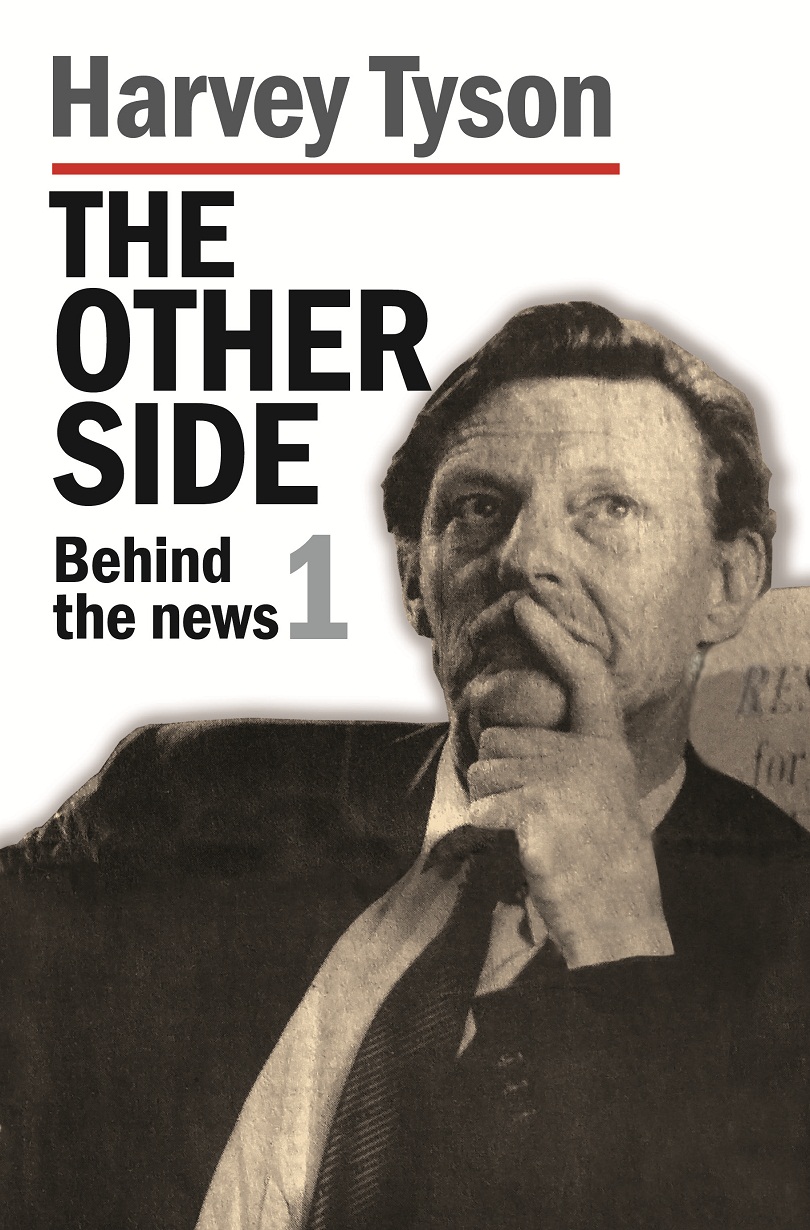 Behind the news Book 1

In the foreword, Harvey Tyson, who has been in the news business for more than 70 years, points out that ,”If we are to make sense of all our versions of modern history, we also need to be aware that our shared ‘yesterdays’ were fashioned by the tumultuous times of the ‘day-before-yesterday’, the 1800s which still haunt all of us, especially the people of many cultures still seeking equality and true democracy in South Africa.”

Which is why, to put our personal short-term histories into context, we need to begin by looking at that “markedly disruptive 19th century”. But, Tyson, reminds us, that everybody’s history always has at least two sides. That’s why it is always important to look at the other side of the story, and Tyson uses as an example Thomas Sheffield’s “Story of the Settlement” published in 1884 beginning with the “Battle of Grahamstown”. However, neither Sheffield nor his colleagues seemed aware that the Xhosa also had a role to play. It was a one-sided version of events, and in my opinion, not much different from the way news is presented in today’s newspapers or how it is voiced by Twitterati and Face bookers on social media. Much of it is fake news. Today, says Tyson, offers different views of those events of 200 years ago. Dr JB Peires, after years of research produced his book, The House of  Phalo, deliberately designed to balance history, giving largely the Xhosa view. “What’s missing in today’s histories is a sense of time,” Tyson postulates.

In The Other Side, apart from giving us his family’s history, one that links awareness of the memories of the day before yesterday with events of yesterday and today, Tyson muses a lot on the nature of news and in a “journalistic style” so you are reading it in the way you would a newspaper which gives it a present day feel. This section ends with 100 years of newspaper headlines between 1910 and 2020. Some of them will bring back memories: 1910 The Founding of a Nation (if you’re old enough); Airplane mails collide; New traffic device (when the robot was introduced to SA in 1929); Sentenced to Death (after being found guilty of his step-brother’s killing, Herman Charles Bosman’s death sentence was commuted. Later he wrote Stone Cold Jug, an account of his prison experience, along with many Oom Schalk Lourens stories). Moving on, other headlines included the Hindenburg Disaster; Atomic bomb kills nearly every living thing; Let me very frank, says UK Premier (on Harold Macmillan’s famous Winds of Change speech); Government and ANC take first steps to peace and the Rainbow Covenant (the swearing in of Nelson Mandela as president). Tyson also peers momentarily into the future. But starting with the headline of the year on September 11 2001: Hijacked aircraft destroy NY World Trade Centre and ending with the prediction that after 2020 (there will be) Food, to feed billions more people, and he highlights technology as a double-edged sword.

Tyson recounts some of his battles with the apartheid government and the run-ins he had with the security police on behalf of some of his staff and regrets that he didn’t do more to help some of them. Not shy to hide from controversy Tyson recalls the spy fever that was rampant in newsrooms at time and he describes some of his staffers who were fingered as spies, baseless as it happened, but he doesn’t name them. The former editor also touches on the loyalty or otherwise of the black reporters and notes that the black news editor or his deputy would have great difficulty exercising his authority, not over whites who “offered untypical respect” but over the black reporters.

Tyson also writes that he had no choice but to publish the story about the Reverend Allan Boesak, the outspoken anti-apartheid activist cleric and his illicit love affair.

Many editors had the material but they did not use it for fear of offending anyone including US  Senator Ted Kennedy who was scheduled to meet him in South Africa. Incidentally the reporter who broke the story was Chris Steyn, co-author of the Lost Boys of  Bird Island (The Gremlin, August 22).

Tyson remembers his stint as public relations executive for the Chamber of Mines in gold’s heyday where he lived the life of Riley but soon hankered for the daily cut and thrust of the newsroom and went back to his passion, newspapers.

In the 1987 whites only referendum on the planned tricameral parliament which Tyson mentions, he would not endorse a yes or no vote, instead he advised his readers to abstain. It wasn’t long, however, before some wag in the Sauer Street building put up a notice that, “The editor’s indecision is final”.  However, he doesn’t mention that. But he does admit that one of his worst mistakes was allowing a report from an untested source to be published, claiming that Ruth First was assassinated by her communist colleagues. Which was libellous. Tyson persuaded the Argus Group to pay out, unasked a sum greater than they had previously paid for a libellous claim. But the family couldn’t collect as they were in exile. Much later Tyson was able to apologise to the family.

One of the few privileged people, Tyson was fortunate to have a unique view of the passing show: he “knew” and questioned the Malans; prime minister Dr DF, “Sailor”, the RAF ace and Magnus, minister of defence, who has latterly been linked to The Lost Boys of Bird Island; BJ Vorster; PW Botha; Nelson Mandela and FW de Klerk, and he was also at the death bed of one of South Africa’s most famous sons, Jan Smuts. You will have to read the book to find out why.

There are a few light-hearted moments that Tyson writes about in his own inimitable style. How he ended up in the newspaper business makes interesting reading. And the heart-rending moments, one of which was when the apartheid regime hanged 25 people in one day. Not a record to bruit about but it was made into a film based on the book Shepherds and Butchers by Chris Marnewick. Although Tyson didn’t report on the story (he was at the time the parliamentary correspondent) the brutal act is recorded, as are several other historic moments including the student protests of 1976 that helped to change the course of South Africa’s history.

The ex-editor has presided over many amazing changes in the newsroom that not many people could have predicted, including the computerisation of the newspaper business.

The Other Side is an engrossing and thought-provoking read. I am looking forward to the sequel, End of the Deadline, Behind the News, which is currently in production.