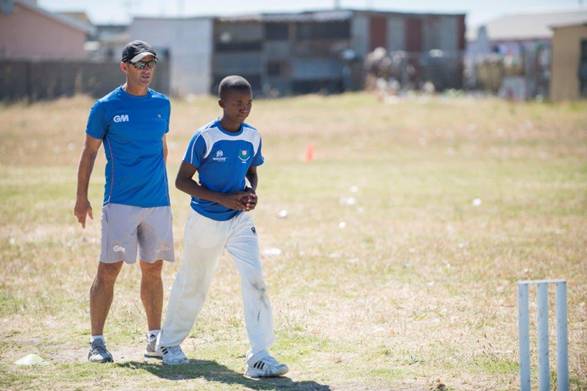 The competition features players from four schools in Khayelitsha boasting a mix of the region’s best up and coming cricketers.

The six-a-side format has gained global popularity in recent years and will provide the ideal platform for high octane cricket.

Thirty-six players including 12 girls will be part of the inaugural event to be staged at Masiphumelele Primary School.

Gary Kirsten is delighted with the initiative and is looking forward to watching these youngsters exhibit their skills.

“It is a wonderful opportunity for the young player’s within the GKF Foundation’s coaching programme to put their skills to the test,” Kirsten said.

“We are very excited about the tournament, thankful to the sponsor and just looking forward to seeing the abundance of talent that we know exists in the township,” Kirsten added.

Foundation Head Coach, Sivuyile Mfunelwa who hails from the region believes the competition will bring the best out of these rising stars.

“Most of these players have never played in a big event like this before, this is a good way of introducing them to competition with the hope that in the near future they will move from 6-a-side to the full 11-a-side format,” Mfunelwa said.

A healthy rivalry has developed in the township in recent years and Mfunelwa expects a highly competitive environment on matchday.

“There is a lot of pride and bragging rights on the line. We are expecting everyone to give their best,” Mfunelwa said.

He continued, “The tournament provides important game time for these young players to test and execute all the skills they learned and practiced during the winter off-season.”

GKF’s Township Cricket Development programme has elevated the sport in the region immensely. In the space of just four years, hundreds of boys and girls have been introduced to the game with many going on to play club and provincial cricket.

The opportunity to gain selection to GKF’s Under-15 team that competes in the WPCA Youth League provides an added incentive for players. While some cricketers will be sent through to the Under-13 provincial trials for 2019.

Thanks to adidas all players will be fully kitted out, coaches and umpires will don adidas GKF clothing.

In addition there will be plenty of special prizes on offer including adidas bats, balls and gloves. Spur and Coca-Cola will provide the youngsters with refreshments on the day.

The action gets underway from 1pm.