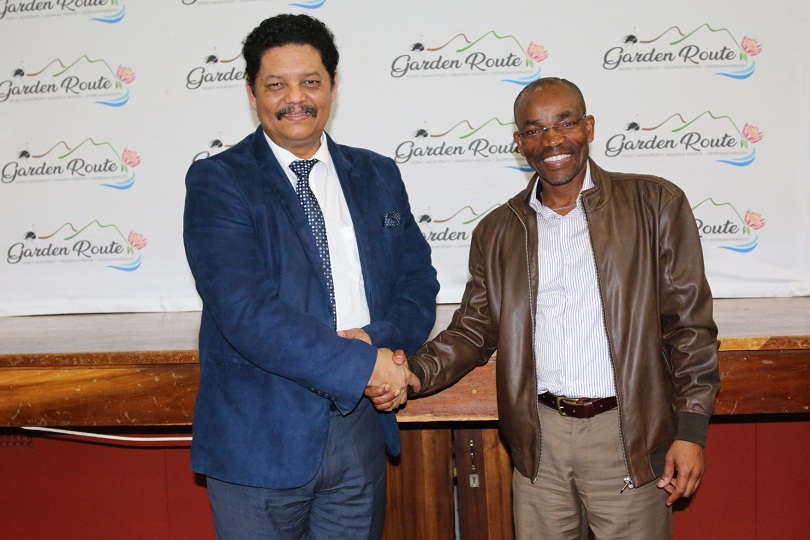 Dignitaries from Government departments, local government, forestry companies, media houses, academic and research institutions, as well as landowners, attended the 2018 Fire Management Symposium at the George Campus of the Nelson Mandela University from 3 to 5 October 2018.

The Garden Route District Municipality (GRDM) sponsored an amount of R100 000 towards this event which attracted more than 200 delegates, both locally as well as abroad.

In officially opening the event on 3 October 2018, Ms Pumeza Nodada, Acting Deputy Director-General for Forestry and Natural Resource Management, acknowledged that only by sharing the scarce resources across public & private sectors, we would be able to give effect to integrated veldt fire management (IFM). She pleaded that continuous efforts by all role players are needed to improve IFM. Ms Nodada also acknowledged the services currently rendered by institutions like Working on Fire and other organisations and highlighted: “These programmes are still contributing greatly to building the concept of integrated fire management”.

Dr Mmaphaka Tau, Deputy Director-General (Head) of the National Disaster Management Centre (NDMC), shared with the delegates that South Africa experiences increasing levels of disaster risks which exposes us to a wide range of weather hazards. “The interplay of these hazards point to the need for an integrated approach and sustainable mechanisms in the management of the risks it poses,” Dr Mmapahaka added.

By using the eco-systems approach, Dr Mmapahaka said: “We must surely by now understand the threat of invasive alien species” and acknowledges that there is a need to prioritise the clearing of these species, as it affects our water security as well”.

Cllr Barend Groenewald, Acting Speaker of GRDM, during his address, on behalf of the GRDM Executive Mayor, Cllr Memory Booysen, emphasised the following: “It is a known fact that all communities are vulnerable to the impact of various types of disasters, especially those who are not as fortunate as others. Many members of society still barely have enough to fulfil their basic human needs.  As decision-makers and administrators who render services to communities, we have to recognise the diversity of our communities, adjust to the challenges of a dynamic environment and most importantly manage situations to the best of our ability with due consideration of scarce resources at our disposal”.

Mr Paul Buchholz, Project Manager of the Environmental work stream of the former Garden Route Rebuild Initiative (GRRI), elaborated on the activities performed soon after the outbreak of the June 2017 fires in the Garden Route and how these activities were maintained. Efforts ensured successful outcomes to prevent further damage to affected areas, e.g. one such activity was the installation of 34 kilometres of fire sausages (soil erosion prevention booms) at the most damaged and affected areas to ensure that sediment does not flow down from higher geographical areas.  Mr Buchholz acknowledged that this could not have been successfully implemented without the assistance of geographic information systems (GIS) to analyse the high-risk areas. A drone was also used to spot the most affected areas in order to prioritise and guide intervention initiatives.

The involvement of communities was also high on the agenda, when various role-players acknowledged that decisions cannot be taken without community inputs.  “We need to include our communities in decision-making processes; we need to have value in the protection of assets e.g. trees, infrastructure etc,” Mr Mr Leo Long, Senior Practitioner for Training and Skills Development at South African Forestry Companies Limited (SAFCOL) said.  “An inclusive evacuation plan needs to be developed and communicated. Identify, communicate and maintain safe areas of which in where the community can actively take part in,” Mr Long highlighted.

Prof. Ed Kirtley, Assistant Dean at the College of Engineering, Architecture and Technology from the Oklahoma State University, also acknowledged the importance of community involvement. Through his presentation which was live-streamed at the event, he advised that formal  and informal leaders need to be engaged with as soon as possible after an event and said: “Authentically engage with the community in decision making, debate conflicting ideas, act, decide and move forward’’ and added that these relationships must be maintained.

Mr Axel Jooste from SAPPI Forestry presented “A Case of Factory Blindness” when he made an example of the case study of the Apollo 1 space mission fire that killed three astronauts of which the accident inquest was the “failure of imagination”.  Mr Jooste posed a question to the audience: “Are we also guilty of oversight: missing, overlooking, lack of imagination, blindness and blind spots?”.

The first day’s event followed by two more days of active participation and a gala evening which the Executive Mayor of GRDM, Cllr Memory Booysen, and former Principal of the Nelson Mandela University in George, Prof. Quinton Johnson, also attended.  At the gala evening, these dignitaries addressed the audience about the issue of the expropriation of land which left many delegates with something important to think about.