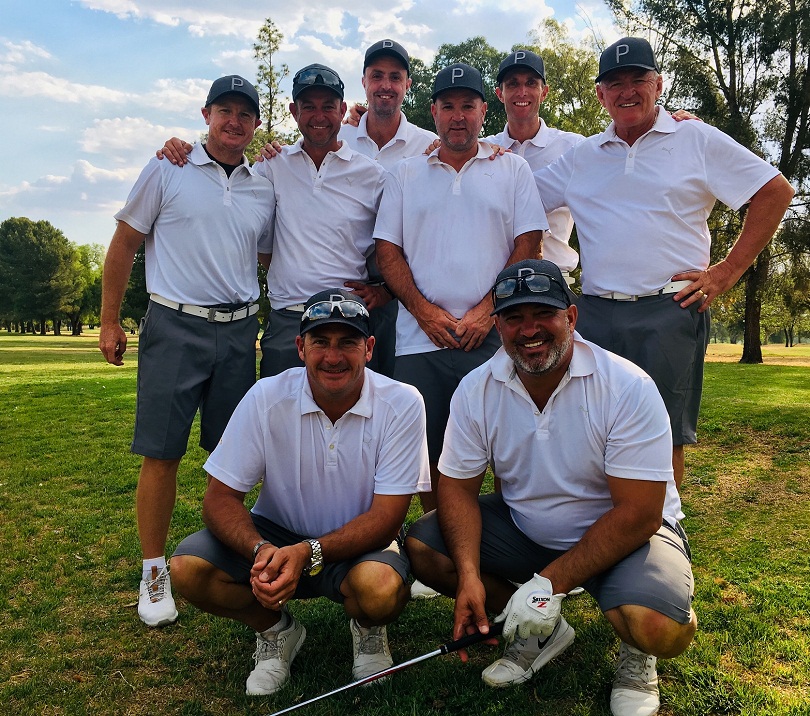 KIMBERLEY, 9 October 2018 – Central Gauteng waged war against Southern Cape and North West to keep their title defence on track in round two of the South Africa Mid-Amateur Inter-Provincial, while Northern Cape made a strong case for promotion at Kimberley Golf Club on Tuesday.

After making a strong start to their title defence with decisive victories over KwaZulu-Natal and Ekurhuleni on day one, Central Gauteng continued on their path of destruction, mowing down Southern Cape 11 – 1 and obliterating North West 12 – 0 on day two.

Significantly, the Lions won 22 games and halved two, banking 23 of the 24 games points on offer in the three-way match.

Central Gauteng enjoyed a clean sweep in their foursomes against North West and led Southern Cape 3.5 – 0.5 after Rory Garton and Shaun Stapleton halved with the Garden Route’s Ian Norgarb and Meyer Potgieter.

The Lions pulled through 8 victories in their singles against North West and everyone but Raad added to their tally against Southern Cape. Raad was 1-up, but Meyer Potgieter squared the match with a par at the 13th. The Central Gauteng golfer hung tough, though, matching his opponent shot-for-shot over the last five holes to halve the game.

“To be honest, the conditions so far have been pretty extreme and challenging for all the players,” said team manager Jaco du Plessis. “We have taken an attitude of focussing on our title defence and making that a priority. The heat, wind, dust and the dryness of the course are all factors everyone has had to deal with, but we’re not letting the conditions deter us.

“We have worked incredibly hard over the last five years to establish a team culture at our IPTs, to get the guys to understand what it means to play for a team and understand that each guy has a job to do.

“It was a really great showing from the whole unit. Neither Southern Cape, nor North West are pushovers. North West had two really tight games on day one that could have gone either way and we all know how determined Southern Cape was to get into the A-Section last year.

“Even though the score line finished in our favour, a lot of the games were really tight. It wasn’t a pushover, and we were fortunate that some bounces and putts went our way. It’s great to start strong and get some wins early in the IPT, but we are not going to get complacent. We’re facing Gauteng North on Wednesday and the Daisies are another tough, determined opponent.”

While Central Gauteng cemented their number one spot in the standings with 8 points and 38 games points, Western Province knocked out KwaZulu-Natal 7.5 – 4.5 to move to second in the log.

Southern Cape routed North West 9.5 – 2.5 to bank two points and move to fifth, behind Gauteng North and Ekurhuleni, who had a second round bye. The two teams will face Southern Cape in a three-way match in Wednesday’s third round.

Eastern Province defeated Border 7 – 5 to overhaul Free State for the top spot in the B-Section battle for promotion.

The side led the foursomes 2.5 – 1.5 and sealed victory with wins from Johnny Ludick, Rhalf Manuel, Hugo Maritz, Ryno Ferreira and a halve from Attie Burger.

Northern Cape also enjoyed a productive day after their first round bye. The local heroes defeated Limpopo and Boland 8 – 4 to grab a share of second with Free State. The two teams lag four games points behind Eastern Province, who edged ahead on 20 games points.