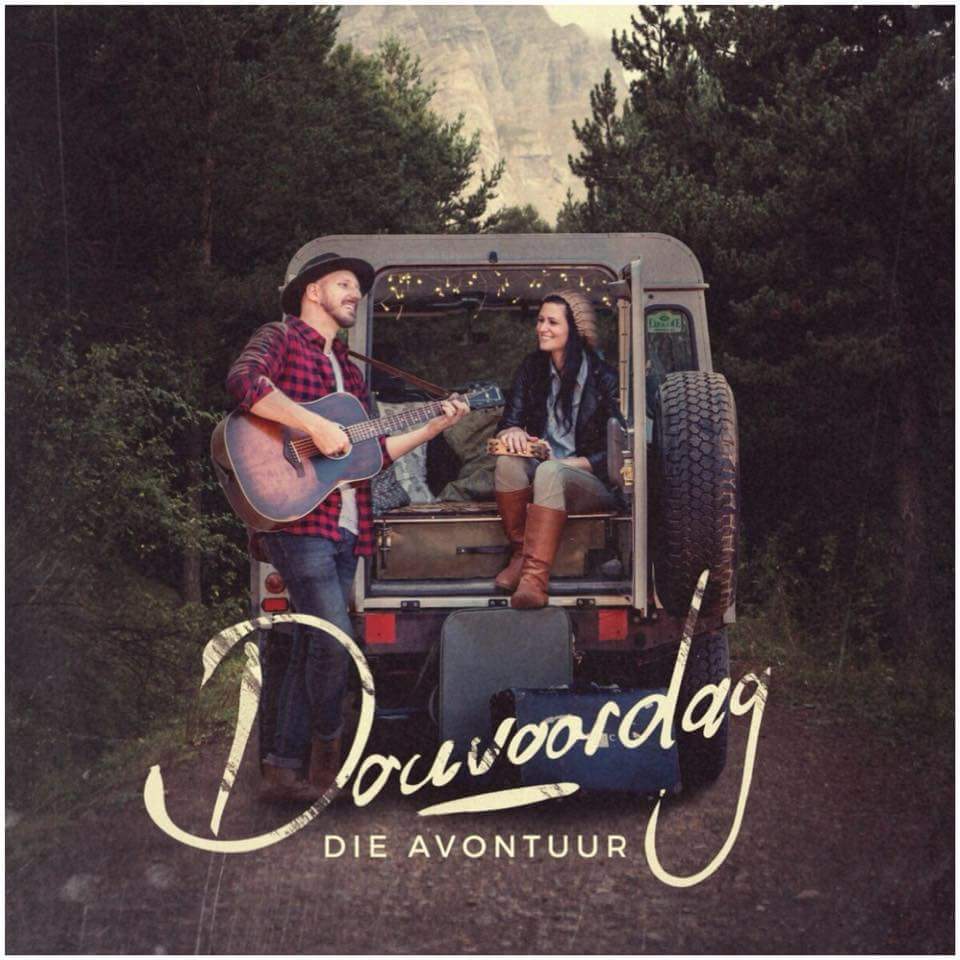 Their latest single, Manifes, can also be heard on various radio stations, across the country, and the music video of this captivating song is currently in eighth position on kykNET’s Top20.

Music lovers have been familiar with the group’s unique sound for some time now. Not only have excerpts of two of their songs been used on the soundtrack of the popular Afrikaans movie, Mooirivier, but their first two singles, Uitsig and Desembers, were also included on the Afrikaans is Groot Volume 8 and Afrikaans is Groot Volume 9 albums, respectively. Another track, Skrapnel, was included on the In Afrikaans Volume 1 album and Hande Vat, the theme song of the TV series, Dorpsdraai that was also written by Jattie, was also included on the In Afrikaans Volume 2 album. During December 2017, DOUVOORDAG was also part of the very first In Afrikaans concert series at Hartenbos, where they shared the stage with well-known musicians such as Jo Black, Leah, Robbie Wessels and Jan de Wet. The concert was attended by more than 6 000 people.

Ilse and Jattie have been singing together since 2008. They originally performed under an English name at weddings and corporate functions, but changed it to DOUVOORDAG when they started creating original Afrikaans music.

Both of them come from musical families and have been singing since school. Ilse was a member of the Stellenberg Girls Choir, Pro Cantu Youth Choir and the Stellenbosch University Choir, and Jattie was part of Affies Boys Choir and the Tukkies Camerata Choir. He also won the prize for Best Original Composition in Tukkies’s annual serenade competition for four consecutive years. Jattie and his group, Vertical, won a SAMA in 2009 for their second album, Stil.

Jattie, a very gifted songwriter, is equally comfortable with writing in Afrikaans and English, as well as creating various genres of music. This is evident by the vast number of diverse artists who have recorded some of his songs, including Louis Brittz (gospel), Zak van Niekerk (humorous), Len Muller (alternative), Dans Dans Lisa, Izak Davel (pop) and Leon Gropp to name but a few. He also wrote material for new upcoming albums by artists like Jo Black, Touch of Class and Roan Ash. Jattie and well-known songwriter and producer, Johan Vorster were also co-creators of the theme song of the television program, Die Groot Ontbyt, called Kom Ons Gaan Groot, which is sung by Jo Black.

Jattie, a registered industrial psychologist with a master’s degree, works as an independent consultant when he is not on stage. Ilse has a B.Com. Honours degree and established herself as a respected name working behind the scenes in the Afrikaans music industry. She has worked for Merchant Music, Coleske Artists and the Atterbury Theater, and was also involved with productions such as Afrikaans is Groot, the Ghoema Music Awards, Gospel Skouspel, Innibos and the In Afrikaans concert series in Hartenbos. She is currently part of the marketing team at a group of companies, called Inhoud Huis Musiek, In Afrikaans and Flagship Productions, who manages artists such as Robbie Wessels, Jo Black, Appel and Roan Ash, and is also the coordinator of the In Afrikaans concert series in Hartenbos, which will be taking place in December.

Jattie is the creative mind behind DOUVOORDAG and is responsible for creating most of the group’s songs.  Their music is a reflection of their own lives and approach to life. One of their most popular songs, Desembers, is about how they first met during a December holiday in 2005. “The songs are paintings of our personal journey of internal discoveries and treasured memories. Some were written as encouragement and others to remind us why we decided to choose this adventure in the first place,” says Ilse. Vir Ren is a song that they wrote for their sixteen month old son and Uitsig was the first song they wrote four years ago, which kick-started this amazing journey for them. Landsberghoek was written by Jattie and is about the memories he made with his siblings on their family farm when they were little.

Jattie was very involved with the production of DIE AVONTUUR and worked with some of the country’s best producers, such as Jake Odendaal and Gideon Botes to complete the final project. DIE AVONTUUR took four years of hard work and they have managed to create something new and different in Afrikaans. “This album is the story of our personal adventure. It is also the story of each and every person who long to have a positive impact on the world,” shares Jattie.

DOUVOORDAG recently launched their album in front of a packed audience at Atterbury Theatre. The launch was attended by several well-known artists like Riana Nel, Robbie Wessels, Kaleidoskoop, Roan Ash, Simoné Nortmann and Johan Vorster. Their debut CD will be released in association with Inhoud Huis Musiek and will be distributed by Universal Musiek.

If you are in the mood for a moving combination of positive, hopeful and upbeat music, DOUVOORDAG’s DIE AVONTUUR is definitely for you.