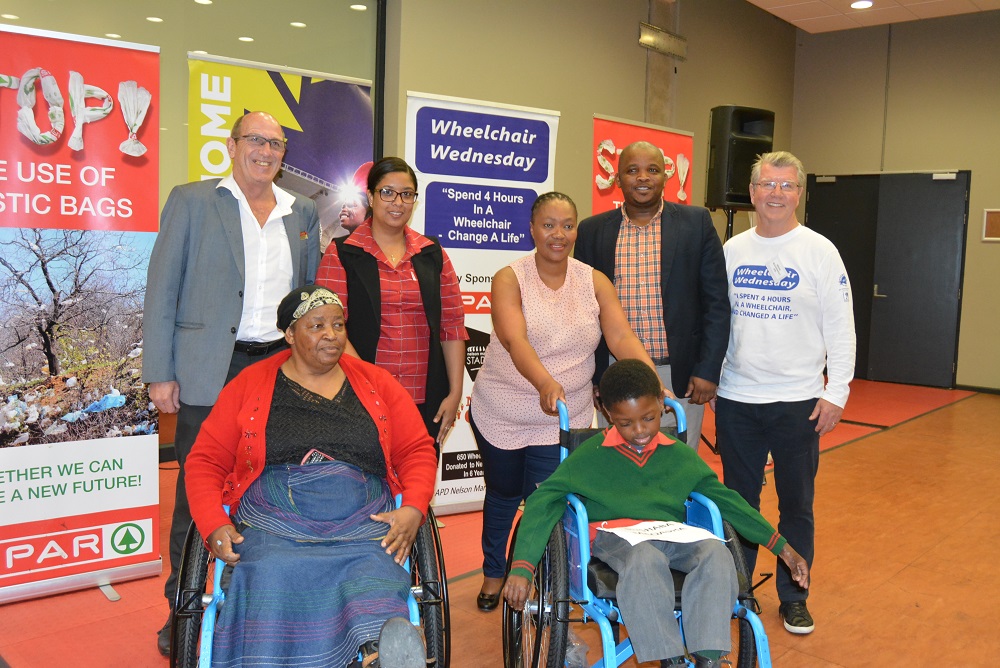 The Wheelchair Wednesday campaign, sponsored by SPAR Eastern Cape, continues to make a massive impact within the physically disabled community, with 180 wheelchairs being handed over this year.

Run each year in Nelson Mandela Bay by the Association for Persons with Physical Disabilities (APD), the project takes place each Wednesday in August when community and business leaders are invited to spend four hours in a wheelchair.

For the first time this year a school became involved when Collegiate schoolgirls joined the project, creating the hope that more young members of the community will be part of the exercise in 2019.

The campaign is aimed at raising awareness about the challenges those with mobility difficulties face in society, as well as generating funds to purchase wheelchairs and to support the APD’s Work Centres for those with disabilities.

APD chief executive Brian Bezuidenhout said they were thrilled to receive support for a second year from Network of Caring, who donated funds to purchase the wheelchairs.

It all came to fruition at a function at the Nelson Mandela Stadium yesterday when a total of 150 wheelchairs were donated to those in need, while a further 30 will be handed over at Jeffreys Bay on October 25.

“We were also able to raise funds totalling just over R460 000 for the APD Work Centres,” said Bezuidenhout.

He added that after seven years they had handed over more than 800 wheelchairs.

“We have donated 818 wheelchairs during this period, plus the 30 to come at Jeffreys Bay, and have had in excess of 1 500 people going through the Wheelchair Wednesday experience.

“Every person who has become involved has had their mind changed and this has been crucial in creating awareness of the many challenges the disabled face.”

SPAR EC sponsorship and events manager Alan Stapleton said Wheelchair Wednesday was a special project in which they were able to join hands with corporates to make a difference for those in need.

“We so often take the simple things in life for granted, but if you spend four hours in a wheelchair you suddenly realise how difficult those things can be,” he said.

“It is also a lesson as to how inadequate some of our facilities are and what we should be doing to improve life for those in wheelchairs.”

He added that everyone who had been part of the campaign would have grown as people from the experience, learning to better understand the needs of others.

“When we give someone our time and we show we care for them we give them hope and where there’s hope, there’s life.

“Most importantly, we have given the chance to more than 150 people to roll out [in their wheelchairs] as they experience a new sense of freedom.

“We may only have scratched the surface but now they have an opportunity to experience the real world and to move out of the confines of a house or a room.”

Stapleton paid special tribute to Bezuidenhout and his APD team for the massive amount of work they put into making the campaign a success.

“Passion is a cornerstone of our philosophy at SPAR and if you want to see passion then you only need to spend time with these guys.

“They are totally committed and that is what makes Wheelchair Wednesday such a success.”