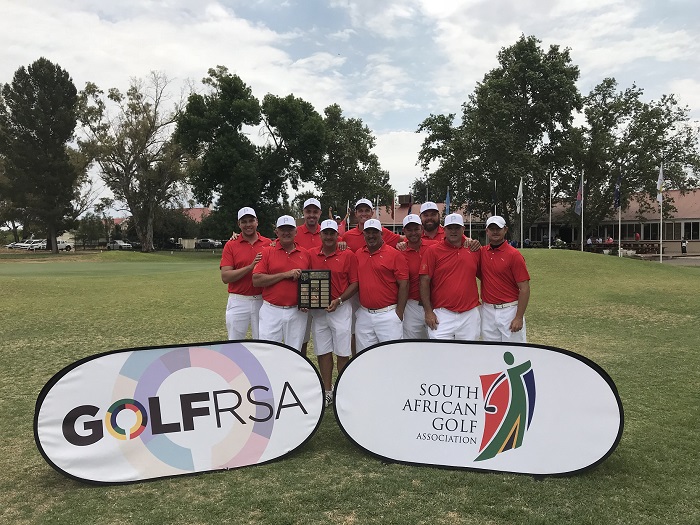 The Lions hit hard and fast on day one to beat KwaZulu-Natal and Ekurhuleni 7. 5 – 4.5 and continued the punishment when they pummelled Southern Cape 11 – 1 on day two. Gauteng North was next on the Red Brigade’s hit list, going down 1.5 – 10.5 on day 3.

With 8 points and 48.5 games points, Central Gauteng successfully defended their title in just three rounds and after a fourth round bye, the side could play stress-free golf on the last day.

“We’d done the hard graft in the first five matches and we set a pretty steep target that no-one could match, but it still felt a little weird to win on our rest day,” said manager Jaco du Plessis.

“It’s always hard to motivate yourself to play on the final day when you’ve won the title already, but we have a rich rivalry with Western Province. We also became the first team to successfully defend the title since we won the first edition in 2006. That was another motivating factor for us to try to finish the week six-for-six.”

Gerlou Roux had to withdraw to attend to a family emergency at home, which meant Western Province had to concede one foursomes game and a singles.

“We started the final round with two points in the bank, but we were sorry to hear that Gerlou’s wife took ill,” Du Plessis said. “Hats off to Western Province, though; as always, we had another ding-dong battle.”

Shaun le Roux and Greg Sheard defeated Central Gauteng rookie Rory Garton and Shaun Stapleton 4 & 3 to take the first scalp, but Steve Williams and Norman Raad got the Lions back on track with a 2 & 1 win.

Kevin Sharp and Wendell Bossenger close out a 3 -1 lead with a 1-up win.

“Norman, Rory and Steve picked up 3 points,” Du Plessis said. “With Ruan Botha’s conceded game we had the 7 points for the win, but Wendell and Ryan Dreyer fought like demons to pull through two halves for an 8 – 4 win. I sent the guys out there to get the job done and they did.

“Norman and Steve have been two real bankers this week. You know, for Steve to win Most Valued Player with 11.5 points at the age of 57 is special; it speaks volumes to his character and his commitment to the team. Ironically, he told us last year he was retiring, but he was the first one to raise his hand when it came to put the team together for our title defence.

“I’m really, really proud of these eight guys. Kimberley was always going to be a tough venue, but there was a whole lot of guys who vied for spots on this team. I am really proud of everyone who put in the effort. It’s sad to hear that there were a whole lot of mid-amateurs at other unions who didn’t make themselves available for the SA Mid-Am IPT because it was played in Kimberley.

“We have worked extremely hard over the last three, four years on our team ethos at Central Gauteng. I told the guys I wanted eight players to come with me to win. We work hard, we practice hard and I don’t want to hear moans and groans. That’s what I got. Eight guys who came to win.”

Central Gauteng finished the week with 12 points and an astonishing 56.5 games count, which was 20 more than second-placed Gauteng North.

“I hope this doesn’t sound arrogant, but I never had a moment where I doubted the team. I knew I had a team out there who wanted to win this and would do everything they needed to, to get the job done.”

Ekurhuleni finished in third with 8 points, Western Province placed fourth with 6 points and KwaZulu-Natal moved to fifth on 4 points after defeating North West 7.5 – 4.5.

Southern Cape avoided the wooden spoon with 2 points from their only victory over North West, who was sent down to the B-Section after a winless week.