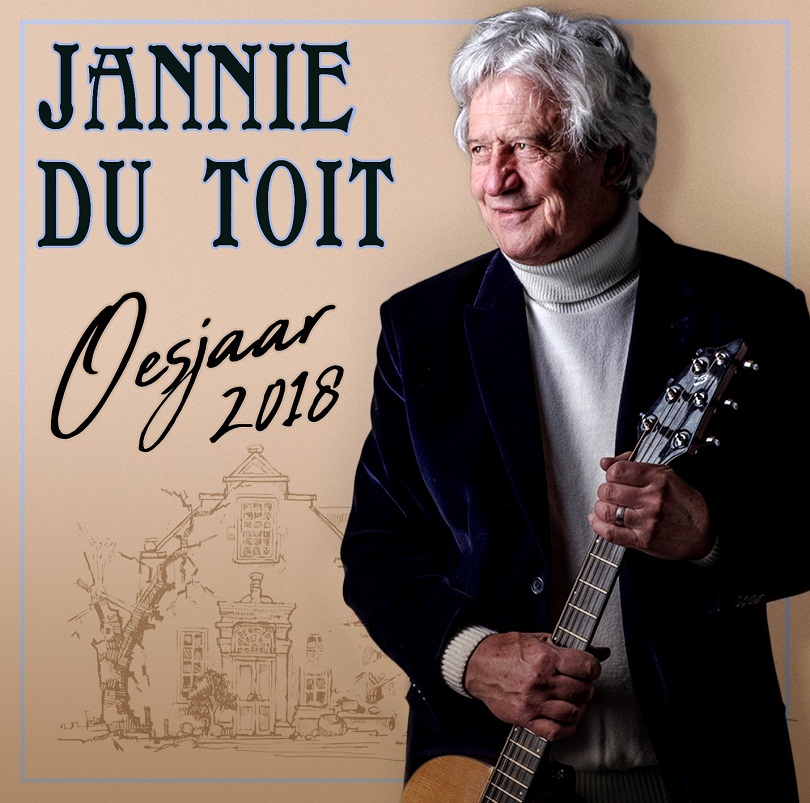 Having spent the past few years performing the music of some of his favourite artists, including Jacques Brel, Jules de Corte, Koos du Plessis and Lucas Maree, Jannie has now shifted his focus back to his first love – writing and performing songs in Afrikaans. The result is a brand new album: OESJAAR.

Fittingly, the first single is a love song. Jannie wrote Jy Kyk Sag for his new wife – he married Therina Wentzel in June after a whirlwind romance – and describes it as his most beautiful love song yet. “I wrote the song for my wife and must admit that it is a personal favourite,” he says. “Besides being a touching love song, it is written in a 60s folk style, making it a little unusual.” Friends and fans who have heard the song agree, revealing that it is even more stirring than Jannie’s evergreen ’n Liedjie Vir Jou.

The new album, titled OESJAAR, is due for release in November. “In a way, OESJAAR is a culmination and celebration of my 48 years as an Afrikaans musician. However, the album only contains songs written this year. It is about what I believe in, what I hope for and about the people and places that has made a difference in my life and still do. I am confident that end result won’t disappoint,” he says.

The themes on the new album are, as always, diverse. In addition to Jy Kyk Sag, OESJAAR includes a heartfelt ode to Christa Steyn, Jannie’s friend, pianist, composer and musical partner of 25 years, both locally and abroad. The title of the song, is a direct quote taken from Christa’s last emotional interview with Coenie de Villiers: Sy Genade Is Genoeg. Koffiekafeetjie reminisces about a coffee shop in Melville artists used to frequent in the 1990s, as well as about Badia Isaacs, who used to the heartbeat of this venue.

Added to OESJAAR as a bonus track is Karen Zoid’s rock version of ’n Liedjie Vir Jou – the original was written exactly 40 years ago – which had the country abuzz when it was recorded by Karen and Jannie for her show Die Republiek van Zoid Afrika. Within an hour of their broadcast, the song had reached the top of the iTunes sales chart.

OESJAAR, arranged by the brilliant Clinton Zerf, will officially be launched during a live concert at Mothership Studios in Philadelphia and at the Atterbury Theatre in Pretoria, respectively, on 11 and 13 November 2018. (The album will be released by Vonk Musiek via iTunes and in stores.)

In what now seems like a lifetime ago, Jannie started his musical career after completing legal and language studies. In the 1970s, when he was still a student, he was part of a pop-rock band, as well as of the Afrikaans folk group Trilogie. He gained fame as a singer-songwriter in 1979 and debuted his solo album, ’n Liedjie Vir Jou, in 1981.

In die 80’s he wrote a musical for Tukkies and in the 90’s his company JNS Musiek promoted less commercial South African Music. He received an honorary award from the South African Academy Arts and Sciences in 2008, as well as a prize for his contribution to the Afrikaans Language at Innibos in 2012.

His most recent venture – before taking on the challenge of creating OESJAAR – was a concert tour in Belgium in the Netherlands in late 2017. In the meantime, projects like Doep Is Nie Dood Nie, Bonjour Monsieur Brel, Kiekies – Lucas se Liedjies and Die eggo van jou Oë, still continues. He also presented his holiday production In Kersfeestyd with his ensemble and an acapella group called Breathe last year, which will be repeated in November 2018.

Jannie counts himself quite privileged to have been doing what he loves for so long. In celebration of his illustrious career, his new album and what has undoubtedly been a vintage year both personally and professionally, Jannie will be touring the Cape in December. Accompanying him on this OESJAAR tour will be a top ensemble comprising Susan Mouton (cello), Chanie Jonker (piano and accordion) and Theuns Botha (percussion).

The following tour dates and venues have been confirmed to promote his new album: